Elon Musk – one of the world’s wealthiest men – wants people to stop referring to him as a billionaire, as he believes the term ‘devalues and denigrates’.

The Tesla CEO, whose personal wealth is estimated at more than £15 billion ($20 bn), made the comments in relation to his involvement in the recent rescue operations in Thailand.

The 47-year-old dispatched engineers from his Boring Company in an attempt to help rescue 12 schoolboys and their football coach trapped in a flooded cave.

Musk took offence at reports which referenced his wealth, sharing his thoughts with his 22 million Twitter followers. 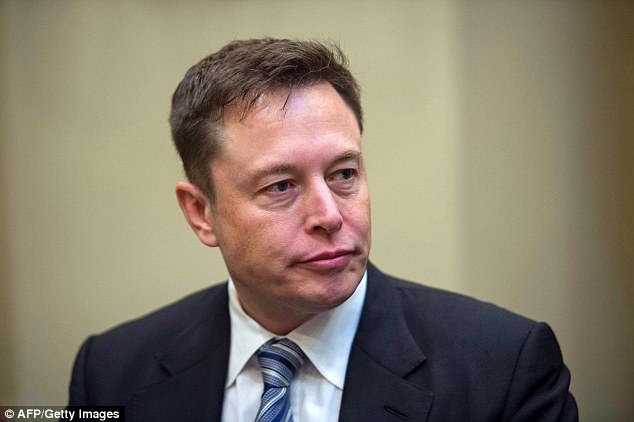 One of the world’s wealthiest men Elon Musk has suggested media coverage of his exploits should refrain from referring to him as a billionaire, as the term devalues and denigrates people. Musk made the comments after his involvement in rescue operations in Thailand

Writing on the social media site, he said: ‘Ironically, the “billionaire” label, when used by media, is almost always meant to devalue & denigrate the subject.

‘I wasn’t called that until my companies got to a certain size, but reality is that I still do the same science & engineering as before. Just the scale has changed.’

Musk proposed several unique strategies to end the crisis, including using an underwater air tube which could be fed into the submerged sections of the cave before inflating it ‘like a bouncy castle’ to create an underwater tunnel. 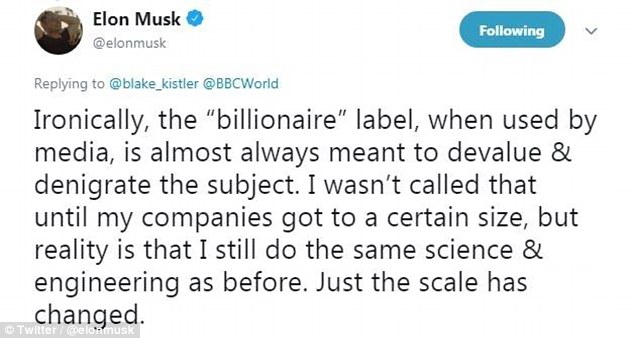 Writing on the social media site, he said: ‘Ironically, the “billionaire” label, when used by media, is almost always meant to devalue & denigrate the subject’ 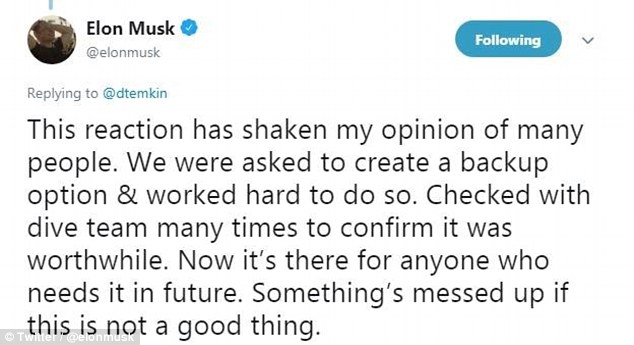 Musk added: ‘This reaction has shaken my opinion of many people. We were asked to create a backup option & worked hard to do so. Checked with dive team many times to confirm it was worthwhile. Something’s messed up if this is not a good thing’

Another solution was to use the firm’s ground penetrating radar to dig holes to reach the boys.

The tech entrepreneur also built a miniature submarine, light enough to be carried by two divers and small enough to squeeze through the cave’s narrow chambers.

However, former provincial governor Narongsak Osottanakorn – who oversaw the successful rescue of the Thai soccer team – rejected the billionaire’s offer of the mini sub as ‘not practical for the mission’.

In response to coverage of his efforts,  Musk added: ‘This reaction has shaken my opinion of many people. We were asked to create a backup option & worked hard to do so.

‘Checked with dive team many times to confirm it was worthwhile. Now it’s there for anyone who needs it in future. Something’s messed up if this is not a good thing.’ 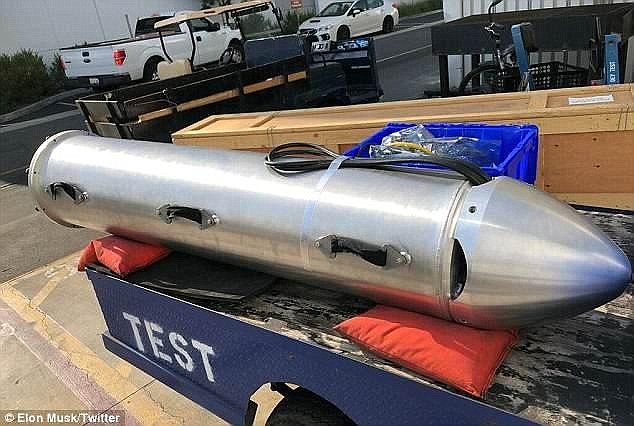 The entrepreneur built a miniature sub, light enough to be carried by two divers and small enough to squeeze through the cave’s narrow chambers. However Narongsak Osottanakorn – who oversaw the successful rescue – rejected it as ‘not practical for the mission’ 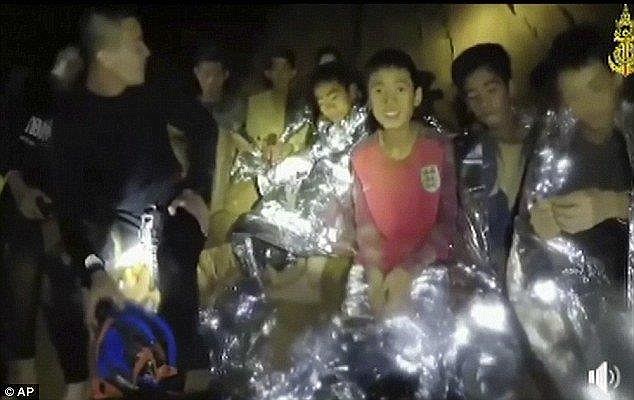 The 47-year-old also dispatched engineers from his Boring Company to help rescue the 12 schoolboys and their football coach who were trapped in the cave. All 12 players and their coach have now been rescued after spending more than two weeks underground

This is not the first time that Musk has taken aim at the world’s media, launching another Twitter tirade in May, this time aimed at the media’s coverage of his electric car company, Tesla.

Musk took ‘big media companies’ to task in a series of tweets, saying the public doesn’t respect them anymore because of their ‘holier-than-thou hypocrisy’ and  because they ‘claim to the truth, but publish only enough to sugarcoat the lie’.

After a reporter from the Verge retorted by calling him a ‘media-bating Trump figure,’ Musk sharply replied by saying President Donald Trump was elected because no one believes the media anymore.

He rounded out the spectacle by saying that he plans to create a site called ‘Pravda’, a reference to the state-run Russian news agency, where people can rate journalists.

Specifically, they’d be able to rate the ‘core truth of any article and track the credibility score over time of each journalist, editor and publication,’ according to Musk.

WHAT WAS ELON MUSK’S PLAN TO SAVE THE THAI CHILDREN TRAPPED IN FLOODED TUNNELS?

Twelve young footballers and their 25-year-old coach became trapped in a flooded cave system in Thailand on June 23, 2018.

Divers and other rescue worker worked frantically to come up with a plan to free the youngsters imprisoned in the Tham Luang Nang Non caves.

On July 6, almost two weeks later, billionaire Elon Musk shared suggestions for those working on the ground after receiving tweets requesting his input. 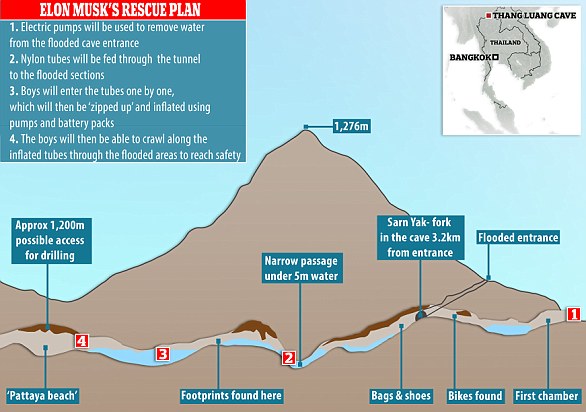 Elon Musk said his Boring Co, which digs tunnels for advanced transport systems, could feed a nylon tube into the submerged sections of the cave before inflating it ‘like a bouncy castle’ to create an underwater tunnel.

Musk also committed to sending top engineers from his Boring Co. and SpaceX companies to help free the trapped schoolchildren.

According to the Tesla CEO, rescuers could use electric pumps to remove water from flooded entrance of the cave network – eliminating one of the bodies of water those trapped would need to cross.

Nylon tubes measuring some 3ft (1m) in diameter could then be fed through the cave network to the flooded sections.

Battery packs and air pumps would be used to inflate the nylon tubes, submerged underwater. These tubes would provide an escape tunnel the children could crawl through to safety, Musk suggests.

However, Professor John Gunn from the School of Geography, Earth and Environmental Sciences at the University of Birmingham and chair of the cave research association, had reservations about details of the scheme.

He said: ‘If you imagine a tunnel under London flooded, this this would be straight with a few bends.

‘However, this is more like asking to thread a pipe through all the aisles of a supermarket, up the stairs, down the stairs and then back through the aisles and also in total darkness and underwater.

‘You can see it is more complicated. If he was proposing the pipe is moved by divers then I think that’s a non-starter.’