Engineers create a material similar to that produced in Chernobyl

A substance has been made in a laboratory which mimics an extremely dangerous material created during the nuclear reactor disasters of Chernobyl and Fukushima.

The material is intentionally similar to the Lava-like Fuel Containing Materials (LFCMs) created by the extreme and unique conditions only found during a nuclear meltdown.

Researchers from the University of Sheffield say it is so radioactive it cannot be safely studied and its properties remain a mystery to scientists.

This means it cannot be removed from the sites and is therefore obstructing decommission efforts and posing an ongoing radiological risk to the environment.

The artificial version is similar in its structure and properties to the enigmatic original material, which means it behaves in a similar way but is safe to use.

Scientists hope this material can aid in the creation of tools and processes to help rid the sites of LFCMs and aid in decommissioning them.

A substance has been made in a laboratory (pictured) which mimics an extremely dangerous material created during the nuclear reactor disasters of Chernobyl and Fukushima. The material is intentionally similar to the Lava-like Fuel Containing Materials (LFCMs) 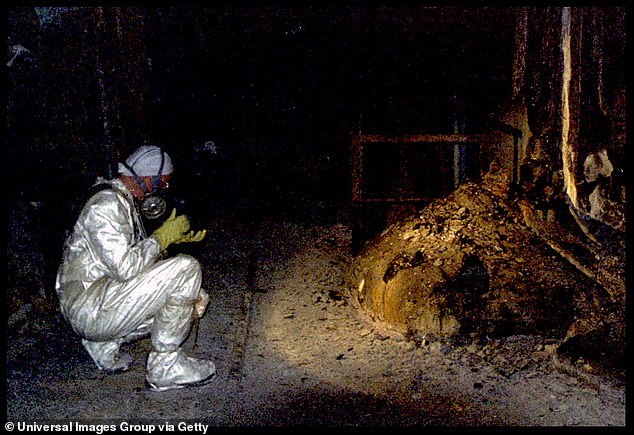 The 100-ton mass of the glass-like lava at Chernobyl spread to sub-reactor rooms, solidifying in large masses and creating, among other things, the infamous ‘elephants foot’ (pictured) 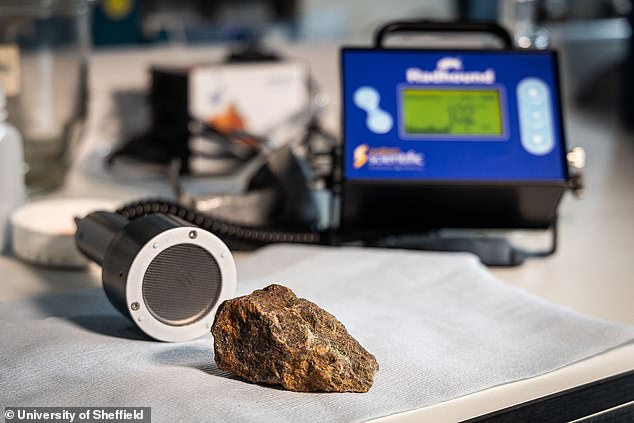 Researchers from the University of Chernobyl created a material designed to replicate the highly-radioactive rocks created in unique conditions to form Lava-like Fuel Containing Materials (LFCMs). Pictured, a Chernobyl rock

Chernobyl’s catastrophic meltdown on April 26, 1986 ’caused 31 direct deaths and a mass evacuation from a 30-km exclusion zone surrounding the reactor, that remains in place today’, the authors write in their study, published today in the journal Nature Materials Degradation.

The formation of LFCMs at Chernobyl is well-known and the problems they pose are well documented.

LFCMs are a mixture of highly radioactive molten nuclear fuel and building materials that fuse together.

For example, during the meltdown of Chernobyl’s reactor core, temperatures exceeded 1600°C and the uranium fuel melted with the zirconium cladding.

This formed a radioactive molten mush that remained at an extremely high temperature. Propelled by its own weight, it then mixed with steel, concrete, serpentine and sand.

The 100-ton mass of the glass-like lava then spread to sub-reactor rooms, solidifying in large masses and creating, among other things, the infamous  ‘elephants foot’.

The researchers say there are relatively few samples of meltdown materials available for study and creating an artificial version is the best option.

Dr Claire Corkhill from the University of Sheffield’s Department of Materials Science and Engineering said: ‘Understanding the mechanical, thermal and chemical properties of the materials created in a nuclear meltdown is critical to help retrieve them, for example, if we don’t know how hard they are, how can we create the radiation-resistant robots required to cut them out?’ 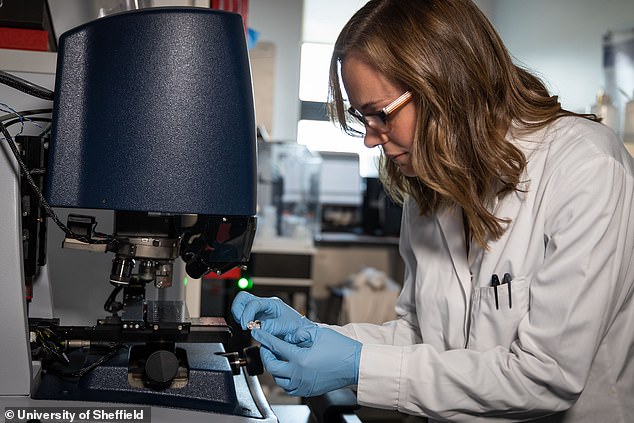 The team of researchers developed the material in the lab to try and imitate the ‘truly unique nuclear materials’ at the centre of Chernobyl and Fukushima. They have a similar internal structure, composition and behaviour to the real thing

The team of researchers developed the material in the lab to try and imitate the ‘truly unique nuclear materials’ at the centre of Chernobyl and Fukushima.

They have a similar internal structure (as confirmed by scanning electron images), composition and behaviour to the real thing.

Researchers suspect LFCMs have also formed at the site of Fukushima’s doomed nuclear power plant, which was destroyed by an earthquake in 2011.

It killed more than 21,000 people and the reactor is now still submerged in water used to cool the melted core.

Dr Corkhill is collaborating with researchers at the University of Tokyo and the Japan Atomic Energy Agency to see what happens to the highly radioactive dust that billows out from the surface of LFCM when water is removed.

Dr Corkhill added: ”Thanks to this research, we now have a much lower radioactivity simulant meltdown material to investigate, which is safe for our collaborators in Ukraine and Japan to research without the need for radiation shielding.

‘Ultimately this will help advance the decommissioning operations at Chernobyl and also at Fukushima too.’

WHAT HAPPENED DURING THE 1986 CHERNOBYL NUCLEAR DISASTER?

On April 26, 1986 a power station on the outskirts of Pripyat suffered a massive accident in which one of the reactors caught fire and exploded, spreading radioactive material into the surroundings.

More than 160,000 residents of the town and surrounding areas had to be evacuated and have been unable to return, leaving the former Soviet site as a radioactive ghost town.

A map of the Chernobyl exclusion zone is pictured above. The ‘ghost town’ of Pripyat sits nearby the site of the disaster

The exclusion zone, which covers a substantial area in Ukraine and some of bordering Belarus, will remain in effect for generations to come, until radiation levels fall to safe enough levels.

The region is called a ‘dead zone’ due to the extensive radiation which persists.

However, the proliferation of wildlife in the area contradicts this and many argue that the region should be given over to the animals which have become established in the area – creating a radioactive protected wildlife reserve.

a, create, engineers, material, Si
You may also like: