Face-scanning AI hires based on your facial movements, words and voice

Forget a resume! Face-scanning AI scores candidates’ facial movements, words and voice to determine how qualified they are for a job position

Your resume may not be the only deciding factor for landing your next job – it could be an ’employability score’ created by artificial intelligence that has the final vote.

More than 100 big name firms are using HireVue’s AI-driven assessment, which is technology that ranks candidates based on their facial movements, choice of words and speaking voice.

Although employers can pursue any candidate, many who have been interviewed by the AI have found that firms usually focused on those the computer system liked best. 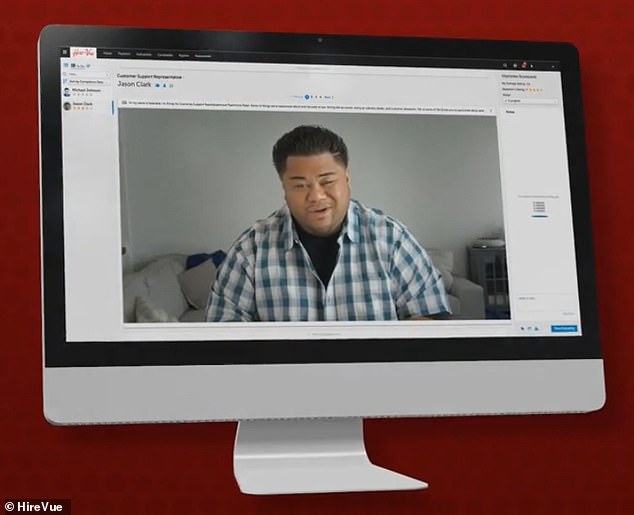 More than 100 employers are using HireVue’s AI-driven assessment that ranks candidates based on their facial movements, choice of words and speaking voice

HireVue’s technology is employed by many large name companies such as Hilton Hotels, Unilever and Goldman Sachs, according to The Washington Post.

And with hundreds of applications flooding in for just a single position, the AI has made it easy for human employers to find the perfect candidate — but some experts believe the technology can do more harm than good.

Candidates connect to HireVue’s system via their smartphone, tablet or computer.

Questions will pop-up on the screen that they answer.

The AI analyzes their facial movements, voice tone and choice of words during the 30-minute interview.

Following the HireVue test, the AI creates a report card based on  their ‘competencies and behaviors,’ including their ‘willingness to learn,’ ‘conscientiousness & responsibility’ and ‘personal stability.’

These personality traits then group individuals into high, medium and low tiers based on their ‘likelihood of success.’

Meredith Whittaker, a co-founder of the AI Now Institute, a research center in New York, said, ‘It’s a profoundly disturbing development that we have proprietary technology that claims to differentiate between a productive worker and a worker who isn’t fit, based on their facial movements, their tone of voice, their mannerisms.’

‘It’s pseudoscience. It’s a license to discriminate,’ she added.

‘And the people whose lives and opportunities are literally being shaped by these systems don’t have any chance to weigh in.’

Nathan Mondragon, HireVue’s chief industrial-organizational psychologist, told The Post the interviews are about 30 minutes and include more than a dozen questions that can ‘yield up to 500,000 data points’, which create the individual’s personal score.

Questions are created by the employer, which are shown on the device for the interviewee to see and answer. 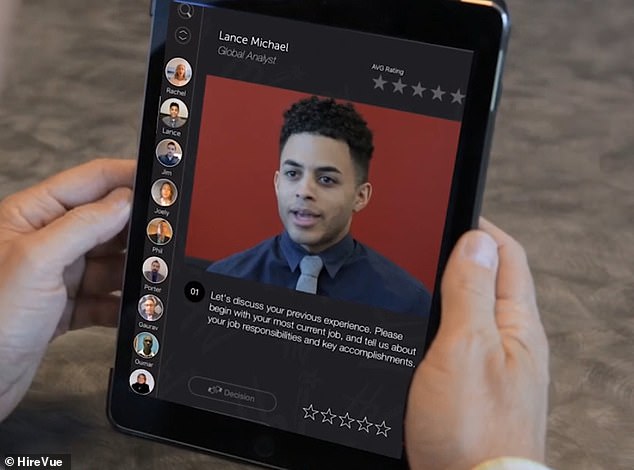 The system connects to the candidate’s smartphone, tablet or computer camera, allowing the potential employers to not only see them, but also gives the AI system a front row seat to the candidate’s facial movements, word choice and speaking voice

During this part of the interview, the AI monitors the person’s facial movements, which can reveal how excitable they are is or how easily angered they can be.

The AI gathers information from the interview and ranks what it has learned about the candidate against other applicants who have also interviewed for the same position.

Those ‘Facial Action Units,’ Mondragon said, can make up 29 percent of a person’s score; the words they say and the ‘audio features’ of their voice, like tone, determine the rest. 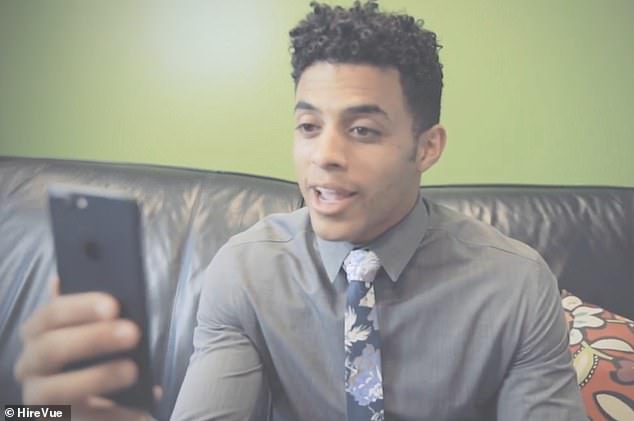 The AI creates a report card based on ‘competencies and behaviors,’ including their ‘willingness to learn,’ ‘conscientiousness & responsibility’ and ‘personal stability.’ These personality traits then group individuals into high, medium and low tiers based on their ‘likelihood of success’

‘Humans are inconsistent by nature. They inject their subjectivity into the evaluations,’ Mondragon said.

The system is trained using interviews from current employees in the position and their responses are crosschecked with a ‘benchmark of success’ , such as how well they met a sales quotas or how quickly they’d resolved customer calls.

And the best candidates for the position tend to mirror those who have already excelled in the position.

Following the HireVue test, the AI creates a report card based on  their ‘competencies and behaviors,’ including their ‘willingness to learn,’ ‘conscientiousness & responsibility’ and ‘personal stability.’

These personality traits then group individuals into high, medium and low tiers based on their ‘likelihood of success.’

Although employers can choose who to purse, several candidates who have gone through the HireVue process told The Post that they usually focused on those the computer system liked best.

AI, based, Face-scanning, hires, O
You may also like: