Facebook reveals record quarter as profits soar 61% to $6.9 BILLION and users continue to flock to the platform despite its string of privacy disasters

Facebook on Wednesday reported huge revenue increases and sizable user growth for its fourth quarter, despite it facing a difficult year riddled with privacy scandals and waning trust among users.

The social media giant said profits soared by 61 percent from a year ago to $6.9 billion.

Revenue came in at $16.9 billion, which trumped Wall Street’s expectations of $16.3 billion.

The blowout results pushed Facebook’s stock higher by 11 percent to $168.21 in after-hours trading. 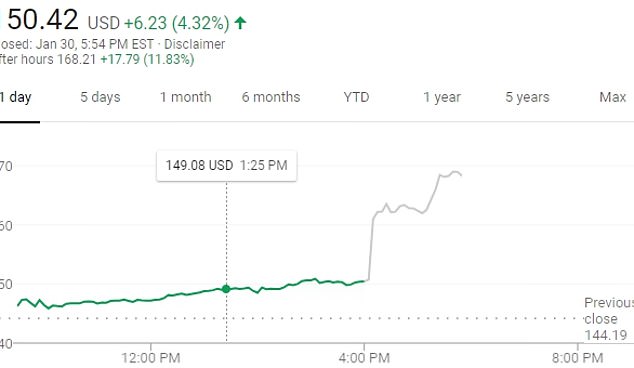 Facebook reported better-than-expected results for the fourth quarter late Wednesday. Shares of the social media giant soared 7.7% in after-hours trading on the back of the report

In a call with investors, Facebook CEO Mark Zuckerberg acknowledged Facebook continues to confront ‘important opportunities and challenges’ and that it still has ‘a lot of work to do.

He called out Facebook’s investments in security, ‘reducing viral videos’ and cleaning up fake accounts on the platform.

‘We had a number of substantive issues that we needed to address,’ Zuckerberg explained.

Some of these ‘increased costs and reduced revenues,’ he added.

‘But I believe these investments are the right thing to do and will make our business stronger over the long term,’ Zuckerberg said.

The shock decision would mean that all of Facebook’s sprawling social media properties would be integrated for the first time.

‘We’re really early in thinking through this,’ Zuckerberg explained. 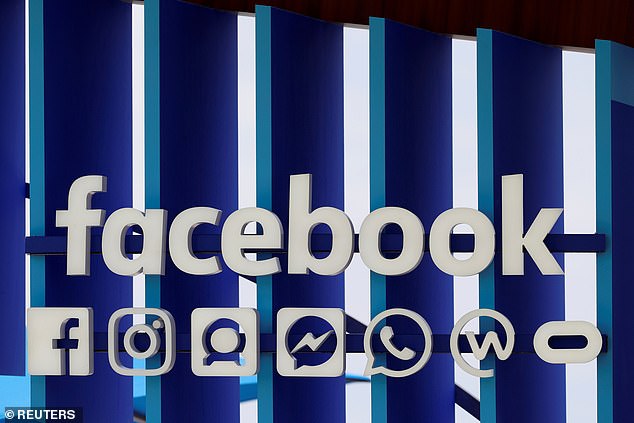 The social media giant said profits soared by 61 percent from a year ago to $6.9 billion. Revenue came in at $16.9 billion, which trumped Wall Street’s expectations of $16.3 billion

‘There’s a lot more we need to figure out before we finalize the plan. This will be a long term project that will be – to whatever extent we end up doing it – a 2020 thing or beyond.

He said it will ultimately benefit user experience, adding things like end-to-end encryption, across all of its services and improving security as a result.

End-to-end encryption protects messages from being viewed by anyone except the participants in the conversation.

Zuckerberg also emphasized that the integration was not being considered ‘for commercial reasons,’ such as more advertising opportunities.

The company was helped by growth in its Instagram business and a steady rise in advertising spending by companies.

Monthly active users rose to 2.32 billion, in line with estimates.

Average revenue per user, or the amount of money squeezed out of each user, came in at $7.37, which was way above Wall Street’s estimated $7.11. 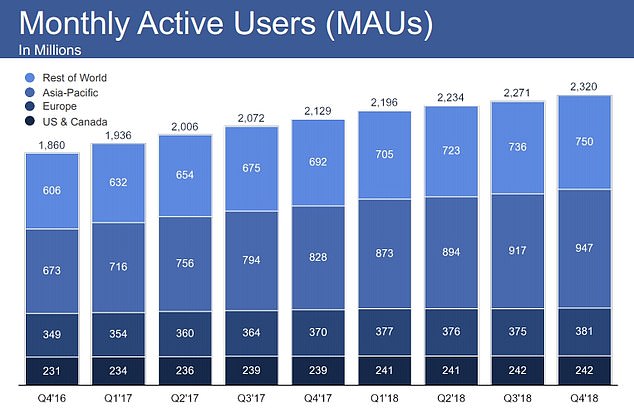 Facebook’s recent string of privacy scandals didn’t seem to impact monthly active users or daily active users, both of which saw increases in the fourth quarter compared to last year 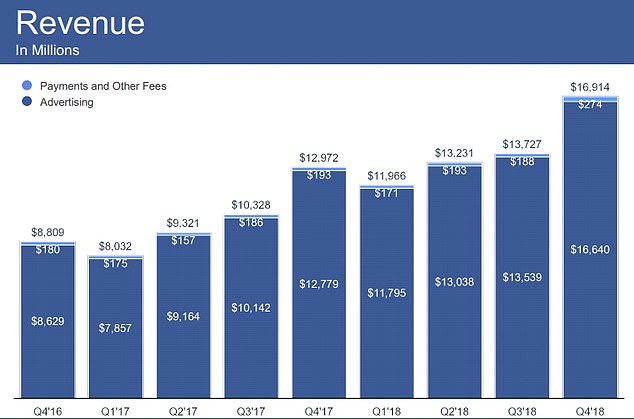 Revenue grew 30 percent year-over-year in the fourth quarter. Facebook is looking to rebound from a horrific year marked by a series of scandals over data protection and privacy and concerns that it had been manipulated by foreign interests for political purposes

‘Our community and business continue to grow,’ Zuckerberg said in a statement.

‘We’ve fundamentally changed how we run our company to focus on the biggest social issues, and we’re investing more to build new and inspiring ways for people to connect.’

The glowing earnings report shows that Facebook’s string of recent privacy scandals hasn’t made a dent in its business model.

Facebook is looking to rebound from a horrific year marked by a series of scandals over data protection and privacy and concerns that it had been manipulated by foreign interests for political purposes.

The company so far has been able to keep revenue momentum thanks to its unique advertising model.

Its global user base has risen to more than 2.2 billion, although growth has stalled in North America and Europe.

Analysts say the trust issue is key for Facebook if it wants to move forward on its mission to connect the world.

‘Facebook needs a fresh start in 2019, and what it reveals about its usage and revenue… will tell us just how feasible that fresh start will be,’ said eMarketer principal analyst Debra Aho Williamson.

‘In order for Facebook to move forward, it needs to show that its daily and monthly active user counts in the US and Canada and in Europe have stabilized, and that its ability to grow its ad revenue in those important regions has not been seriously impacted by the scandals and investigations of 2018.’