Follow
Home » Science » Feline friendly: Slow-blinking at a cat is their version of SMILING

Feline friendly: Slow-blinking at a cat is their version of SMILING

Feline friendly: ‘Slow-blinking’ at a cat is the moggy version of SMILING and provides ‘positive communication’ between you and your pet, study finds

Cats, unlike dogs, are notoriously unfriendly and hard to win over, even for their owners.

Now scientists have discovered a sure-fire way to win a feline over, and it centres around partially closing your eyes.

The subtle movement of a ‘slow blink’ is the cat equivalent of a human smile and allows a rapport to build up between human and animal, scientists say. 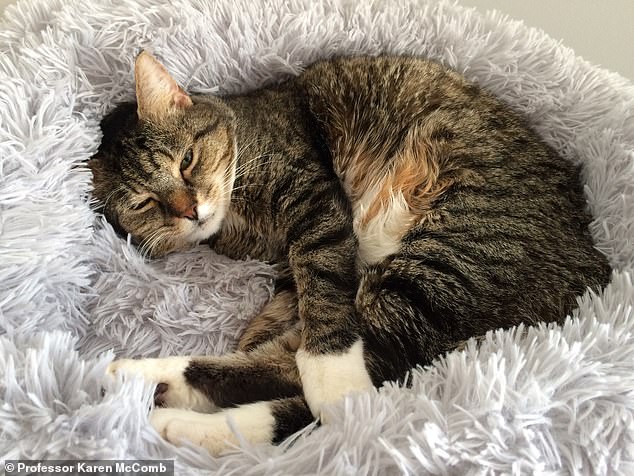 The subtle movement of a ‘slow blink’ is akin to a cat’s smile and allows a rapport to build up between human and animal, scientists say

Pictured, the cat slow blink sequence, starting from a neutral face moving to a half blink, then towards eye closure and then eye narrowing expression

A slow blink is defined as bringing the eyelids together, but not completely shutting the eye.

Researchers say the eye lids should come slightly together, like they do during a relaxed smile, and then close the eye completely for a couple of seconds.

Researchers from the universities of Sussex and Portsmouth conducted two experiments to see what a person can do to help them make friends with frosty moggies.

The first involved 21 cats from 14 households and researchers went round to visit the animals at their home.

Academics taught the owners how to properly slow blink, and once the cat settled down, the owner went and sat three feet in front of their pet.

It revealed that when an owner executes a so-called slow blink, the cat is far more likely to return the gesture than it is to do it randomly.

As a stranger, the researchers wanted to know if the action was universal, or reserved for pre-existing relationships.

The scientists either slow-blinked or held a neutral expression while extending their hand to the pet and video cameras recorded how the animal reacted.

The research, published in the journal Scientific Reports, found that if a stranger slow blinks, a cat is more likely to approach.

Researchers say this is proof that slow blinking acts as a form of ‘positive communication’.

Professor Karen McComb, from the School of Psychology at the University of Sussex, says the findings will reaffirm what many cat owners already suspect, you really can communicate with your cat.

‘This study is the first to experimentally investigate the role of slow blinking in cat–human communication,’ she says.

‘And it is something you can try yourself with your own cat at home, or with cats you meet in the street. It’s a great way of enhancing the bond you have with cats.’

Dr Tasmin Humphrey, lead author of the study from the University of Sussex, says: ‘Our findings could potentially be used to assess the welfare of cats in a variety of settings, including veterinary practices and shelters.

‘In terms of why cats behave in this way, it could be argued that cats developed the slow blink behaviours because humans perceived slow blinking as positive.

‘Cats may have learned that humans reward them for responding to slow blinking.

‘It is also possible that slow blinking in cats began as a way to interrupt an unbroken stare, which is potentially threatening in social interaction.’