Fernando Corbató, a Father of Your Computer (and Your Password), Dies at 93

Fernando Corbató, whose work on computer time-sharing in the 1960s helped pave the way for the personal computer, as well as the computer password, died on Friday at a nursing home in Newburyport, Mass. He was 93.

His wife, Emily Corbató, said the cause was complications of diabetes. At his death he was a professor emeritus at the Massachusetts Institute of Technology.

Dr. Corbató, who spent his entire career at M.I.T., oversaw a project in the early 1960s called the Compatible Time-Sharing System, or C.T.S.S., which allowed multiple users in different locations to access a single computer simultaneously through telephone lines.

At the time, computing was done in large batches, and users typically had to wait until the next day to get the results of a computation.

In a 1963 public television interview, Dr. Corbató described batch processing as “infuriating” for its inefficiency. The advent of time-sharing, however, reinforced the notion, still in its infancy, that computers could be used interactively. It was an idea that would animate the computing field for decades.

“Long before personal computers made it possible for each person to have a computer, time-sharing transformed the way people used computers,” said Stephen Crocker, a computer scientist and internet pioneer who worked on time-sharing systems.

Dr. Corbató explained his time-sharing methods in the 1963 interview, with the reporter John Fitch, broadcast as part of the WGBH series “M.I.T. Science Reporter.” In place of an actual bulky computer of the day, he used a modified electric typewriter mounted on a box of electronics.

Computers, he said on the program, were so expensive to use that any idle time was a huge waste. But with time-sharing, computer time was carefully metered and wasted time all but eliminated.

The computer could carry out only one operation at a time, by means of a so-called supervisor program. Yet it worked so quickly that it could skip from one job to another, with users never noticing any lag.

Each user “would be able to create and modify and execute programs interactively, as if he or she had sole control of the computer,” the science writer M. Mitchell Waldrop wrote in “The Dream Machine,” his 2001 book on the personal computing visionary J. C. R. Licklider.

In the WGBH interview, Dr. Corbató likened the supervisor program to a chess master playing against many opponents at once, letting them ponder their next moves while the master raced from board to board.

When Dr. Corbató was overseeing the C.T.S.S. project, computers were considered little more than giant calculators. But when his team demonstrated the new system in late 1962, that view was beginning to change.

“To this day I can still remember people only realizing when they saw a real demo: ‘Hey, it talks back. Wow! You just type that and you got an answer,’ ” he said in a 1989 interview with the Charles Babbage Institute at the University of Minnesota, an archive and research center specializing in information technology.

C.T.S.S. gave rise to a successor project called Multics, which Dr. Corbató also led. He told the Babbage Institute, “Multics started out as kind of a wish list of what we would like to see in a big computer system that might be made as a commercial model.”

Multics was a collaboration among M.I.T., AT&T’s Bell Laboratories and General Electric. It failed as a commercial endeavor, but it inspired a team of computer scientists at Bell Labs to create Unix, a computer operating system that took root in the 1970s and was adopted widely in the ′80s and ′90s.

The early work done in computing at M.I.T., in which Dr. Corbató played a central role, helped confer legitimacy on computer science as a field of inquiry. “It was really the beginning of the computer science community,” he said.

In the WGBH interview, Dr. Corbató showed that he could type commands on the modified typewriter and that the computer would respond instantaneously. The typewriter’s ball head began spinning, and words appeared on the paper as if the machine were possessed.

“The really frightening part is that we’ve made the computer extremely easy to use,” he presciently told Mr. Fitch. “So it will be used more and more.”

Fernando José Corbató was born on July 1, 1926, in Oakland, Calif., to Hermenegildo and Charlotte (Carella Jensen) Corbató. His father, a native of Villarreal, Spain, was a professor of Spanish literature. When he joined the faculty of the University of California, Los Angeles, in 1930, the family moved south.

Dr. Corbató, familiarly known as Corby, entered U.C.L.A. in 1943. Seven months into his first year, with World War II having begun, he was recruited by the Navy to train as an electronics technician.

The Navy needed people to service, maintain and “debug an incredible array of equipment being foisted on the ships,” he told an interviewer for the Computer History Museum in Mountain View, Calif., in 2006.

The experience, he said, gave him his lifelong interest in tracking down errors and debugging systems.

When he left the Navy in 1946, he entered the California Institute of Technology on the G.I. Bill. He graduated in 1950 with a bachelor’s degree in physics and entered M.I.T. as a graduate student that fall.

His doctoral thesis in molecular physics called for large calculations, which required the use of a computer.

“It was very laborious type work and in retrospect kind of dull,” he told the museum. “But it taught me how to get a complete hands-on feel for working with programs, organizing them and learning the ropes of how to use a computer.” He received his Ph.D. in physics in 1956.

Gradually, he added, “I got more interested in the calculator than I did in the problem.”

Dr. Corbató encouraged those who worked for him to design and implement software iteratively — what is now a popular approach to programming called agile software development.

“Corby taught us to lay out the ideal system, see how to implement as much of that system as possible within constraints, then update our notion of what the ideal was,” said Tom Van Vleck, a computer scientist who worked for Dr. Corbató in the 1960s.

In the course of refining time-sharing systems in the 1960s, Dr. Corbató came up with another novelty: the computer password.

C.T.S.S. gave each user a private set of files, but the lack of a login system requiring a password meant that users were free to peruse others’ files.

“Putting a password on for each individual user as a lock seemed like a very straightforward solution,” Dr. Corbató told Wired magazine in 2012. The passwords for C.T.S.S. are widely considered to be among the earliest computer security mechanisms. 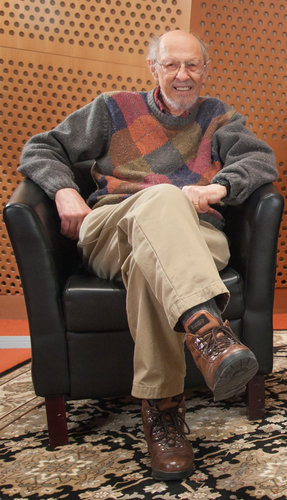 In 1990, Dr. Corbató received the A. M. Turing Award, widely considered the computing field’s equivalent of the Nobel Prize.

Dr. Corbato’s inclination to debug problems spread beyond computer systems. In 1974, soon after he met his second wife, a pianist, Dr. Corbató attended a recital at which she performed.

“Afterwards he asked me why, if I practiced for so long and so hard on this piece, were there still errors?” Ms. Corbató said. “That pretty much summed him up.”

“It was an intellectual question,” Mr. Van Vleck said. “He was asking: ‘What’s the process that leads to errors after practicing so much, and what do you need to do? Do you need a bigger font on the score? Better illumination? Bigger piano keys?’ ”

Computers and the In, Obituary
You may also like: