Love is blind! Fish in African lake that’s so murky they can’t recognize their own species create evolutionary boom through accidental inter-species mating

At first glance, the fish you might see swimming through to waters of Lake Mweru might not look that different.

To scientists studying life in the lake on the border between Zambia and the Democratic Republic of the Congo, the fish population are a model of extraordinary diversity.

This week, researchers published findings from a decade spent researching the fish in Lake Mweru and other freshwater lakes in the region, concluding that their unexpected diversity may have an even more unexpected cause. 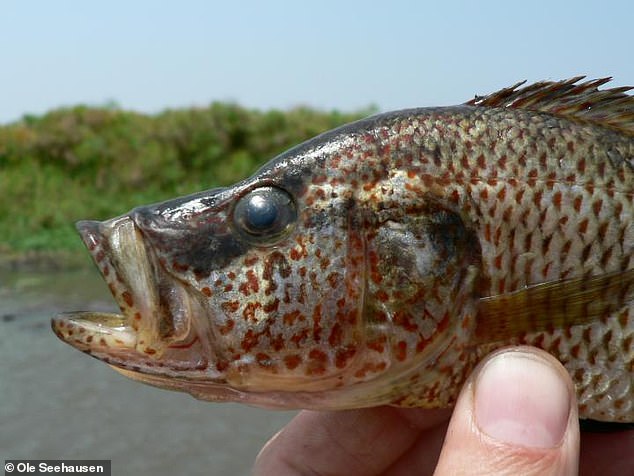 Researchers in East Africa found more than 40 species of cichlid fish (pictured above), which they believe evolved in part because females couldn’t see who they were mating with clearly in the cloudy and murky lake waters

Under normal conditions, fish prefer to breed with members of their own species, but the murky waters and low light conditions in Lake Mweru and many of the of the region’s other lakes can make it hard for females to see their male partners.

This results a higher rate of interspecies mating, which has in turn led to the rapid evolution of dozens of new species of fish.

Researchers documented more than 40 different species of cichlid fish in Lake Mweru, some of which have evolved to feed on insect larvae, others algae and zooplankton, and still others predators that feed on other fish.

‘When Lake Mweru was formed it combined cichlid lineages from the Congo and the Zambezi,’ lead researcher Joana Meier told Eureka Alert. 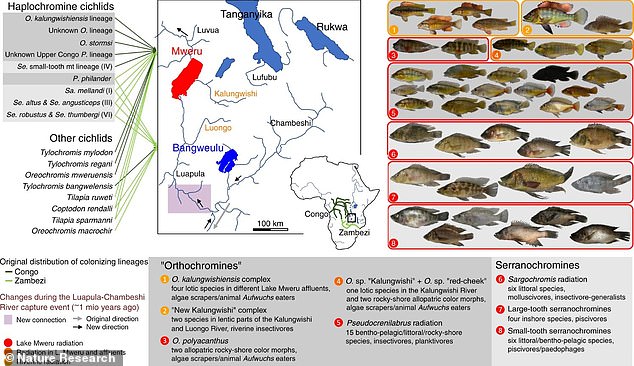 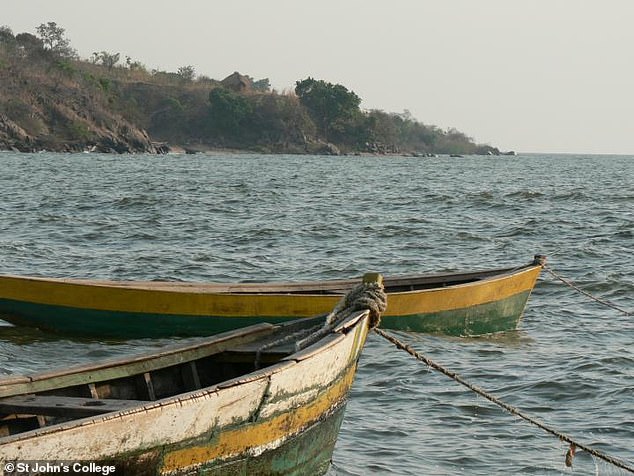 While many of the cichlid fish appear similar, there are at least 40 different species among them, including some that feed on insect larvae, others that feed on algae, and others with sharp teeth that survive as predators

‘The cichlids from these different drainage systems then mated with each other. This could have been because when the lake formed, the water was very cloudy and they couldn’t see colors properly so the females were not being as choosy about selecting a mate in their new environment.’

The findings were of particular interest because they provided evidence that runs counter to the commonly held idea that interspecies breeding, called hybridization, would eventually decrease diversity.

‘Hybridization has traditionally been viewed as something bad because if species hybridize they can, over time, merge into a single species and you lose biodiversity or lose the local species,’ Meier said.

‘The melting pot of Lake Mweru gave us a rare opportunity to study interactions between evolving new species and showed that in a new environment with lots of ecological opportunity hybridization can be a good thing that actually increases biodiversity.’

by, diffi, driven, Evolution, fish
You may also like: