Humanity must focus on fixing the climate crisis and saving the planet, rather than becoming fixated on the search for other Earths, one of this year’s Nobel laureates as claimed.

Swiss astronomer Didier Queloz, who shared the 2019 Nobel Prize for Physics for discovering planets orbiting distant suns, said the idea of humans escaping our planet to live in other solar systems was ‘farfetched and unrealistic’.

Professor Queloz was one of several Nobel laureates speaking at news conference in Stockholm, where he is to collect his share of the $910,000 prize next week.

The physics laureate dismissed the argument that climate change doesn’t matter ‘because anyway we’re going to leave the Earth at some point’. 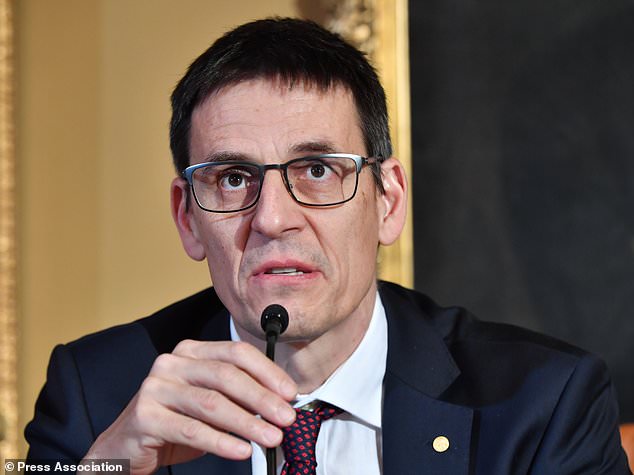 Nobel physics laureate Didier Queloz appeared to disagree with the late Stephen Hawking, who warned of the need to both fix the climate crisis and become an interplanetary species

‘I think this is just irresponsible … because the stars are so far away, I think we should not really have any hope, serious hope, to escape the Earth,’ he said.

‘Also keeping in mind that we are a species that has evolved and developed for this planet. We’re not built to survive on any other planet than this one. We’d better spend our time and energy trying to fix it.

‘So we better spend our time and energy trying to fix it than trying to imagine that we will … destroy it and leave it.’

Professor Michel Mayor, who jointly accepted the physics award with Professor Queloz for the first discovery of an exoplanet orbiting a solar-type star, added: ‘If at some point Earth becomes inhabitable there’s no way to escape. We are linked to this planet. 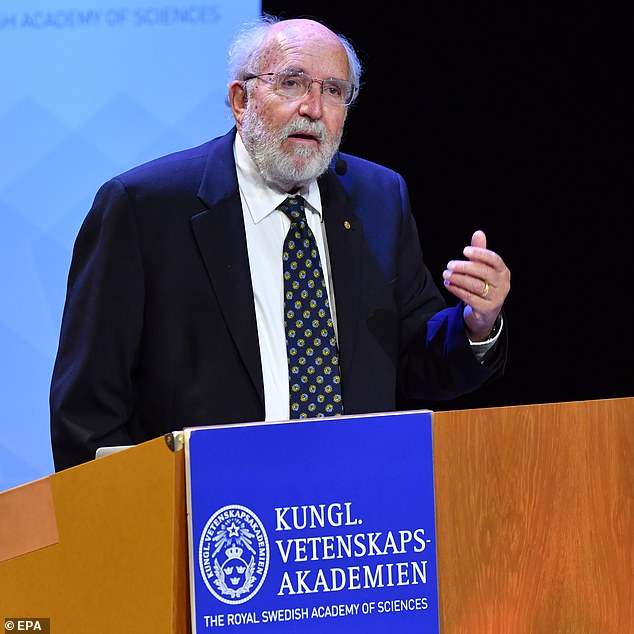 ‘We do not have a plan B. We have to take care of the Earth.’

Some scientists, including late cosmologist and theoretical physicist Stephen Hawking, have said threats such as nuclear war and climate change are so serious humans may have to eventually leave the Earth in order to survive as a species.

In his final book, Professor Hawking wrote: ‘We are running out of space and the only places to go to are other worlds.

‘I am convinced that humans need to leave Earth. If we stay, we risk being annihilated.’

Also speaking was Briton Stanley Whittingham, awarded the 2019 Nobel Prize for Chemistry along with American John Goodenough and Akira Yoshino of Japan for inventing the lithium-ion battery.

Professor Whittingham said a pragmatic approach was needed to address the climate crisis. 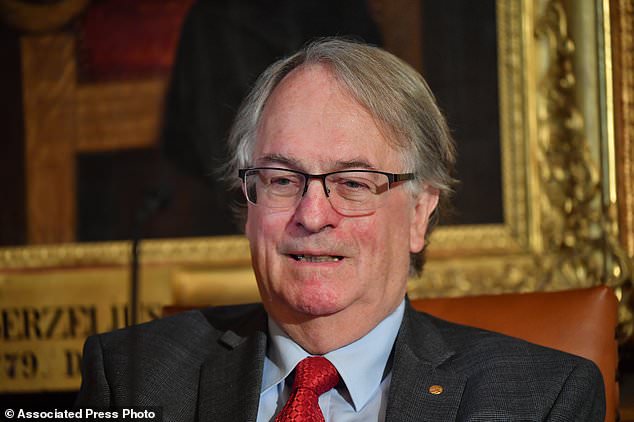 Professor Whittingham said ‘to help solve the climate issue, the time is right now, but we have to be pragmatic … We can’t just turn off all the CO2.

‘We’ve got to do things step-wise and have some solutions in mind,’ he said at the same event.

‘I think lithium batteries are going to help electrification of transportation, including big trucks, and in the U.S. it’s already helping solar and wind take over from coal power plants.’

Whittingham also told the AP that he believed the climate protests would produce results.

‘Maybe some of the young folks don’t realize how long it takes. But I go back to the Vietnam War era and the United States, where it was really the young people that pushed the politicians to get out and stop that nonsense,’ he said.

Esther Duflo, one of the Nobel economics laureates, cautioned that dealing with climate change ‘will require a change in behavior, particularly in the rich countries’ that are heavy consumers of goods and energy.

While Canadian-American James Peebles, who won half of this year’s 9-million-kronor Nobel physics prize for studying what happened soon after the Big Bang, later told The Associated Press that he is excited about the current wave of youthful climate change protesters.

‘I see these people in Princeton, my hometown, as they go marching for control of climate. It is a wonderful thing. I love their enthusiasm, their energy, their devotion to something very worthwhile,’ he said.

The prizes for achievements in science, literature and peace were created and funded in the will of Swedish dynamite inventor and businessman Alfred Nobel and have been awarded since 1901.

Chemistry: English-born chemist Stanley Whittingham, John Goodenough and Akira Yoshino for their work on the development of lithium-ion batteries.

Physics: James Peebles for theoretical discoveries in physical cosmology and Michel Mayor and Didier Queloz for the discovery of an exoplanet orbiting a solar-type star, called 51 Pegasi.

as, climate, crisis, Earth, fix, is
You may also like: