Flooding in Britain is now 11 per cent WORSE than it was just ten years ago thanks to climate change, study claims

Floods in Britain are now 11 per cent worse than they were just a decade ago thanks to the impact of climate change.

Experts used data from over 3,700 monitoring stations across Europe taken between 1960–2010 to make the first continental-scale study of changes in flooding episodes.

Flooding caused by rivers overflowing causes around $104 billion (£85 billion) in damages worldwide each year — a figure set to rise with increasing urbanisation.

Scientists had long suspected that climate change could alter the extent of flooding episodes.

However, varying regional precipitation levels and a lack of large-scale data on flooding patterns had previously made it impossible to test this hypothesis.

Northern England and southern Scotland have seen an increase in flooding of more than 11 per cent, while the study observed a 23 per cent decrease in Russia. 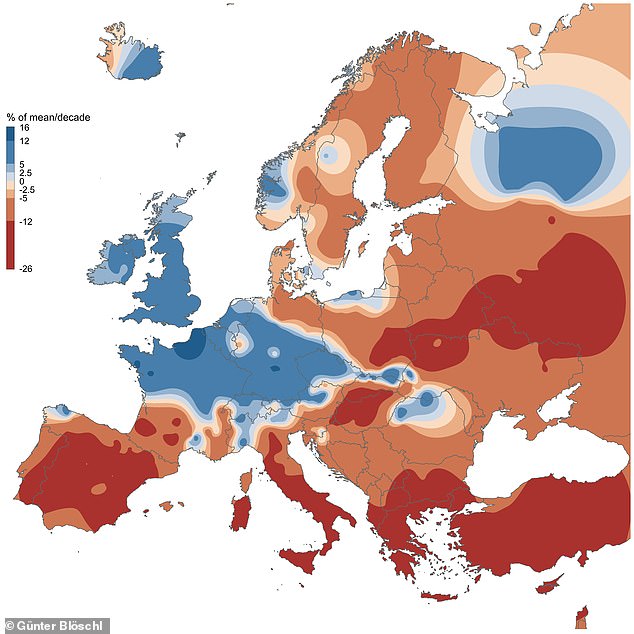 Floods in Britain are now 11 per cent worse than they were just a decade ago thanks to the impact of climate change. Pictured, the increase (blue) and decrease (red) from the mean of river flooding in Europe from 1960–2010

Flooding events have increased the most significantly in the following regions, with a more than 5 per cent growth per decade:

Smaller-scale increases have also been seen in:

The largest decreases were seen in the Ukraine, with a 10 per cent reduction in flooding events per year.

Significant decreases (of over 5 per cent) were also seen in:

Günter Blöschl of the Vienna University of Technology and colleagues analysed water discharge data recorded at 3,738 flood monitoring stations from across Europe, covering a fifty-year period from 1960 to 2010.

The team observed pronounced and varied changes in the local flood rates across Europe, which ranged from decreases of up to 23 per cent per decade compared to long-term averages to increases of up to 11 per cent each decade.

Moreover, the patterns in the changing nature of European flood episodes matched what is expected to result from the effects of our changing climate.

‘Two years ago, we were able to show that temporal patterns are changing,’ said paper author and hydrologist Bruno Merz, of the GFZ German Research Centre for Geosciences.

‘Now, together with international colleagues, we have demonstrated that the severity of events is also influenced by climate change.’

‘It has long been suspected that climate change has an impact on the extent of flooding, as a warmer atmosphere can store more water,’ added Professor Blöschl.

‘But that is not the only effect, flood changes are more complicated.’

The researchers found that flooding is increasing in central and north-west Europe, in the region between Iceland and the Alps, as a result in rising levels of precipitation and increases in soil humidity. 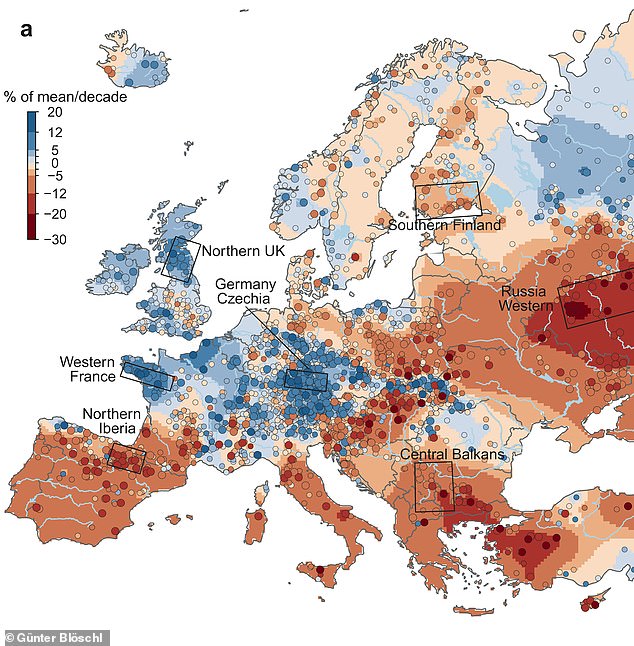 Flooding caused by rivers overflowing causes around $104 billion (£85 billion) in damages worldwide each year. Pictured, local and regional changes (with increases in blue and decreased in red) in river flood discharges from 1960–2010 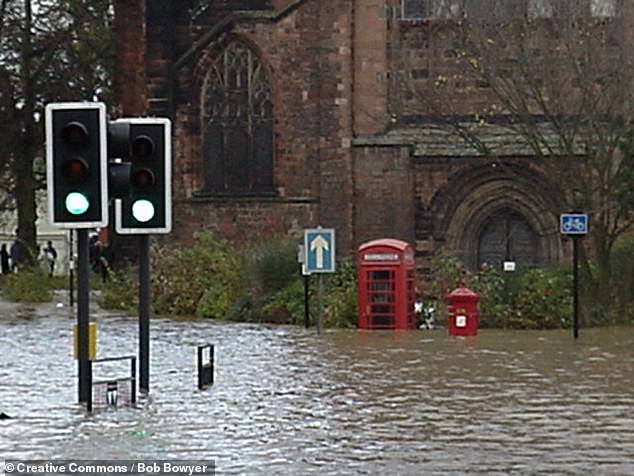 Floods outside Shrewsbury Abbey, in Shropshire, England, in 2000. Here, the waters are pictured at their highest level

In contrast, the researchers found that flood levels were largely falling in southern Europe, where climate change is bringing about both less frequent bouts of precipitation and higher temperatures that evaporate more moisture from the soil.

Small rivers in this area may in fact be more growing susceptible to flooding, however, the researchers noted.

This is thanks both to more frequent thunderstorms and changes in land management — such as deforestation — which can increase the likelihood of flooding.

Finally, the researchers note that flood levels are also falling in the more continental climates of Eastern Europe, however they attribute this trend to the decreasing amounts of snow that falls each winter. 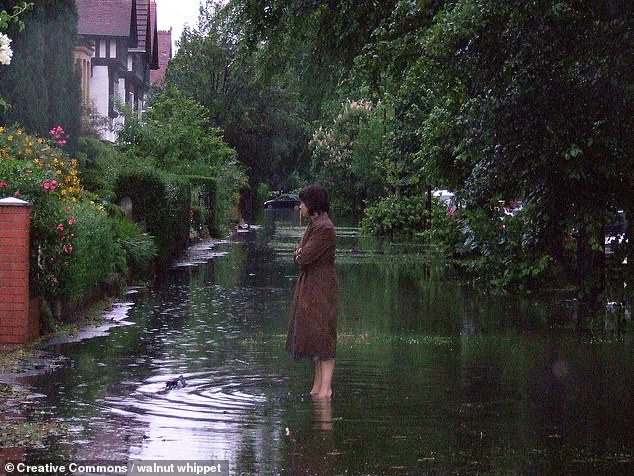 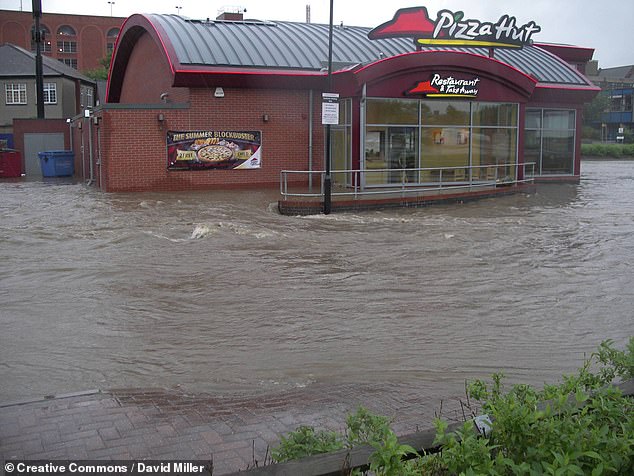 Flooding outside a restaurant in Chesterfield, England, in the June of 2007

Fort the researchers, these findings highlight the importance of considering the future impacts of climate change when developing flood management strategies.

‘Regardless of the necessary efforts of climate change mitigation, we will see the effects of these changes in the next decades,’ concluded Professor Blöschl.

‘Flood management must adapt to these new realities.’

WHAT SHOULD THE EU BE DOING TO PROTECT PEOPLE FROM CLIMATE CHANGE?

In 2013, the European Academies’ Science Advisory Council (EASAC) published a report which looked at the frequency of extreme weather events.

Since then, there has been a continued rise in how common these events occur.

In order to cope when such adverse weather conditions strike, they made recommendations as to how the EU can better protect its citizens from climate change.

The report claimed that in order to best deal with the issues, it is necessary to understand them first.

To understand how global warming will affect the extremes of weather, it is necessary to study and model them.

Across the European continent, heatwaves can vary massively and have vastly different impacts.

Understanding the nuances of these phenomena is key to weathering the storm.

The report stated that the agriculture sector as a whole needed to improve.

Vulnerability to extreme weather and possible measures to increase resilience should be produced.

5. Strengthen the knowledge of climate change

The research found that it was crucial that we viewed climate change adaptation as a continuous process.

In order to do this sustained observations, analysis and climate modelling about the Earth are integral parts of a robust and flexible climate-change adaptation strategy.

Before adaptation can be achieved, there are several barriers which include  those that are physical, technical, psychological, financial, institutional and knowledge-based.

NHS advice on coronavirus including public transport, festivals and concerts

Old bread is being used to create yoghurt, wine and new bread