Jon Martin, a professor from Northland College in Wisconsin, US, was stunned after he spotted a flying squirrel while probing for lichen, before shining a light at it and seeing a flash of pink.

He decided to use museum specimens of 135 other squirrels to see if they had the same glow. 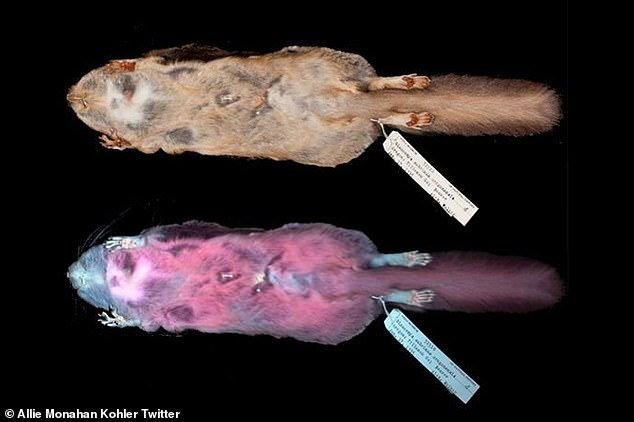 His results were recently published online in the Journal of Mammalogy and revealed that only members of the Glaucomysgenus, New World flying squirrels, glimmered pink.

Professor Martin told Newsweek: ‘One evening, I hear the unmistakable chirp of a flying squirrel at our bird feeder.

‘I point the light at it and bam! Pink fluorescence.’

He asked for undergraduate student Allie Kohler to help him and they formed a team to investigate the flash of colour.

Miss Kohler, now a graduate student at Texas A&M University, described the discovery as ‘seemingly unnatural in the natural world.’

Out of the 135 museum squirrel specimens studied, only the North American squirrels, which can be found in forests from Honduras to Alaska, shimmer pink.

However, the researchers warned that they do not know what effect ultraviolet light has on the squirrels, advising people not to shine light on any wild ones they encounter. 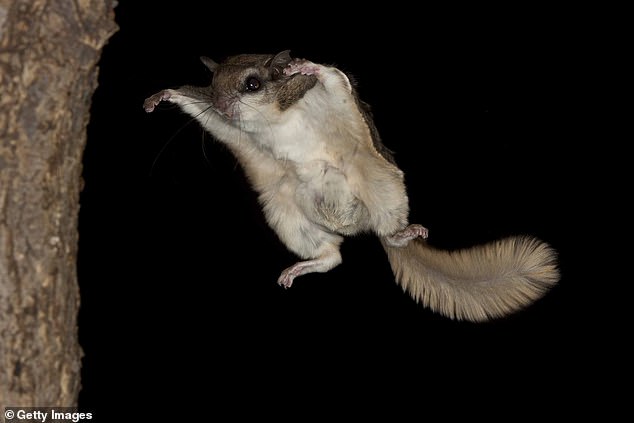 It is unknown why the squirrels’ fur turns pink, though the team theorises it might help the creatures see each other when the light it low. Among other squirrels tested were the eastern grey squirrel, the fox squirrel and the American red squirrel. None glowed (stock)

Among other squirrels tested were the eastern grey squirrel, the fox squirrel and the American red squirrel. None glowed.

It is unknown why the squirrels’ fur turns pink, though the team theorises it might help the creatures see each other when the light it low.

They also suggest it might be a way of avoiding predators, though Miss Kohler admits: ‘This trait could just be a cool colour they happen to produce.’

‘I think these kind of discoveries just cause us to pause in wonder at the world around us.

‘There is so much that is waiting to be discovered in this world, hiding right in front of us in plain sight.’