Fortnite’s feverishly anticipated Playground mode has been pulled from the game less than two hours after it launched online.

Players reported problems with the new mode within minutes of its launch, forcing Fortnite to investigate.

The new mode, which is designed to enable Fortnite players to practice their skills in the battle royale-style survival shooter, has yet to re-launch. 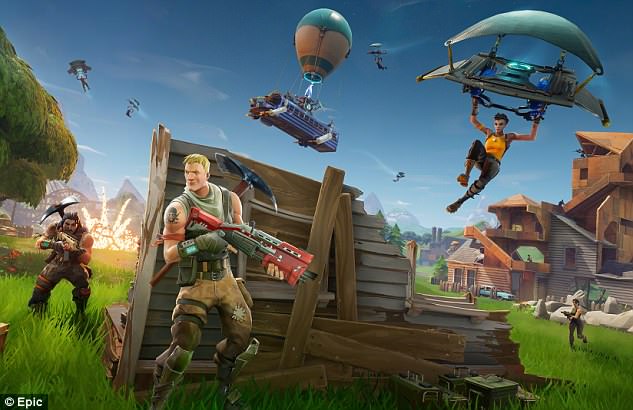 Fortnite (pictured) is one of the most popular online video games available, but the much anticipated Playground mode has been pulled offline less than two hours after launch

Playground mode was rolled-out worldwide alongside a slew of other updates, including new skins and emotes, as part of routine downtime to launch v4.5.

On its official status page, Epic Games confirmed: ‘We are taking the Playground LTM offline while we investigate issues with matchmaking.’

Many believe the issues with the new mode were triggered by the bout of new players that immediately rushed to test the feature as soon as it launched.

In a statement shared on social news site Reddit, the company announced it had ‘multiple teams’ working to fix the problem.

It said: ‘We know you want to get back out to the Playground LTM.

‘We’ve got multiple teams working to get this mode back into your hands so you can let your imaginations run wild.

‘We want to inform you that the Playground LTM will remain closed for repairs for the night. We’ll have more information available tomorrow.’ 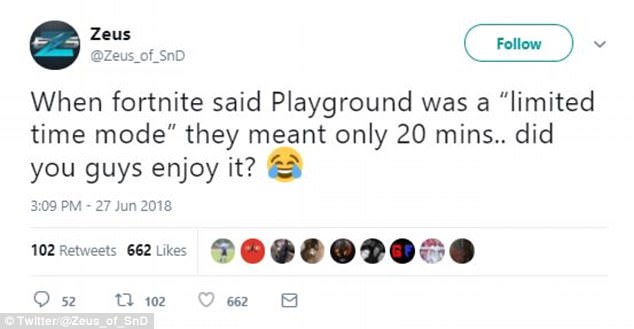 Playground has been billed as a low-risk version of the survival shooter designed to allow players to gain a sense of familiarity with the characters, map and weapons.

The new mode allows players to target practise, build forts, and enjoy the game without the worry of veteran players killing them quickly.

Fortnite, which has more than 125 million players worldwide, is a free-for-all shooter.

Each match starts with 100 players, and ends when only one player is left standing.

In the Battle Royale-style shooter – once a player dies, their game is over.

‘The Playground LTM will load you into the Battle Royale Map with some adjusted settings,’ developer Epic Games explained during the announcement of Playground.

‘Battle and build to your heart’s content with an extended period of time to roam around the map as well as increased resource generation.

‘All treasure chests and ammo crates will be spawned, try droppin’ in different spots and scope out the loot. Friendly fire is on so you can scrimmage with your squad (up to 4 friends per match), but fear not you’ll respawn immediately.

‘Stats and Challenges will not be tracked in this mode. This represents our initial step into what a creative mode looks like in Fortnite.

‘Practice, strategise and enjoy yourself. We can’t wait to see what you do!’ Minutes after the new mode going live, Fortnite was forced to investigate long queue times and error messages in the game. Fortnite launched the mode during scheduled downtime for patch notes v4.5, when it also rolled-out new skins and emotes to players worldwide

It allows players to practise, build and enjoy the game without the fear of superior players killing them quickly. Fortnite says it represents the initial step into what a creative mode looks like in the game

As players can only die once during each match, Fortnite can have a frustratingly steep learning curve for new players.

Playground is designed to allow people to experiment with game mechanics, explore the world map, and find out how the game works without fear they will be booted from the match the first time they lose a gunfight.

The consequence-free mode has been a frequently requested feature for Fortnite and its main competitor PUBG.

With PUBG in particular, fans have been clamouring for a place to test guns, as each in-game weapon is designed to handle very differently.

In Fortnite, players will be able to use the mode to improve their ability to create buildings and forts – a key component in the game, and one of the main differentiators from PUBG.

Fortnite is now available as a free download on a slew of devices, including Sony PS4, Windows PC, Xbox One, iOS and Nintendo Switch.

It is also set to launch on Android later this summer.

The game is free to download, with additional content available via in-app purchases, including new skins, dance moves and accessories for in-game avatars.

There have been multiple reports of young players wracking up expensive bills in the game, with disgruntled parents covering the cost.

One distraught father from Stoke-On-Trent was lumbered with a £691 ($918) receipt for the frivolous spending of his 12-year-old son.

Since its launch on iOS in mid-March, the game quickly climbed the ranks of the top 10 free iOS apps following its launch on the platform, beating the likes of Snapchat, Facebook and WhatsApp.

A staggering £72 million ($100 million) was spent by gamers in the first 90 days since its launched on the Apple App Store. 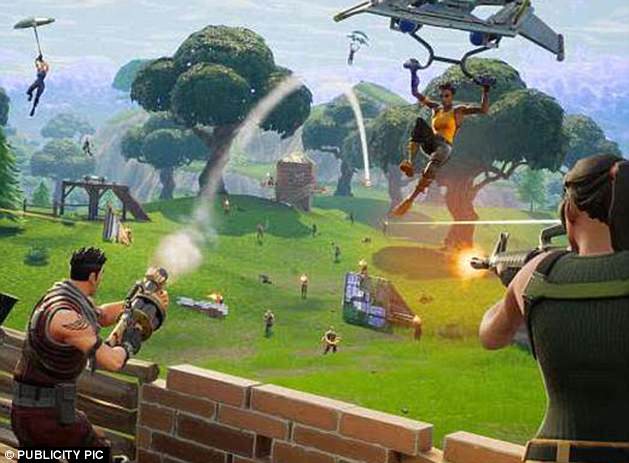 Free to play, users can spend real-world money on upgrades for their avatar in the game. These include skins, dance moves and accessories. According to analysis from market analyst Sensor Tower , the game made more than $25 million (£19 million) during its first month on iOS

WHY HAS THE WHO CLASSIFIED INTERNET GAMING AS A MENTAL HEALTH DISORDER?

The World Health Organisation has classified playing video games on the internet as an official mental health disorder.

‘Gaming disorder’ is defined as ‘a pattern of gaming behavior characterized by impaired control over gaming, increasing priority given to gaming over other activities to the extent that gaming takes precedence over other interests and daily activities, and continuation or escalation of gaming despite the occurrence of negative consequences.’

To be diagnosed with gaming disorder, the individual must:

(2) Have experienced this impairment for at least 12 months

WHO advises gamers to be mindful of how much time they spend playing, especially if it is to the exclusion of other daily activities.

They should also be alert to changes in their physical or psychological health and social functioning which could be attributed to gaming.

According to analysis from industry specialist Sensor Tower, the game made more than £19 million ($25 million) during its first month in the Apple App Store, and surpassed £38 million ($50 million) by its 45th day.

Earlier this month, the World Health Organisation announced ‘gaming addiction’ will be added to the organisation’s International Classification of Diseases, a compendium of medical conditions.

Governments around the world are expected to provide treatment for ‘gaming disorder’ and incorporate it into their healthcare systems – including the NHS.

As well as gaming addiction now being treated on the NHS, teachers have raised concerns that the game is affecting the concentration of children.