Foundation for modern Europe was laid by mysterious Longobards

Foundation for modern Europe was laid in the DARK AGES: Ancient DNA reveals ravaging barbarians tribes spread across the continent during the fall of the Roman Empire

The foundations for modern Europe was laid during the Dark Ages, according to new research.

Scientists have shed fresh light on this mysterious period – and the fall of the Roman Empire – by extracting DNA from dozens of skeletons at two ancient cemeteries.

The graves contained members of one of the most powerful and ravaging barbarian tribes that migrated across the continent, called the Longobards.

The men were buried with beautiful swords, shields and spear heads they would have used in battle, and the women with beaded necklaces and broaches.

Researchers said the Longobards were an important group during a key era known as the Migration Period, which began during the decline of the Roman Empire around the 4th century AD.

The period saw the widespread migrations of peoples within or into Europe – largely in spaces left by the Romans – and helped form the foundation for the continent as we know it today, they added. 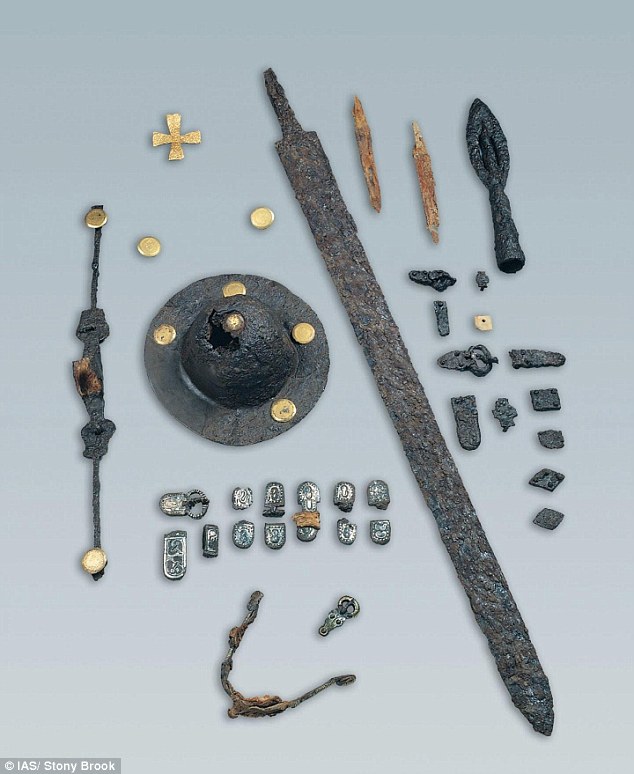 Scientists extracted DNA from dozens of skeletons at two ancient cemeteries in Austria and Italy (left). The graves contained members and burial items (pictured) of one of the most powerful barbarian tribes that migrated across the continent, called the Longobards

An international team mapped the complete genomes of 63 individuals dug up in Szolad, Hungary, and Collegno, Italy.

It provides the clearest picture yet of the lives and movements of the people, also known as the Lombards, that ruled most of Italy for more than two centuries.

Study lead author Dr Krishna Veeramah said: ‘Our current results are consistent with the idea of barbarians migrating from north of Danube and east of the Rhine, which would suggest we are observing invasions previously described by the Romans.

‘It is also likely that social organisation was based around large high-status male biological kinship groups, and these were key to establishing communities following the migration into Italy.’

The study said this was the ‘Migration Period’ that ‘laid the foundation for modern European society.’

The Longobards invaded from modern day Hungary, at the time the Roman Province of Pannonia in 568 AD.

This was around the time the legend of King Arthur was born.

The Dark Ages lasted from at the end of the 5th century – when Rome’s 400-year rule over the ancient world was ended – to the Norman Conquest in the second half of the 11th century.

The ‘dark’ refers to the very little was written about those centuries or if it was, it has not survived.

Data from the new study almost doubles the number of ancient genomes ever obtained from a single ancient site.

It enabled the international team to examine the relationship between the genetic background of the community and the archaeological material left behind. 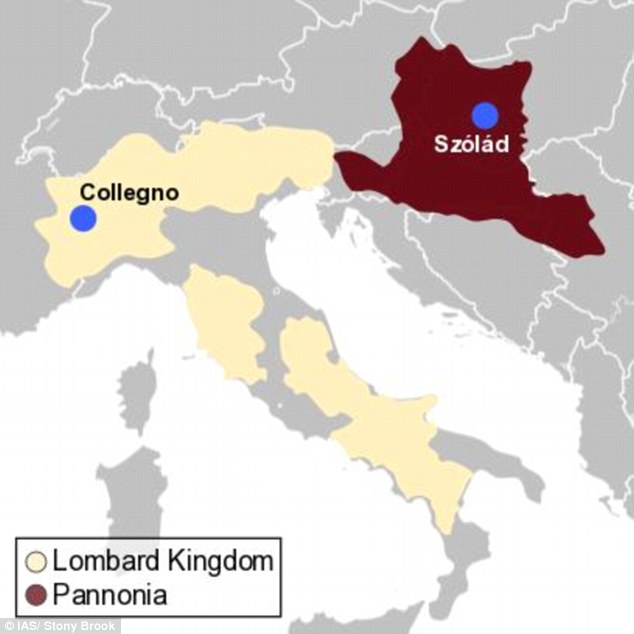 An international team mapped the complete genomes of 63 individuals dug up in Szolad, Hungary, and Collegno, Italy

Senior author Professor Patrick Geary, of the Institute for Advanced Study, Princeton, New Jersey, said: ‘Prior to this, we would not have expected to observe such a strong relationship between genetic background and material culture.

‘This appears to suggest these particular communities contained a mix of individuals with different genetic backgrounds, that they were aware of these differences, and that it likely influenced their social identity.’

At Szolad, the cemetery appears to be organised around one high-status, predominantly male family of three generations.

Collegno likely reflects a community that settled for multiple generations.

WHO WERE THE LONGOBARDS?

Massive upheaval changed the landscape of Europe over from the 3rd to the 10th centuries AD.

As the Roman empire collapsed, barbarian groups filled the power vacuum left behind by the retreat of imperial forces.

Longobards ruled most of Italy for more than 200 years after invading from the former Roman Province of Pannonia – modern-day Hungary – in 568AD.

Here, they developed their own specific culture, ruling over vast territories in the 6th to 8th centuries.

Becoming known as the Lombards, their synthesis of architectural styles marked the transition from Antiquity to the European Middle Ages.

They drew on the heritage of Ancient Rome, Christian spirituality, Byzantine influence and Germanic northern Europe.

Interestingly, in both cemeteries, individuals buried with the elaborate grave goods tended to have a genetic ancestry associated with modern northern and central Europeans.

They also tended to have more protein rich diets.

Meanwhile, those with more southern European, were much less likely to be laid to rest with nice possessions.

Professor Geary said: ‘What we have presented is a unique cross-discipline framework for the future, uniting experts from different disciplines to reinterpret and reconcile historical, genomic, isotopic and archaeological evidence to enhance our knowledge of the past.

‘That lets us compile new information on how populations move, how culture is transmitted, how to better understand identity, and new ways of understanding the complexity, heterogeneity, and malleability of Europe’s population in the past and the present.’ 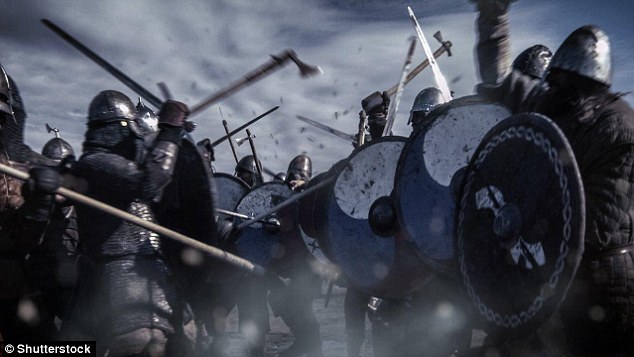 The Longobards invaded from modern day Hungary, at the time the Roman Province of Pannonia in 568 AD. They were one of many barbarian tribes (artist’s impression) to migrate across Europe following the fall of the Roman Empire

The researchers also reconstructed comprehensive genealogies of the people who were buried in these cemeteries for the first time – and found family relations spanning multiple generations were likely key to establishing these communities.

Corresponding author Dr Veeramah, of Stony Brook University, New York, said: ‘It looks like both these cemeteries organised themselves around one or two large groups of biologically related kin, with the vast majority of these individuals being men.

The team concluded it was unusual to see this genetic ancestry type in Hungary – and certainly in Italy – in the 6th century.

The Lombards reached their peak of expansionist power when they ruled over a kingdom consisting of most of present-day Italy from the late 6th century to the late 8th century.

Their origin can be traced back to a certain area in the south of the Scandinavian region.

They began migrating in search of new lands.

They were followed by numerous other tribes, including the Thuringians, Bulgars, Saxons, Ostrogoths, Gepids, or Heruls. 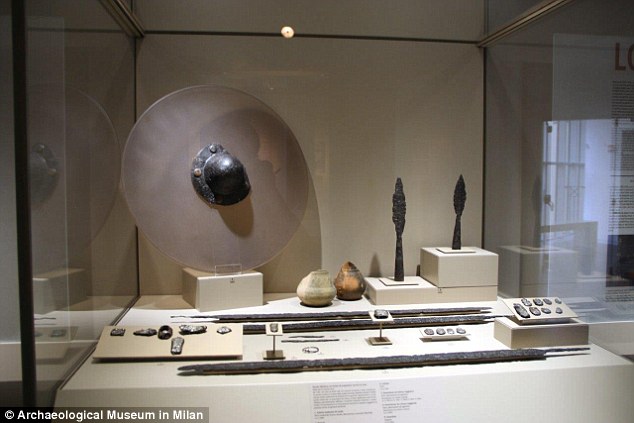 File photo of Lombard grave goods dating from the 6th-7th centuries. The men analysed in the new study were buried with beautiful swords, shields and spear heads they would have used in battle, and the women with beaded necklaces and broaches

Once there, they found the once dominating Rome depleted and underpopulated, primarily as of the cause of the war between the Goths, who ruled these lands prior to the arrival of the Lombards, and the Byzantines.

After seizing power over the local populace, the Lombards established a kingdom of their own in the north and centre of the peninsula.

Subsequently, they were conquered by the Frankish Empire of Charlemagne.

But other Lombard noblemen continued to rule over some southern Italian provinces before being, in turn, conquered by the Normans in the 11th century.

Their legacy lingers own to this day primarily when it comes to the name of Lombardy, one of the northernmost regions of Italy.

Western Europe underwent a major socio-cultural and economic transformation from the third to tenth centuries, which included the collapse of the Roman Empire and the migration of barbarian groups throughout Europe.

Professor Geary said: ‘It could be that we look at some new cemeteries 50 km away or that are 100 years older or younger and find very different patterns of social organisation.

‘People are complicated now, and they almost certainly were during the Migration Period.

‘There are thousands of medieval cemeteries out there for us to look at. This is hopefully just the beginning of our work.’