Four-inch long parasitic wasps are discovered in the Ugandan jungle

Scientists have discovered two species of wasps which grow up to four inches (10cm) long and lay their eggs inside other insects.

The wasps were found in the jungle in Uganda’s Kibale National Park and are among some of the only ones of their type ever discovered.

Named Epirhyssa quagga and Epirhyssa johanna, the creatures are part of the rhyssine family, which cannot sting and are harmless to humans.

But they are less harmless in their own habitat – their larvae develop inside the offspring of beetles and other wasps and eat them from the inside out.

Discoveries of these disconcertingly large wasps are generally rare, but scientists this time found large numbers of both males and females of new types in the forest. 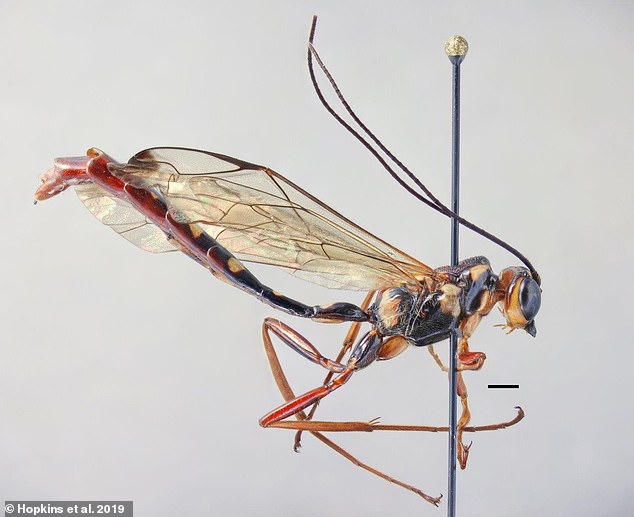 One of the new species (pictured) was named Epirhyssa quagga, after a zebra – scientific name Equus quagga – because of its black and pale stripes 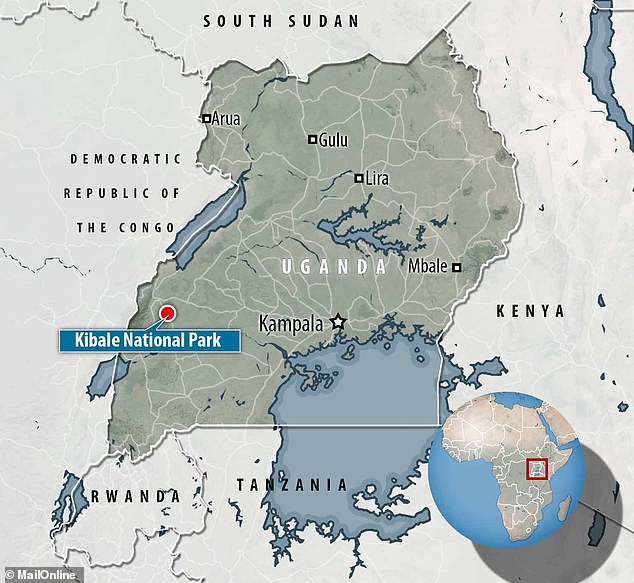 The wasps were discovered in the Kibale National Park in Uganda. Different types of the parasitoid wasps have in the past been found in the neighbouring Congo and Cameroon

Researchers from the University of Turku, in Finland, made their discoveries by catching the creatures in tent-like traps.

High definition pictures of the insects show they are orange or black in colour and the females have ‘extremely’ long ovipositors.

Ovipositors are pipes coming out of the rear end of the creature which are used to drill through wood, stab and paralyse other creatures, and lay eggs.

The Epirhyssa wasps use them to inject their eggs into the larvae of beetles or other wasps which live inside rotting wood.

Not much is known about wasps of the rhyssine family, and the largest species have only been spotted twice before, the team said, in 1930 and in 1980.

But this time they have managed to find an entire community, among them the two new species which had never been seen before. 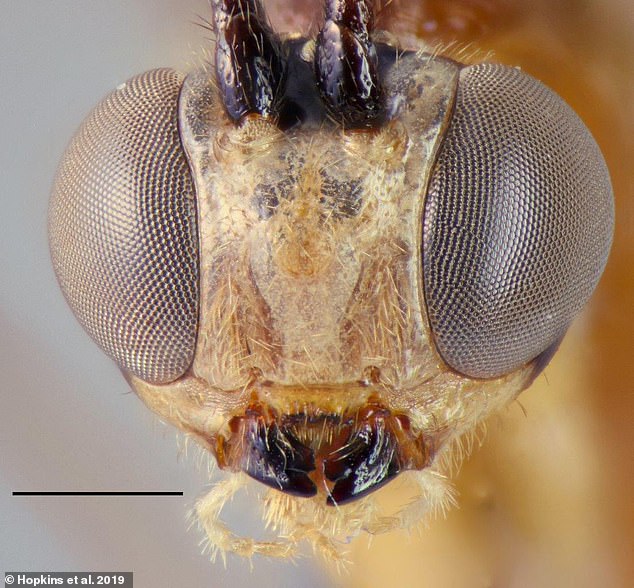 The insects can grow up to four inches (10cm) long but do not have stings so cannot hurt humans. Their offspring, however, are parasitoids and eat their insect hosts from the inside out 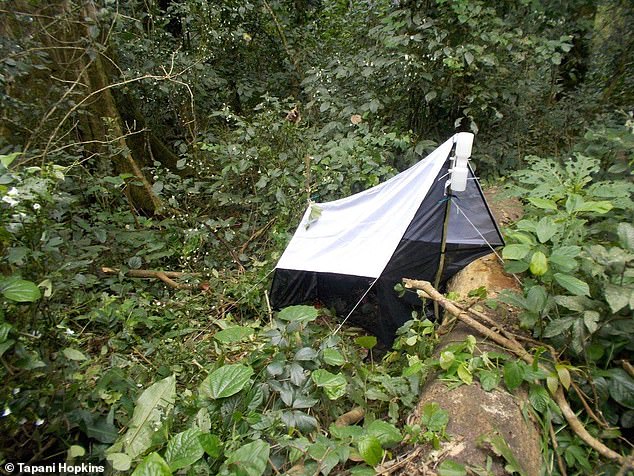 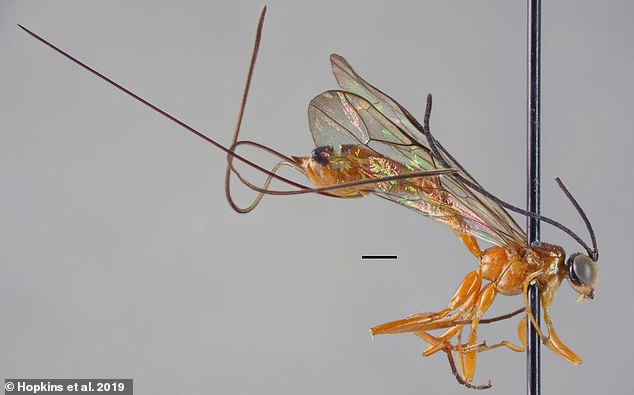 The second new species discovered, the Epirhyssa johanna, was named after the wife of one of the scientists – Johanna

PhD student Tapani Hopkins, who found the insects, said: ‘A good example of how poorly tropical rhyssines are known is the species Epirhyssa overlaeti, which is the largest African rhyssine.

‘Only two females were known before, one collected in the 1930s in the Congo and the other one in Cameroon in the 1980s.

‘Now, at one single Ugandan site, we found large numbers of both females and males. This completely changed what is known of the distribution of the species.’

The wasps, which are known as parasitoid wasps, breed by laying their eggs inside other insect larvae.

While inside these larvae, the wasp infants eat their internal organs – the host will have been paralysed or poisoned by the mother wasp – until the host dies and the wasp larva emerges and becomes a pupa.

It then develops inside this cocoon before emerging as a fully fledged wasp reading to repeat the process.

Researchers from University of Turku, in Finland, discovered the species and named them themselves

Mr Hopkins, who published his research in the journal ZooKeys, took full advantage of his naming privilege after discovering the insects.

He added: ‘We named one of the new species Epirhyssa quagga, because its colouration resembles that of a zebra. [Zebras’ scientific name is Equus quagga]

‘The other species became Epirhyssa johanna. The name Johanna refers to my wife.’

WHAT IS A PARASITOID?

Parasitoids are insects with parasitic larvae that eat their host – usually another insect – from the inside out.

They often employ a sharp tool known as an ovipositor to deposit eggs under the skin or exoskeleton of unsuspecting hosts.

After a short gestational period, the larvae hatch and begin consuming their host, normally reaching adulthood when the host has died.

Parasitoid species are mostly types of bee, wasp and ant, though some species of fly also employ the gruesome technique.

The biology of parasitoids has inspired several science fiction authors and scriptwriters to create parasitoidal aliens that kill human hosts, including the infamous Xenomorph in Ridley Scott’s 1979 film ‘Alien’.

Parasitoids are insects with parasitic larvae that eat their host – usually another inset – from the inside out. Pictured is a parasitic wasp that injects larvae into spiders and then sews the host into its nest to pin it down