Four skeletons — two from 8,000 years ago and two from 3,000 years ago —unearthed under a rock shelter in Cameroon have shed light on how humans spread throughout Africa.

A pair of skeletons, one a teenager and the other his four-year-old male relative, possibly a first cousin once removed, were dated to 8,000-years-old.

Two other young males lived 3,000 years ago and were also related. Possibly second-degree relatives such as half-siblings or an uncle and nephew.

DNA has survived in a remarkable state of preservation in all of the skeletons and analysis reveals that, despite living five millennia apart, they are genetically similar.

However, their DNA was extremely different to the Bantu-speaking people that live in the region today and who are believed to have originated in this part of West Africa.

The DNA is some of the oldest ever found in western Africa and scientists say it paints a complex image of early human ancestry, but also reveals strong evidence for the existence of a mysterious group known as ‘Ghost Modern’ people. 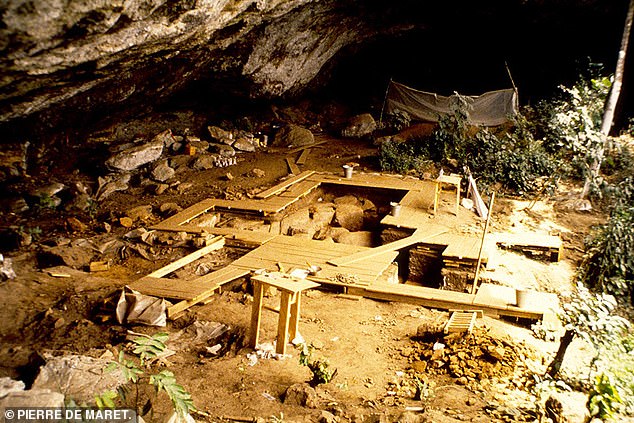 Four skeletons — two from 8,000 years ago and two from 3,000 years ago —unearthed underneath a rock shelter in Cameroon (pictured) have added to the mystery of how humans spread throughout Africa

WHAT IS SHUM LUKA?

Shum Laka is a rock shelter located in the Cameroon.

It was long pinpointed by linguists as the probable cradle of Bantu languages, a widespread and diverse group of languages spoken by more than a third of Africans today.

The Shum Laka rockshelter was excavated in the 1980s and 1990s by archaeologists from Belgium and Cameroon.

Its archaeological record spans the past 30,000 years.

Shum Laka is emblematic of the ‘Stone to Metal Age,’ a critical era in west-central African history that ultimately gave rise to Iron Age metallurgy and farming.

During this era, the site repeatedly served as a burial ground for families, with 18 individuals (mainly children) buried in two major phases at about 8,000 and 3,000 years ago.

The rock shelter in Cameroon is a famed archaeological site called Shum Laka, which researchers say is emblematic of the ‘Stone to Metal Age’.

Since its initial excavation in the 1980s it has yielded vast amounts of data on early human history.

It was inhabited at a time when west-central Africans began farming and metallurgy.

The site was repeatedly used as a burial ground for families, with 18 individuals (mainly children) buried in two major phases at about 8,000 and 3,000 years ago.

‘Such burials are unique for West and Central Africa because human skeletons are exceedingly rare here prior to the Iron Age,’ said Dr Isabelle Ribot, a University of Montreal anthropologist.

‘Tropical environments and acidic soils are not kind to bone preservation, so the results from our study are really remarkable.’

The findings of the landmark study are published in the journal Nature and reveal unexpected origins of the Bantu language.

Western Africa and areas of Cameroon specifically have long been identified as the birthplace of Bantu languages which are used by more than 30 per cent of Africans today.

But the DNA extracted from the petrous, a super dense bone that encases the inner ear, of the four skeletons throws the origins into disarray.

It was assumed the region’s native people developed the language, or it was brought to the region and then spread throughout the continent.

‘The consensus is that the Bantu language group originated in west-central Africa, before spreading across the southern half of the continent after about 4,000 years ago,’ said Dr Mary Prendergast, a professor of anthropology and chair of humanities at Saint Louis University’s campus in Madrid.

But the modern-day Bantu-speaking people are of no relation to the millennia-old indigenous people.

‘This result suggests that Bantu-speakers living in Cameroon and across Africa today do not descend from the population to which the Shum Laka children belonged,’ said Dr Mark Lipson from Harvard Medical School, the lead author of the study.

‘This underscores the ancient genetic diversity in this region and points to a previously unknown population that contributed only small proportions of DNA to present-day African groups.’

The findings were expected to reveal a concrete origin of the Bantu languages, but instead added to the mystery.

But the DNA analysis has been used to help paint a picture for what may have happened to the very first Homo sapiens on Earth around 260,000 years ago. 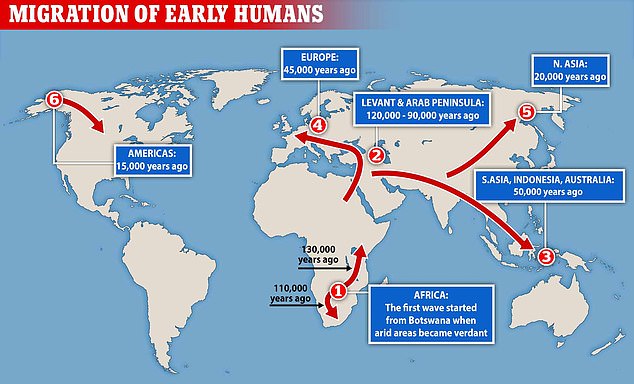 A map showing the relative dates at which humans arrived in the different Continents, including Europe 45,000 years ago. All humanity began in Africa, and moved beyond it after dispersing throughout the continent over thousands of years 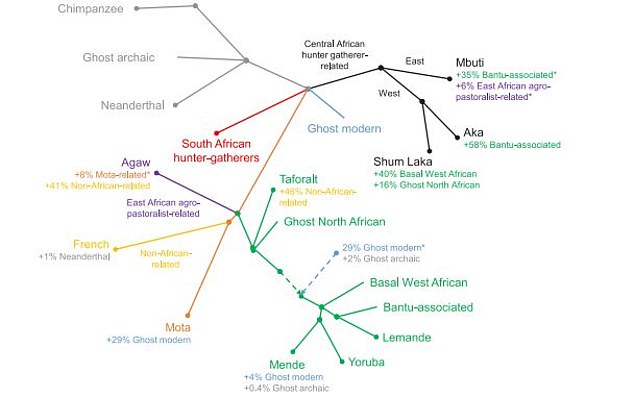 Pictured, one potential option for how different populations of people spread throughout Africa. Shum Laka people are shown as a distant relative to the Bantu-speaking people as revealed by the latest study 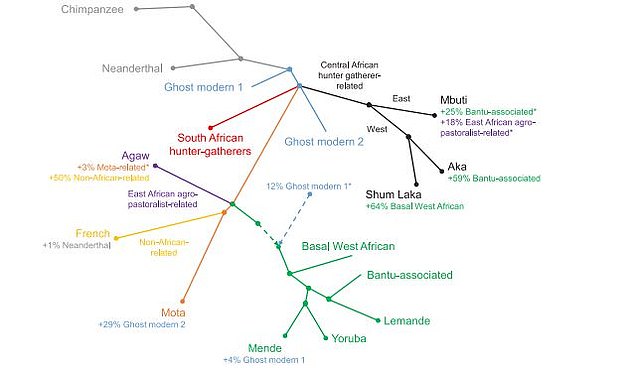 Pictured, another potential version of how early groups of humans and hunter-gatherers diverged across Africa over thousands of years. The hypothesised ‘Ghost Modern’ people are shown as a genetic dead-end and Shum Laka people remain distinct to Bantu-speaking people

The researchers examined the DNA of the Shum Laka children to DNA from a 4,500-year-old skeleton from Ethiopia, three ancient southern Africans roughly 2,000 years old, two French individuals, a chimpanzee and a Neanderthal.

A computer model was used to predict how ancient populations in Africa diverged to form the groups seen in the fossil record and alive today.

Africa’s incredible diversity is due to the fact Homo sapiens are believed to have originated there.

The model claims Homo sapiens slowly out-competed other hominids and then four main lineages emerged at the same time and propagated over several generations.

Three of them are known to science and became hunter-gatherers in Central, Southern and Eastern Africa.

But the fourth group, which can be inferred from the fractious DNA record, remains elusive to science and is known simply as the ‘Ghost Modern’.

‘This quadruple radiation-including the position of a deeply-splitting ‘ghost’ modern human lineage-had not been identified before from DNA,’ Dr Reich said.

Theories about the mysterious ‘Ghost Modern’ people include them being hunter-gatherers that lived south of the Sahara, but no proof has been found.

A group of East Africans eventually expanded their range westward and  mixed with with Central African hunter-gatherers.

This then eventually spawned the first West Africans of which the Shum Laka may be the descendants of this group.

But evidence from this study reveals these native West Africans, at some point, were muscled out of their territory as modern inhabitants are barely related to them.

It is thought that a completely separate group of Western Africans gave rise to the Bantu people who became a powerhouse culture.

They dominated large swathes of land with agriculture and over the course of millennia squeezed out many of the hunter-gatherer populations.

As the Bantu people thrived, hunter-gatherers were marginalised, and this may have been the fate that met the doomed Shun Laka people, researchers claim.

It may also explain what happened to the ‘Ghost Modern’ people.

This will remain just a theory until remains of the hypothesised Ghost Modern people are found.

boys, Camer, Four, in, prehistoric
You may also like: