A freak summer hailstorm struck the Mexican city of Guadalajara early Sunday, burying cars and blanketing streets in a thick layer of ice.

Local newspaper El Informador reported that more than 1 meter (3.28 feet) of ice covered parts of the city. In addition to burying cars, the storm damaged 457 homes in Guadalajara and the district of Tlaquepaque. 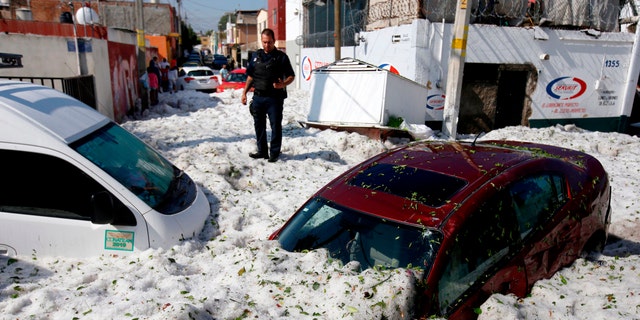 A policeman stands next to vehicles buried in hail in the eastern area of Guadalajara, Jalisco state, Mexico, on June 30, 2019.
(ULISES RUIZ/AFP/Getty Images)

In a tweet, which has been translated from Spanish, Enrique Alfaro Ramirez, governor of the state of Jalisco, explained that he had never seen anything like the hail storm before, noting that a hail layer of “tens of centimeters” blanketed parts of the city.

In a video, Alfaro suggested that the freak hailstorm was caused by climate change. "This is a natural phenomenon that we had not seen before," he added. In subsequent tweets, Alfaro showed the city’s cleanup operation.

freak, hailstorm, hits, Me, Summer
You may also like: