Make a wish on Friday the 13th! NASA teases stargazers with a stunning image of the Geminid meteor shower ahead of its peak this weekend

Friday the 13th will see a stunning display of shooting stars light up the night sky around the world as the Geminid meteor show makes its annual appearance this weekend.

NASA teased stargazers around the world with a stunning photo from the 2013 spectacle, complete with Jupiter and the Orion Nebula in shot.

This year’s event lasts between December 4 – 17 and will hit its peak on the night of Friday 13 and the morning of Saturday 14.

Bright white meteors are expected to be especially visible around 2am, when the Gemini constellation they appear to originate from is highest in the sky.

But the annual celestial event will have to contend with a bright waxing gibbous moon in the sky, astronomers warn. 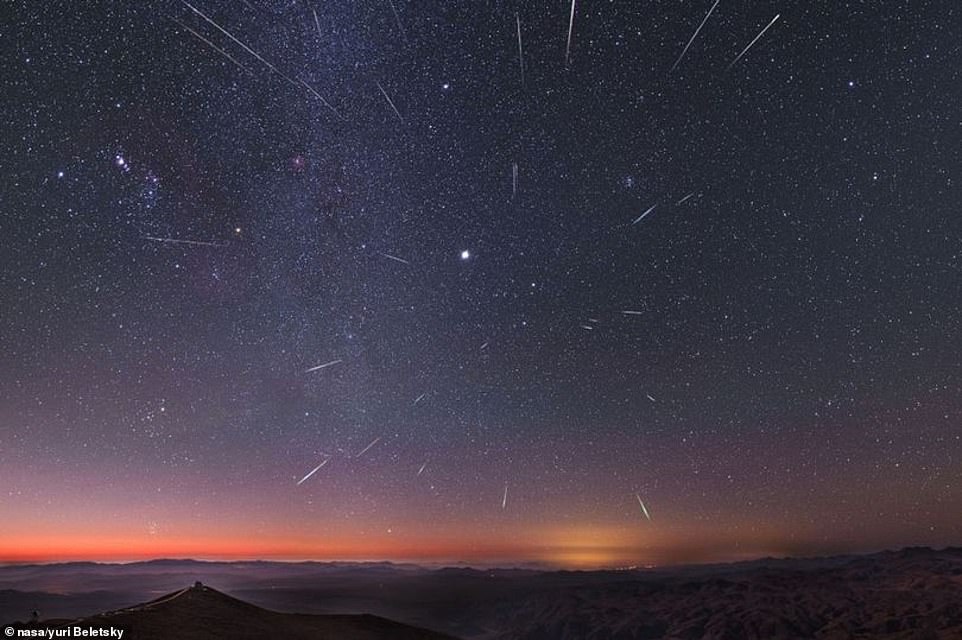 NASA teased stargazers around the world with a stunning photo from the 2013 shower, complete with Jupiter and the Orion Nebula in shot 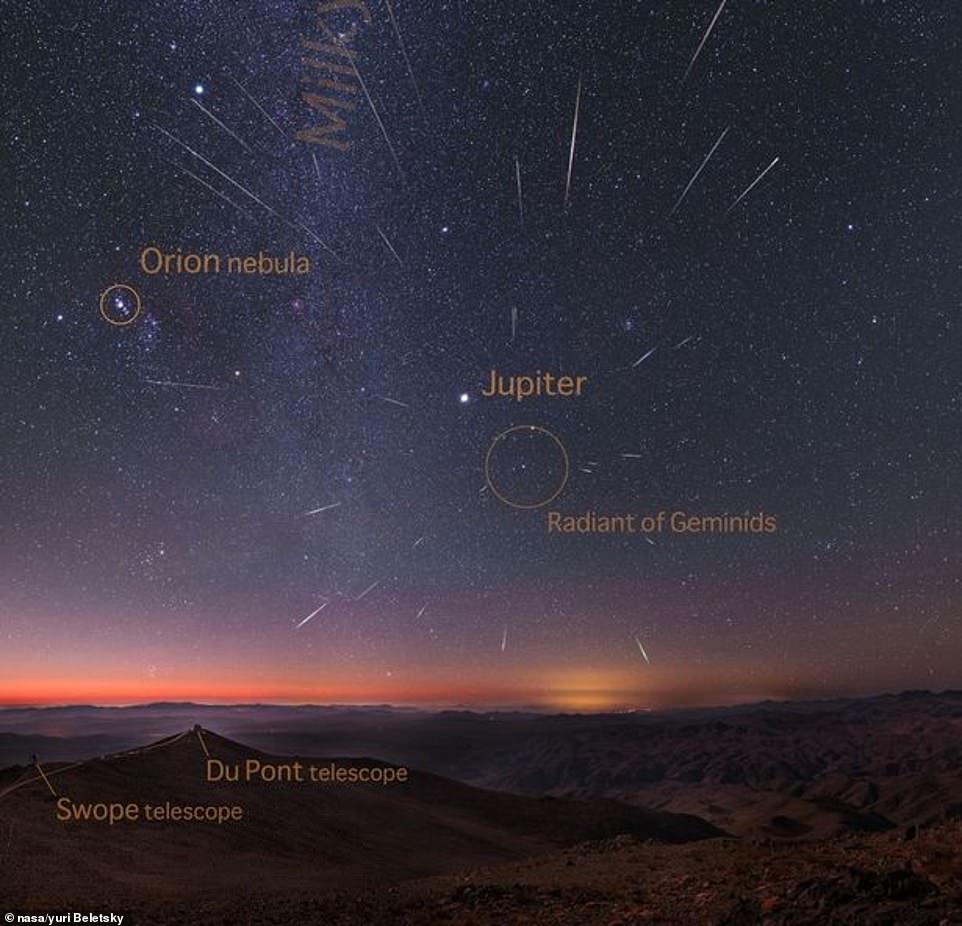 The du Pont Telescope and the SWOPE telescope, as well as a setting sun, pose in the foreground while the Orion nebula and Jupiter enhance the stunning image from 2013 which NASA recently picked as its Astronomy Picture of the Day

WHAT ARE THE GEMINIDS?

The Geminid meteor shower is sometimes referred to as the King of Meteor Showers as it is one of the best of the year, with up to 50 shooting stars streaking across the sky every hour.

The shower happens when the Earth crosses paths with a trail of rocky debris left behind by an asteroid known as 3200 Phaethon.

The debris burns up when it enters the Earth’s atmosphere, giving the appearance of a ‘shooting star’.

The debris burns bright with a yellowish hue, making it distinct and easy to spot.

The shower normally provides around 50 shooting stars an hour – almost one a minute – at its peak, but the brightness of the moon may hide some this year.

‘Instead of seeing 60 or more Geminids per hour one may still be able to count roughly 20 per hour,’ the American Meteor Society said.

Geminids are a staple of the astronomer’s calendar and occur mid-December without fail.

Debris from the passing rock scatters in space and Earth ploughs through the clouds several times throughout December.

Their fiery vaporisation is seen on Earth’s surface as a shooting star.

Stunning images form the event are captured by avid fans all over the world, with NASA plucking one from 2013 as its recent Astronomy Picture of the Day.

It shows the meteors appearing to stream out from a single point in the sky – known as the radiant.

NASA explained: ‘When the Earth crosses a stream of Sun-orbiting meteors, these meteors appear to come from the direction of the stream – with the directional point called the radiant.

‘An example occurs every mid-December for the Geminids meteor shower, as apparent in the featured image.

‘Recorded near the shower’s peak in 2013, the featured skyscape captures Gemini’s shooting stars in a four-hour composite from the dark skies of the Las Campanas Observatory in Chile.’

The du Pont Telescope and the SWOPE telescope, as well as a setting sun, pose in the foreground while the Orion nebula and Jupiter enhance the stunning image.

NASA added: ‘Dust swept up from the orbit of active asteroid 3200 Phaethon, Gemini’s meteors enter the atmosphere travelling at about 22 kilometres per second.’ 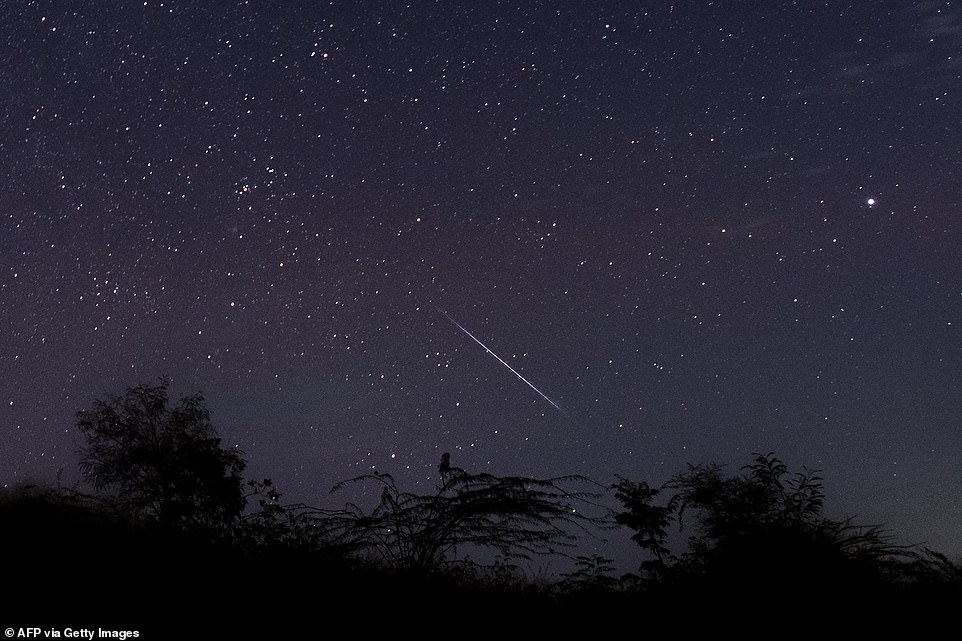 This photo from late December 14, 2018 with a long time exposure shows a meteor streaking through the night sky over Myanmar during the Geminid meteor shower, as seen from Wundwin township near Mandalay city 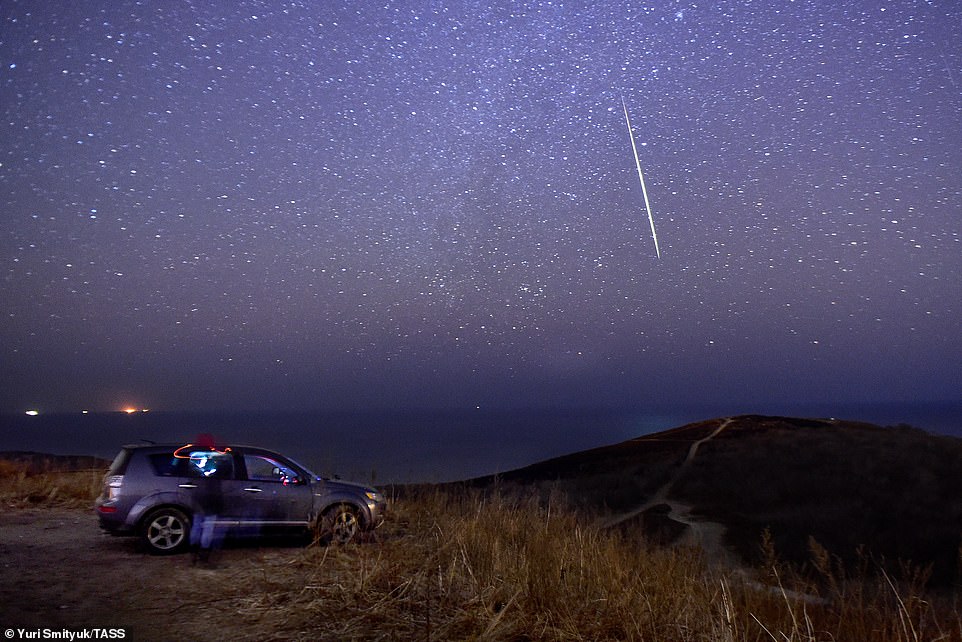 A view of the sky over Russky Island off Vladivostok lit up by the Geminid meteor shower of 2018. The rocks will burn up in the atmosphere at a speed of around 80,000 miles (130,000 kilometres) per hour 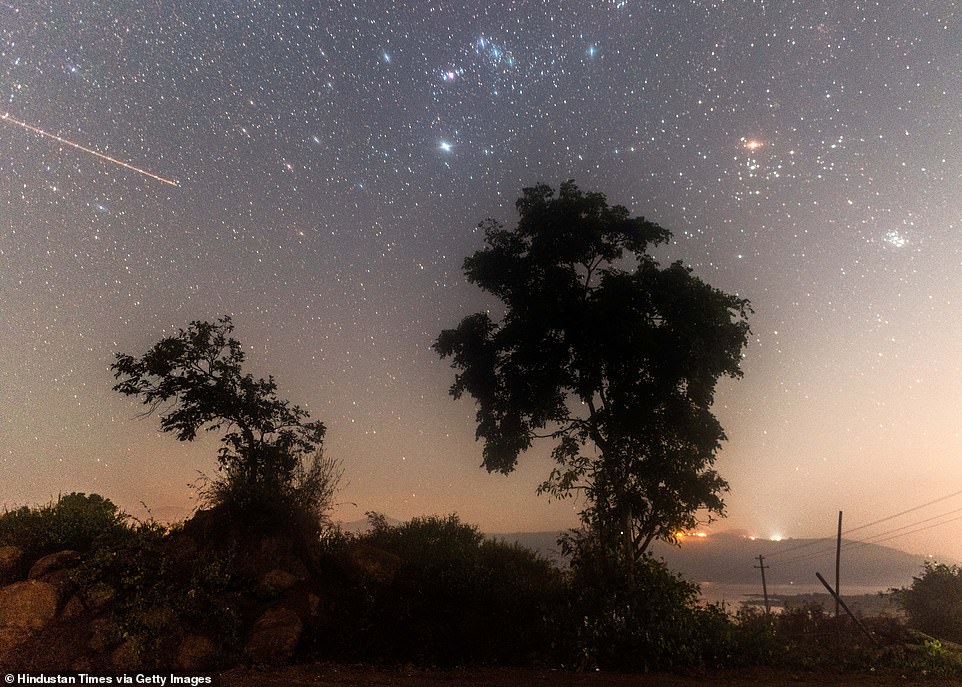 Geminid meteor shower seen from Pawna lake near Lonavala on December 14, 2017 in Mumbai, India. Stargazers across the globe brave the winter chill for spectacular shooting stars every December 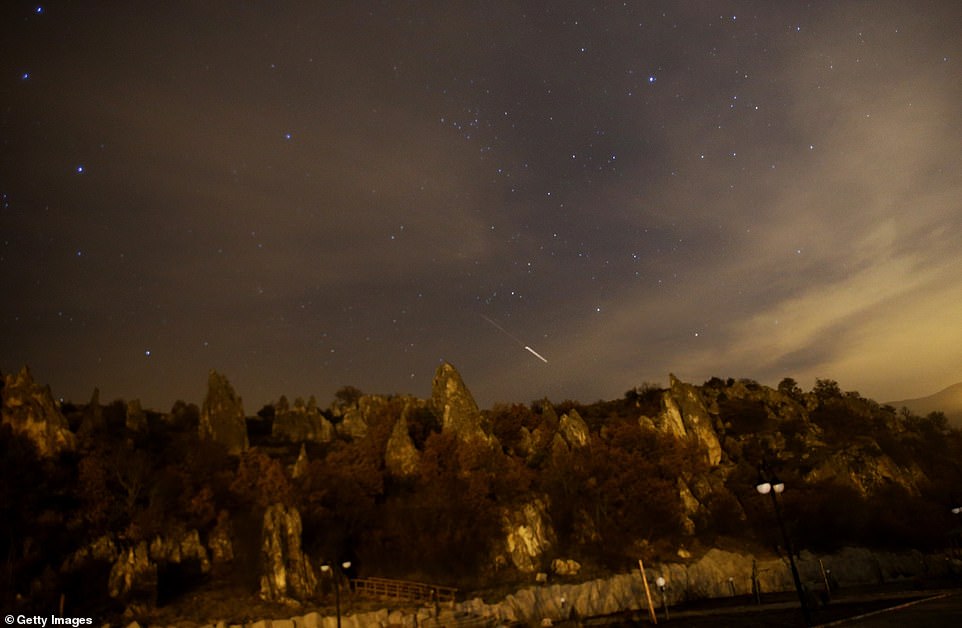 Geminids (pictured, in Turkey, December 14, 2017) are a staple of the astronomer’s calendar and occur mid-December without fail. They originate from a passing mysterious crumbly ‘rock comet’ called 3200 Phaethon

Geminid, meteor, P, Set, shower, to
You may also like: