A German antitrust watchdog is taking its first steps towards a landmark probe against Facebook over its collection of personal data from its users without their consent or knowledge.

The Federal Cartel Office objects in particular to how Facebook acquires data from the other services it owns, including WhatsApp and Instagram.

The probe is being closely watched across Europe amid mounting concerns over how Facebook siphons data on its millions of users, as well as the extensive use of targeted ads by foreign powers seeking to influence elections worldwide.

The Federal Cartel Office, Germany’s national competition regulator, said online tracking of people who aren’t even members is also a chief concern for the probe. 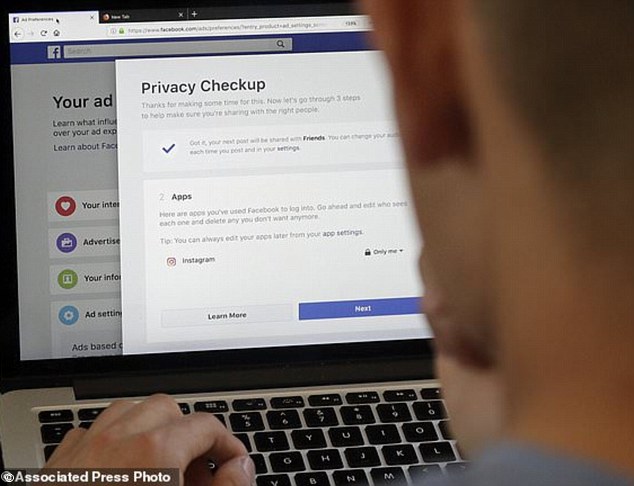 Germany’s antitrust watchdog is taking its first steps in its landmark probe against Facebook over its collection of people’s data without their consent or knowledge. The Federal Cartel Office objects to how Facebook acquires data on people from third-party apps (stock image)

‘We are conscious that this should, and must, go quickly,’ Cartel Office President Andreas Mundt told a news conference on Monday, adding he hoped to take ‘first steps’ this year.

He declined to elaborate about the exact timescale of the operation.

The German probe is not expected to end in fines for Facebook — in stark contrast to European Union probes into Google that have ended in multi-billion-dollar penalties.

However, sources familiar with the matter say the cartel office could require Facebook to take action to address its concerns should the social network fails to do so voluntarily.

Facebook responded earlier this year to the cartel office’s request for information.

The authority was reviewing whether new features – such as a ‘clear history’ option announced by CEO Mark Zuckerberg in May – would address its concerns. The probe is being closely watched in Europe amid mounting concerns over leaks of data on tens of millions of Facebook users, as well as the extensive use of targeted ads by foreign powers seeking to influence US elections. Pictured is Facebook CEO Mark Zuckerberg

‘We need to establish whether this affects our investigation and addresses our concerns,’ Cartel Office President Mr Mundt said.

Separately, Mundt confirmed comments he made in a newspaper interview earlier this month that he may launch an investigation into the e-commerce industry under new powers that enable the FCO to launch sector-wide probes.

The focus would be on so-called ‘hybrid’ platforms such as US e-commerce giant Amazon which sell their own products and services in their store, but that also host third-party traders as well.

‘Our question is: What is the relationship between the platform, which itself is a very powerful trader, and the traders who use the platform?’ said Mr Mundt.

Amazon was the best-known of the e-commerce platforms, but his interest in the matter extended to other players, Mundt added.

The Cartel Office confirmed it will not be looking at suspected tax evasion by third-party traders on e-commerce platforms.

That issue, which German Chancellor Angela Merkel’s government has vowed to tackle, would be one for the economic policy makers, Mundt said.

WHAT ARE THE 18 METHODS USED BY FACEBOOK TO TRACK USERS REVEALED IN LETTERS TO CONGRESS?

1. ‘Device information’ from ‘computers, phones, connected TVs, and other web-connected devices,’ as well as your ‘internet service provider or mobile operator’

2. ‘Mouse movements’, which can help distinguish humans from bots

3. ‘App and file names’, including the types of files on your devices

4. ‘Device operations’ such as whether a window running Facebook is ‘foregrounded or backgrounded’

5. ‘Device signals’, including ‘nearby Wi-Fi access points, beacons, and cell towers’ and ‘signal strength’ as well as Bluetooth signals

6. ‘Other devices that are nearby or on their network’

13. Information ‘about how users use features like our camera’

14. The ‘location of a photo or the date a file was created’ through the file’s metadata

16. Purchases from third-party data providers as well as other information about your ‘online and offline actions’

17. ‘Device IDs, and other identifiers, such as from games, apps or accounts users use’