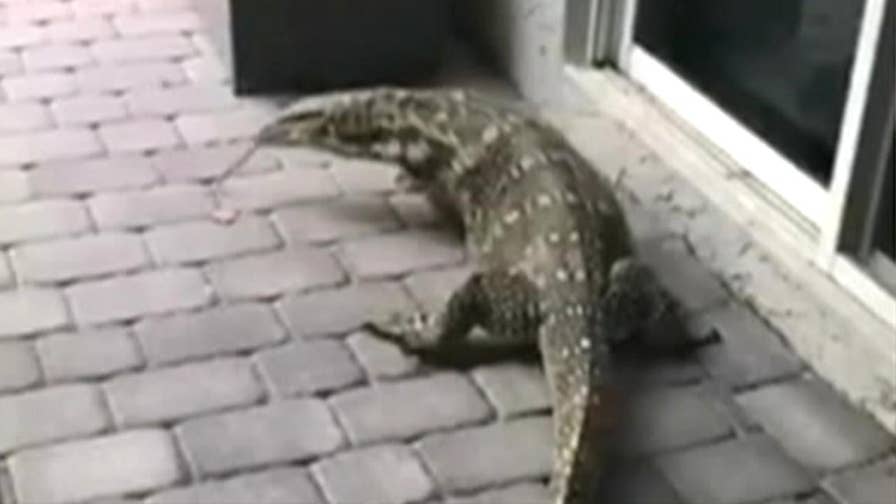 Professional trappers have had no luck catching the Asian water monitor roaming the family's property.

A giant lizard that’s terrorizing a Florida family has no intention of being captured, as it has managed to evade state wildlife officials, trappers and hunting dogs for days.

The reptile — what the South Florida Sun Sentinel identified as a monitor lizard, weighing roughly 150 pounds — was first spotted by Zachary Lieberman a few weeks ago on a horse trail behind his family’s home. While he contacted the Florida Fish and Wildlife Commission (FWC) about the 6-foot lizard, he told Fox News on Friday he never expected the reptile to make its way into his backyard.

On Sunday, the lizard began scratching at the family’s back door.

“I was sitting there playing with the kids when my wife screamed,” he said, adding that he and his 4-year-old daughter and 2-year-old son had coincidentally just finished watching “Jurassic Park.”

Lieberman then went around back, attempting to lure the lizard toward the garage with hopes of enclosing it inside. To his surprise, the reptile followed him. But as soon as it “got the hint,” he said, it “got up on its hindlegs and took off.”

“His speed is what really scares me now; if it can run that fast away, it can come that fast toward someone,” Lieberman said, expressing concern for his two young children.

“The kids are scared to get in pool — and rightfully so with a ‘dinosaur’ living in the backyard,” he continued, adding that the reptile has “nasty claws” and is “terrifying to look at.”

Since Monday, Lieberman said wildlife officials and local trappers have made attempts to capture the lizard. Even the use of dead rodents —a meal that would seemingly be delectable to a giant lizard — hasn’t tricked the reptile into capture.

At one point this week, Lieberman said his friend’s hunting dogs tracked the lizard to a nearby lake. As soon as they spotted it, however, it slid into the water and was lost.

Monitor lizards — which can turn aggressive, wildlife officials have warned — are not native to Florida, the Sun Sentinel reported. They typically eat birds, fish and other small animals.

"The kids are scared to get in pool — and rightfully so with a ‘dinosaur’ living in the backyard."

If captured, a FWC spokesperson told the newspaper it would be either euthanized or taken to a wildlife facility.

“I want to give my wife and kids peace of mind. We’re out there actively trying to capture it alive,” Lieberman said.

A spokesperson for the FWC did not immediately return Fox News’ request for comment on Friday.

evades, florida, Giant, in, lizard
You may also like: