A new company founded by two former USC students wants to change the way rockets are made by using enormous 3-D printers.

The company’s initial project is called Terran-1, a 100-foot tall rocket that initially will carry satellites of up to 2,800 pounds into orbit around the earth.

The current plan is to radically simplify manufacturing, using 100 times fewer parts to create a rocket that’s so easy to manufacture, an AI can handle it. 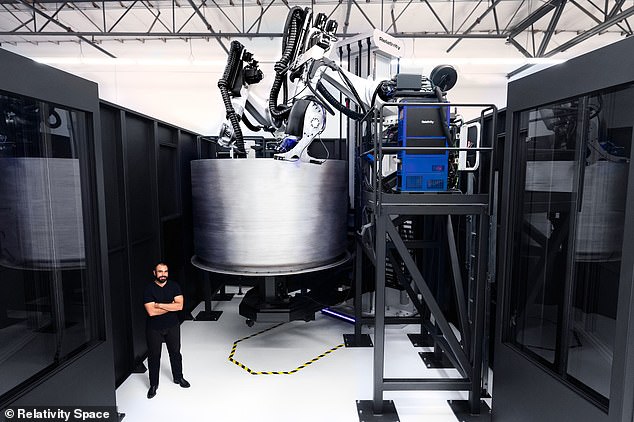 Relativity Space claims to have the largest 3-D printer in the world (pictured above), a 15-foot tall device that uses molten aluminum to create rocket components

Relativity Space is based in Los Angeles, where its working on building a rocket that could launch as early as 2021.

Relativity’s founders see 3-D printing as the key to the company’s success.

The company has built its own custom 3-D printer, called Stargate, which it claims is the largest in the world. 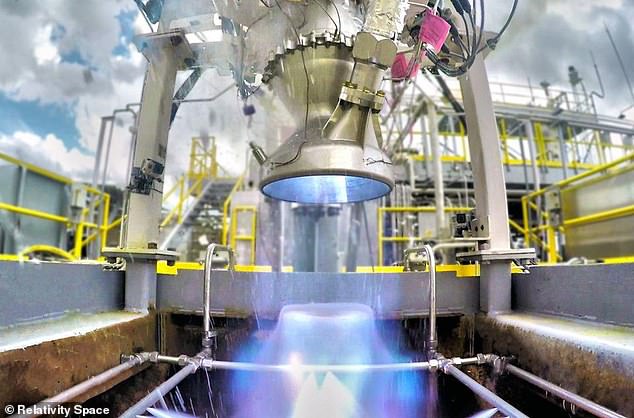 ONE SMALL PRINT FOR MAN…

Nasa has already begun using 3D printers in space by creating small objects for use in the International Space Station.

The device was created by California-based company Made in Space, who were contracted by Nasa to design it for the ISS.

Called the 3D Printing in Zero-G Technology Demonstration, it aims to show the ‘additive manufacturing’ technique can make 3D printed parts and tools in space.

The printer was installed on the station by astronaut Butch Wilmore, in the station’s Microgravity Science Glovebox, which is used for conducting science and technology experiments.

The printer works by heating a relatively low-temperature plastic filament to build parts layer by later in designs supplied to the machine.

The first object it created was a plastic faceplate with the words ‘Made In Space’ written on it.

The company is training an AI to be able to oversee the printing process, something they hope will lead to final goal of being able to 3-D print rockets on Mars and other off-world locations.

‘To print stuff on Mars you need a system that can adapt to very uncertain conditions,’ Relativity’s co-founder Tim Ellis told Wired.

‘So we’re building an algorithm framework that we think will actually be transferable to printing on other planets.’

To date, most 3-D printing applications have focused on rocket parts, but not building an entire rocket from 3-D printed material.

NASA’s RS-25 engine, which the agency believes could take humans to Mars at some point in the 2030s, is partially made from 3-D printed parts.

AI, are, by, Giant, powered, robots
You may also like: