Edie Widder was eating lunch in the mess hall of the Research Vessel Point Sur on Tuesday when her colleague Nathan J. Robinson dashed in. He didn’t have to say anything — in fact, he wasn’t yet quite able to say anything. She ran from the table, made certain by his flailing arms and the look on his face that their expedition had turned up something big.

Dr. Widder, the founder of the Ocean Research and Conservation Association, was part of the team of scientists that in 2012 recorded the first video of a giant squid swimming in its natural habitat, off Japan’s Ogasawara archipelago. For that expedition, she developed a new camera system called Medusa. It employs red light, which most sea creatures can’t see, and, at the end of a milelong plastic line, an optical lure in the form of a ring of LED lights that resembles a bioluminescent jellyfish.

Dr. Widder had hypothesized that the sounds and lights of remote-operated vehicles and submersibles were scaring away large sea creatures, and preventing researchers from observing deep-ocean life as it is really lived.

Dr. Robinson, the director the Cape Eleuthera Institute in the Bahamas, had been watching the videos that Medusa recorded on its latest expedition — a 15-day journey through the Gulf of Mexico, funded by the National Oceanic and Atmospheric Administration’s Office of Ocean Exploration and Research, and called Journey Into Midnight: Light and Life Below the Twilight Zone. As part of the expedition, Dr. Widder was putting her Medusa camera lure to the test, to see if it could capture another squid in a different part of the world.

So far the camera had turned up the usual sorts of deep-sea wonders: lantern sharks, deep-sea jellyfish, what the researchers believed was the first in-the-wild recording of a shrimp spewing bioluminescence.

Then, about 20 hours into the recording from the Medusa’s fifth deployment, Dr. Robinson saw the sharp points of tentacles sneaking into the camera’s view. “My heart felt like exploding,” he said on Thursday, over a shaky phone connection from the ship’s bridge.

At first, the animal stayed on the edge of the screen, suggesting that a squid was stalking the LED bait, pacing alongside it.

And then, through the drifting marine snow, the entire creature emerged from the center of the dark screen: a long, undulating animal that suddenly opened into a mass of twisting arms and tentacles. Two reached out and made a grab for the lure.

For a long moment, the squid seemed to explore the strange non-jellyfish in puzzlement. And then it was gone, shooting back into the dark.

To the scientists, the footage was exhilarating. “People started crowding around, shouting, getting pretty excited, but trying not to get too excited,” Dr. Widder said. “Because we had to be sure it really was what we thought it was.”

The expedition team watched the 25-second clip of the attack over and over on a loop, peering at the details of how suction cups were positioned and consulting identification books. (Giant squids aren’t the only squids that live in the deep sea, and this one was only — “only” — about 10 feet long: a juvenile, in a species that can grow to nearly 40 feet). 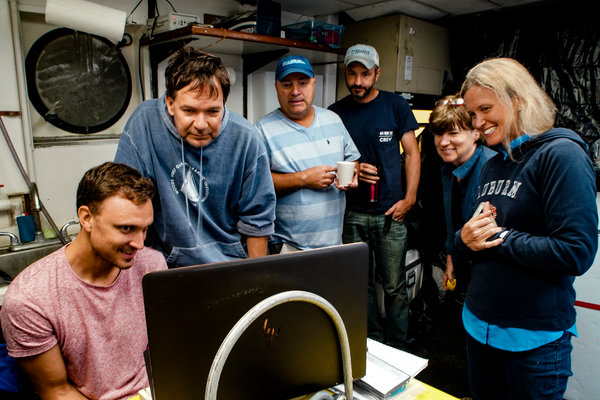 The team reached out to Michael Vecchione, a cephalopod expert at the Smithsonian National Museum of Natural History, to confirm what they were seeing. The size and location of the sighting left only one other possible identification, Dr. Vecchione said: Asperoteuthis, a squid with much longer, thinner tentacles than the large ones, each with a flattened, sucker-covered club, that he saw on the video. This, he agreed, was a giant squid, Architeuthis, the famous colossus of literature.

It was only the second expedition to film a giant squid in its deepwater habitat, and the very first giant squid to be filmed in the waters of the United States. And here it was, only about 100 miles southwest of New Orleans, and within sight of the methane flaring at Appomattox, Shell’s largest floating oil-drilling platform in the Gulf of Mexico. (Another video was made in 2015, of a giant squid near the surface of Japan’s Toyama Bay.)

For Sönke Johnsen, a professor of biology at Duke University and a member of the expedition, the experience was a reminder of how close even the most distant-seeming natural wonders are to human infrastructure and human impacts, from oil spills to the agricultural runoff that regularly turns portions of the gulf into dead zones.

“Even just a hundred miles off the coast, we’re seeing things that they put on the corner of the maps — you know, ‘Here lie monsters,’” he said. “You could be out here, and beneath you are giant squid, the things of our wildest imagination! They’re part of our land, they’re part of our country.”

Deep-sea researchers frequently point out that science knows less about the still largely unexplored deep waters beyond human vision than it does about the surface of Mars.

The giant squid has long been an exemplar of this reality: a gargantuan creature, yet known to humans only because dead specimens washed ashore or huge squid beaks were found in the stomachs of sperm whales, the animals’ primary predator.

Even as fishery depletion has forced ships to trawl in deeper waters, meaning that more giant squid specimens are hauled up in nets, this offers only narrow glimpses into their world. A body on its own, Dr. Vecchione said, “doesn’t tell us anything about how they make a living in their natural environment.”

The new video, recorded at a depth of 759 meters, in a spot where the ocean bottom lies at 2,200 meters, offers rare and useful clues to the animal’s habitat and hunting methods.

Dr. Widder designed the optical lure to emulate the light that a jellyfish emits when it is being attacked. According to the “burglar alarm theory,” the animal’s light is meant to attract some larger predator, which will attack whatever is attacking the jellyfish. That a second giant squid was attracted to the lure seems to bolster the theory.

Still, scientists have little idea how the species as a whole is faring, especially as the oceans it calls home are rapidly warming and acidifying. “It could fall out of existence without us even knowing,” Dr. Robinson said.

But the new video sighting, brief as it is, joins the 2012 footage as an enormous addition to our limited knowledge of giant squids: a tiny glimpse into how a famous but mysterious creature lives in a world that is usually beyond our sight.

As the members of the expedition stood around the monitors, celebrating and high-fiving, they began to say that lightning had struck twice: The Medusa camera had managed to record not one but two sightings of the elusive giant squid, if seven years apart.

Then, just half an hour after Dr. Robinson ran into the mess to alert Dr. Widder, actual lightning struck the ship. An antenna and instruments on the starboard side fell to the deck in fragments, and a plume of smoke filled the air.

The researchers ran to check the Medusa’s computer to make sure the precious footage they had just watched was safe. It was: There was the squid, still emerging from the darkness. 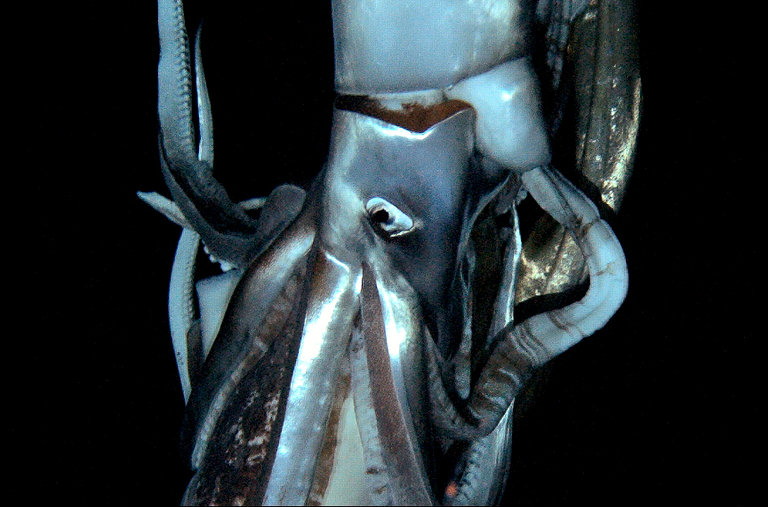 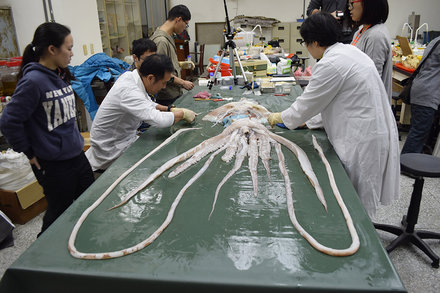 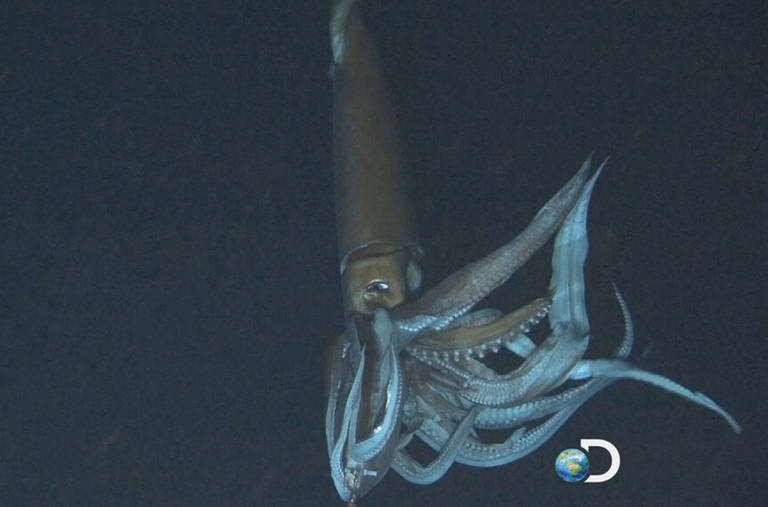 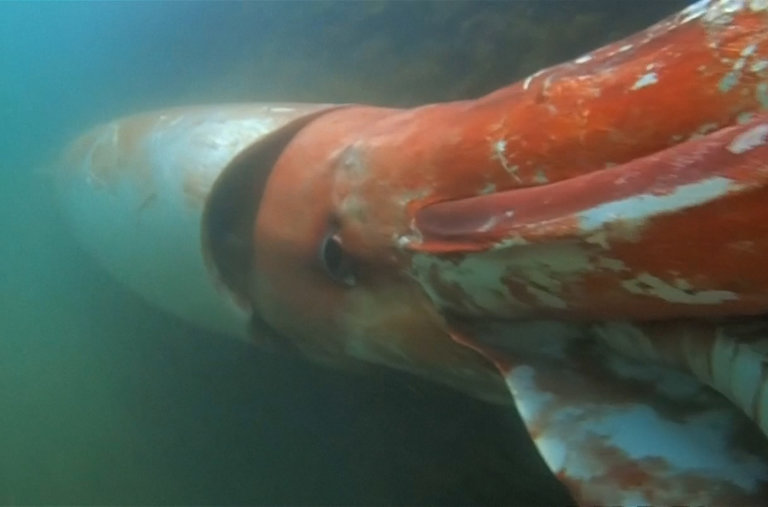 fish, Oceans and Seas, Squid, vid
You may also like: