Google Maps will now show directions to bikeshare docks in ten major cities around the world, including London.

In the UK, Santander Cycles – also referred to as ‘Boris Bikes’ – are involved in the new feature.

The red Santander Cycles already appear on the popular navigation app but are not integrated with the biking directions, which Google Maps also offers.

Now, bikeshare apps will be fully immersed in the app and customers can get directions to the nearest dock, as well as riding directions.

As well as the improved directions, the new feature will also reveal how many bikes are in each dock, showing real-time availability.

While the recognisable red Santander bikes are operated by Transport for London (TfL), independent companies in other cities around the world are also included in the new feature. 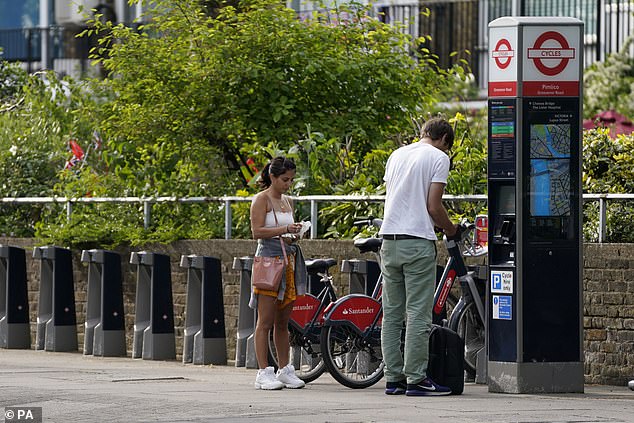 In the UK, docks of Santander Cycles, also referred to as ‘Boris Bikes’, in London will appear on the popular navigation app.  Google says that since February, usage of cycling directions on Google Maps has increased by 91 per cent

Other cities getting the feature today include Mexico City, Rio De Janeiro, Sao Paulo and Taipei.

Google is releasing the feature following increased demand for bike directions on Maps, which was first launched a decade ago.

The company says that, since February, usage of cycling directions on Google Maps has increased by 91 per cent.

As well as this, searches for ‘bike repair near me’ has reached an all-time high.

Now, when users in the ten chosen cities go to the bike section of Maps, they will see end-to-end directions that include docked bikeshare information.

First there will be detailed walking directions to the nearest dock and displayed bike availability.

Then there will be turn-by-turn cycling directions to arrive at the docking station nearest the destination. Google will also provide walking directions from this dock to the end-point.

Google has also partnered with third-party apps to make it easy to book and pay for the hire.

‘Whether people are hitting the road to get their heart pumping or commute safely during COVID-19, we’re making it easier for cyclists everywhere to get on their own bike or a shared one.’

He added that Google Maps is powered by machine learning, complex algorithms and ‘understanding of real-world conditions based on imagery and data from government authorities and community contributions’.

‘As with any mode of transportation right now, cleanliness and safety are top of mind. All of our bikeshare partners have taken steps to increase their cleaning protocols during COVID-19,’ he adds.

‘Please check with your local partner to learn about their latest safety measures.

‘And as always, we encourage you to follow local health and safety guidelines—no matter how you’re getting around.’

adds, biking, di, google, improved
You may also like: