Is this Google’s Pixel 3? Photos claim to feature bezel-less screen

Look familiar? Leaked photos show Google’s Pixel 3 will have an edge to edge screen and a notch – and it could even be made by the same manufacturer as Apple’s iPhone X

A fresh set of rumors about Google’s upcoming Pixel 3 claim that the phone could look a lot like the iPhone X.

Images of purported screen protectors of the Pixel 3 were shared, showing both a base model and what seems to be an XL model.

The regular Pixel 3 is expected to look like the Pixel 2, while the XL will get some features that resemble the iPhone X, according to Bloomberg. 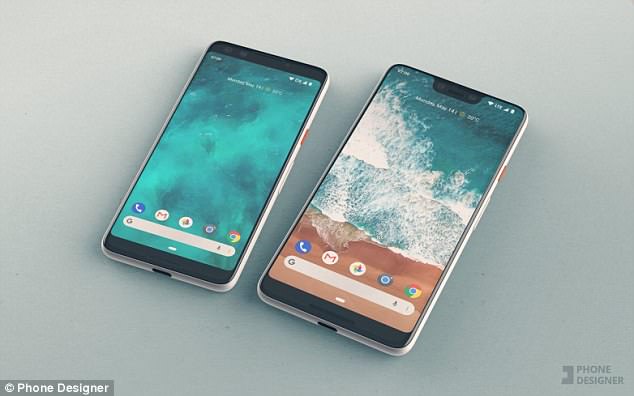 The regular Pixel 3 (left) is expected to look like the Pixel 2, while the XL (right) will get some features that resemble the iPhone X, such as an edge-to-edge screen and a notch

It’s also believed that the Pixel 3 will launch in October with Verizon as its exclusive carrier.

The Pixel 3 XL is expected to feature a ‘nearly edge-to-edge screen’, aside from thicker bezel, or ‘chin’, at the bottom of the display, Bloomberg noted.

It will also feature a notch at the top of its display that’s ‘taller’ than the one included on Apple’s iPhone X.

Google is reportedly hoping to remove the bezels entirely in the future, but has kept them as part of the phone’s design this year to make room for stereo speakers on the front of the device.

Google typically features different designs for its base Pixel model and the XL model, so it’s unsurprising that the notch may only make it onto the larger of the two devices.

Little is known about whether the upcoming Pixel phones will feature OLED screens and who they’ll be made by. 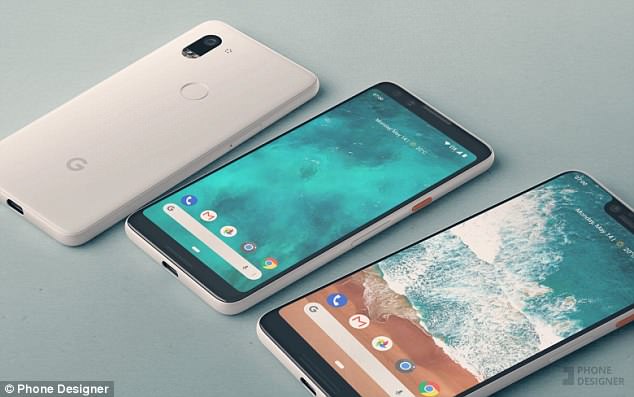 Twitter user @PhoneDesigner also included a rendering of the back of the device, which shows a dual-lens camera, as well as a glass back panel, perhaps for wireless charging 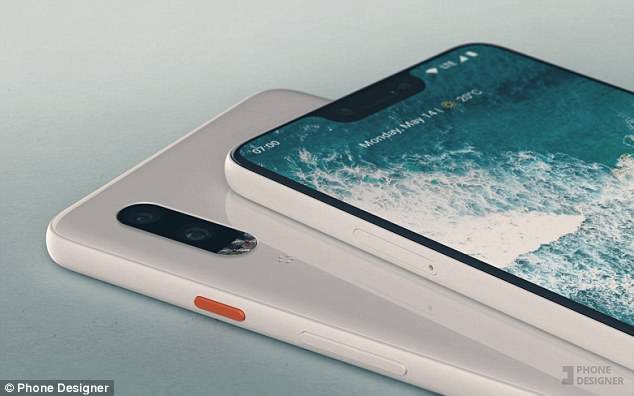 The Pixel 3 XL (pictured in a rendering) is expected to feature a ‘nearly edge-to-edge screen’, aside from thicker bezel, or ‘chin’, at the bottom of the display, according to Bloomberg

Bloomberg noted that Google may end up taking another page from Apple and working with known iPhone manufacturer Foxconn, which has assembled the devices in the past.

Savvy Twitter user @PhoneDesigner created a series of renderings of what the Pixel 3/3 XL could look like based on the screen protectors that were shared online.

The user also included a rendering of the back of the device, which appears to feature a dual-lens camera, as well as a glass back panel, perhaps to allow for wireless charging.

However, Bloomberg claims that Google is likely to stick with a single-lens camera design this time around, though it will still get an upgrade of some sort. 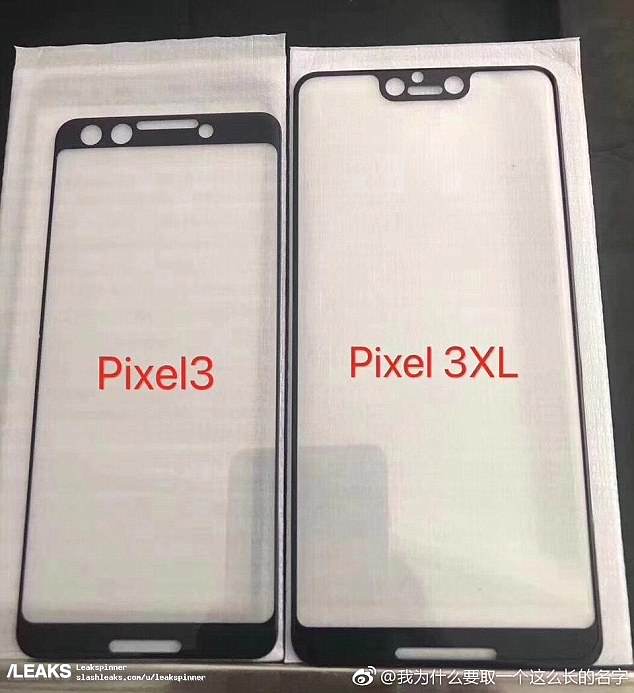 Images of purported screen protectors of the Pixel 3 were shared earlier this week, showing both a base model and what seems to be an XL model. The XL model features a notch

The Pixel 3 XL will likely include two camera lenses on the front of the device that are housed in the notch area.

Including two front-facing cameras could be the first signal that Google is releasing facial recognition technology similar to Apple’s Face ID, according to Gizmodo.

In addition to releasing new hardware, Google is also expected to launch the final version of its latest operating system, Android P, later this year.

The firm showed off a beta version of the OS at its annual I/O developer conference earlier this month. 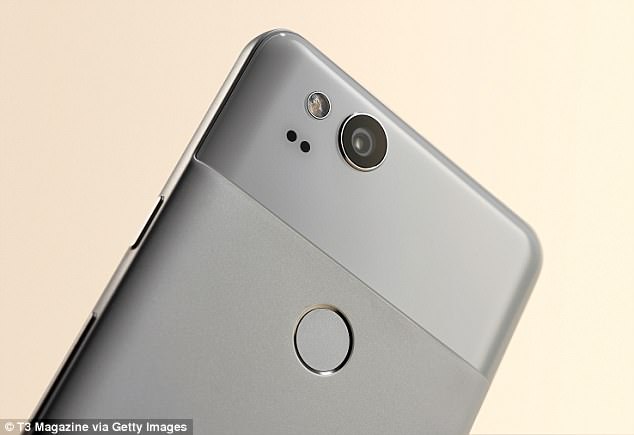 Portrait mode will also work on the front ‘selfie’ camera

Will come with a free Google Home Mini speaker 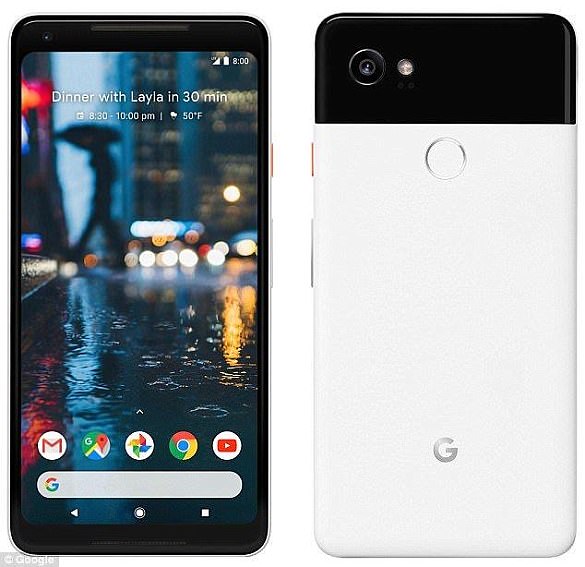 Google has ditched the headphone jack for the device, instead relying on wireless or USB-C headphones.

Will have google’s Lens AI software 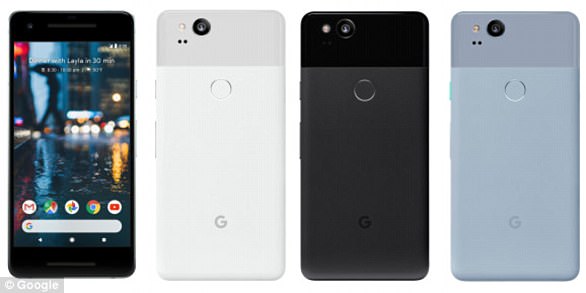 The next generation flagship handset will be officially unveiled in just a few hours. Google is hosting launch events at 9am in San Francisco, 12pm in New York, 5pm in London and 6pm in Paris (all local times)

The larger LG-made Pixel 2 XL will come in a Black & White and Just Black and will be available with 64GB or 128GB storage. 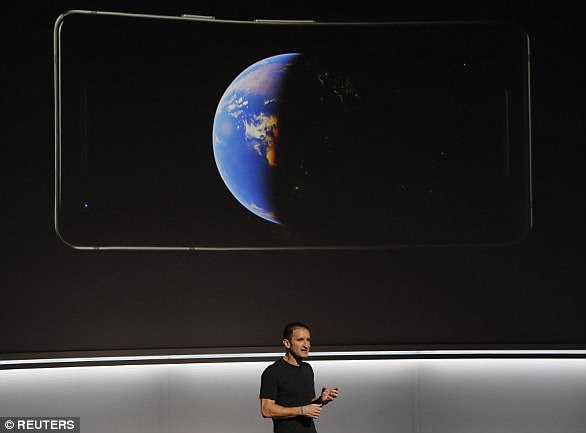 The new phones have an ‘always on display’ that will display the time, notifications and even what song is playing

The firm says Android P addresses many of the ‘pain points’ of use that have been outlined by users over the years.

Like the rumors suggested, there’s now a single clean home button at the bottom of the screen.

It’ll support the edge-to-edge notch design popularized by Apple, as well as some of the gesture controls used on the iPhone X.

For example, you can swipe up once to see which apps you have open and then swipe up again, to open your apps page.