It seems gorillas are much better at socializing than we give them credit for.

In gorilla communities, and particularly among males, it’s commonly thought their interactions are driven by survival-based behaviors, like competition over a mate or food.

But, researchers say friendships go a long way, too.

A new study on African mountain gorillas has found that their lives are very much influenced by the lifelong bonds they form with other members of the group – much like human social interaction. 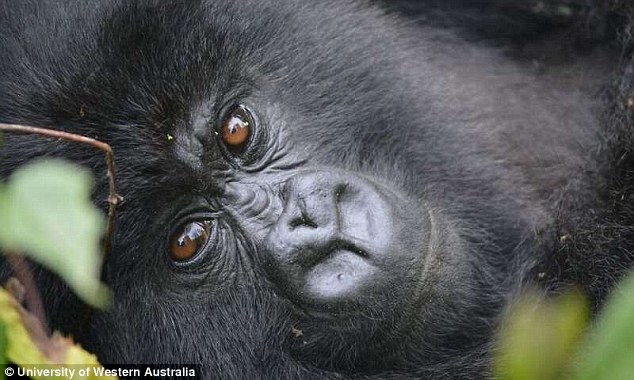 In gorilla communities, and particularly among males, it’s commonly thought their interactions are driven by survival-based behaviors, like competition over a mate or food. But, researchers say friendships go a long way, too

In the study, published to the journal Animal Behaviour, researchers from the University of Western Australia observed 10 groups of mountain gorillas in Rwanda over the course of a year.

They also analyzed data from the Karisoke Research Center, which was collected between 2003 and 2015.

And, the researchers found bonds between gorillas – including between former group members – were critical in keeping the peace.

‘What’s interesting is people often have the perception that gorilla behaviour is very much influenced by competition for females or over a food source, but there’s also a good proportion of behaviour that is peaceful as a result of long-lasting social relationships,’ says lead researcher Dr. Melanie Mirville.

The observations showed that the male gorillas often got into fights with others to protect members of their groups.

But, when in contact with former group members that had moved on to other communities, hostility between the males dropped. 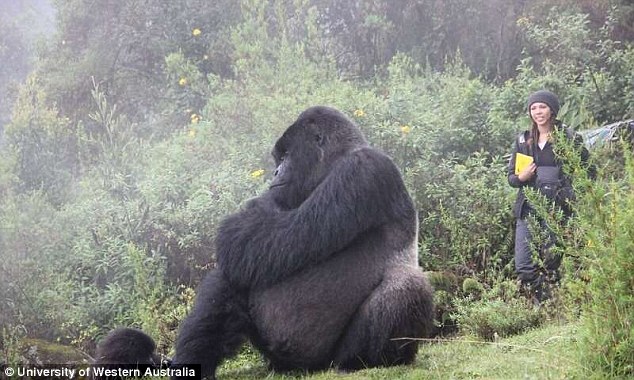 Sometimes, the researchers say they could even be seen playing and grooming each other.

In many ways, their interactions paralleled some of those in our own daily lives.

‘As humans we are friendlier if we bump into someone we know in comparison to people we don’t know or trust,’ Mirville said.

WHY ARE NON-HUMAN PRIMATE NUMBERS DECLINING?

Behind the collapse in numbers is an increase in industrial agriculture, large-scale cattle ranching, logging, oil and gas drilling, mining, dam building and road construction.

The illegal trade in bushmeat – killing apes and monkeys for their flesh – is also decimating the animals, as is changing climates and diseases spread from humans to apes.

Growing trees to produce palm oil – used in many popular foods – is a particular threat to primates in Indonesia, as is mining for gold and sapphires in Madagascar.

With many species living in rainforests, the cutting down of millions of acres of forest to supply the increasing demand for timber or to clear land for agriculture is destroying their habitat and making populations more fragmented.

‘We also have an ongoing history of conflict and war, alliances and peace-making. By understanding the intergroup behaviors of primates in response to their existing social history, we can better understand the complex origins of our own remarkable social behaviour, including hostility to people or groups we are not familiar with.’

But, just because they may socialize like us doesn’t mean humans should go approaching them.

‘The gorillas studied have been observed by researchers from the day of birth so they didn’t see us as a threat,’ said Dr Mirville.

‘You still want to keep a good distance from the group though; the alpha males can grow up to around 200kg and can be very protective.’