What it’s like to be eaten by a great white shark: Incredible footage takes you inside the mouth of the beast as it bites down on an underwater drone

This terrifying footage shows what it would be like to be eaten by a great white shark.

Researchers got more than they bargained for when a great white shark took a bite of the underwater camera drone they were using to film in the Pacific Ocean.

The resulting footage shows a shark powering through the water, before attempting to swallow the drone in a single bite.

Inside the mouth of the predator, the camera continues to film and shows the muscles inside the shark’s jaw contracting with effort.

The shark eventually spits out the camera and swims away, defeated.

The video was shot by Dominik Fretz, a software developer and explorer for National Geographic, using an underwater camera drone called a Trident.

Writing in his National Geographic blog, he said: ‘The sharks were very curious about the ROV [remotely operated underwater vehicle].

‘In fact, one of them got so curious that it tried to bite Trident. Apparently, though, Tridents aren’t tasty for sharks and it got spat out again right away.

‘Trident was fine, except for a couple of bite marks on the bumpers. The tether wasn’t cut, how, I don’t know.

‘The shark was fine too, it went about its business and kept coming back a few times.’ 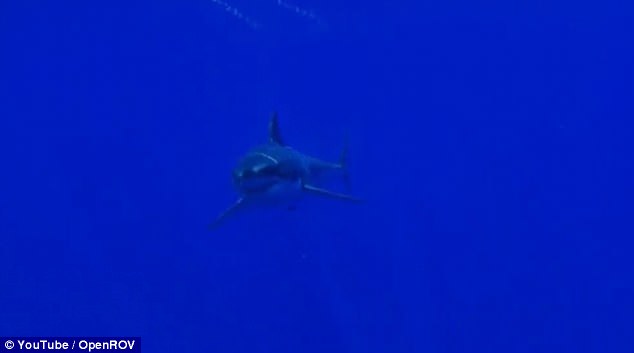 The breath-taking footage was shot using an ROV, or remotely operated underwater vehicle. These allow researchers to observe great white sharks without endangering themselves 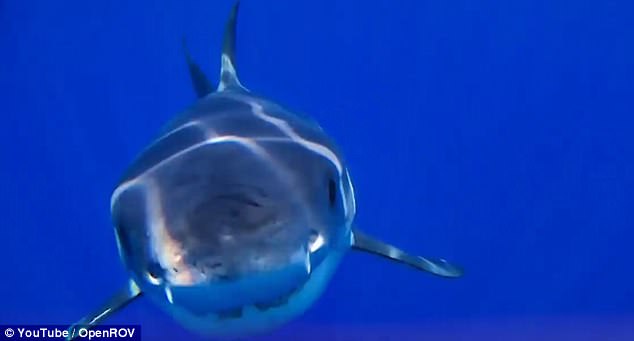 As the camera on the Trident submarine drone pans around, the great white shark suddenly appears in-front of the lens 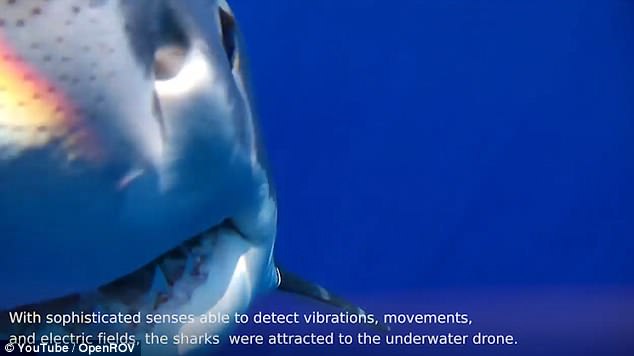 According to National Geographic explorer Dominik Fretz, the Trident camera itself was unharmed after its encounter with a great white – save for a few bite marks on its bumpers 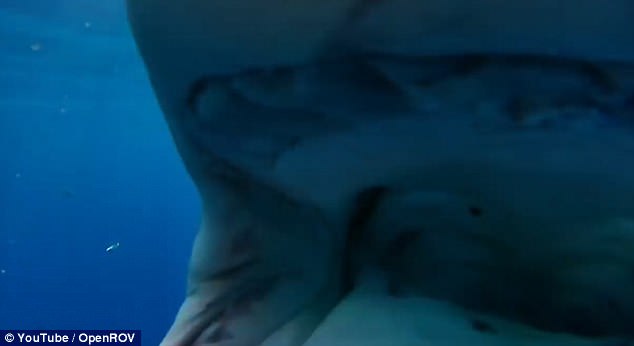 Those who are afraid of sharks should look away! The underwater drone footage shows a graphic amount of detail from inside the mouth of the great white shark

The Trident underwater camera drone was launched by a former NASA engineer via a crowdfunded Kickstarter campaign which gained huge traction back in November 2015.

The drone can be piloted to depths of 100 metres (328 ft) using a remote control.

Controls are relayed to a Wi-Fi compatible buoy on the surface of the water, which is tethered to the submarine camera drone beneath the waves.

The drone is less invasive to the great white sharks and much safer for the researchers themselves.

Great white sharks, or Carcharodon Carcharias, are the largest predatory fish on earth, growing to an average of 15 feet, though specimens longer than 20 feet and weighing 5,000 pounds have been recorded, according to National Geographic.

Their fearsome jaws are lined with up to 300 serrated teeth arranged in several rows, which are continually replaced.

The largest great white sharks are believed to have a maximum bite force of some 18,216 Newtons.

For comparison, lions typically generate 4,450 Newtons of force when they bite.

Sharks are the most efficient predators on earth and have long terrified humans.