Follow
Home » Science » Greenland is approaching the threshold of an irreversible melt, and the consequences for coastal cities could be dire

Greenland is approaching the threshold of an irreversible melt, and the consequences for coastal cities could be dire

Greenland’s ice is melting six times faster now than it was four decades ago.

Two decades ago, the annual average was just 50 billion.

All that lost ice means Greenland’s melting has contributed to more than 0.5 inches of global sea-level rise since 1972, the researchers reported. Alarmingly, half of that increase came about in the last eight years alone.

Another study published in January 2019 used data from satellites and a GPS network to determine that Greenland’s ice is melting faster than scientists previously thought. That study highlighted risks of melting in Greenland’s southwestern region, which isn’t typically known to be a source of ice loss, asQuartz reported.

“This is going to cause additional sea-level rise,” Michael Bevis, lead author of the January study and a professor at Ohio State University,told National Geographic. “We are watching the ice sheet hit a tipping point.” 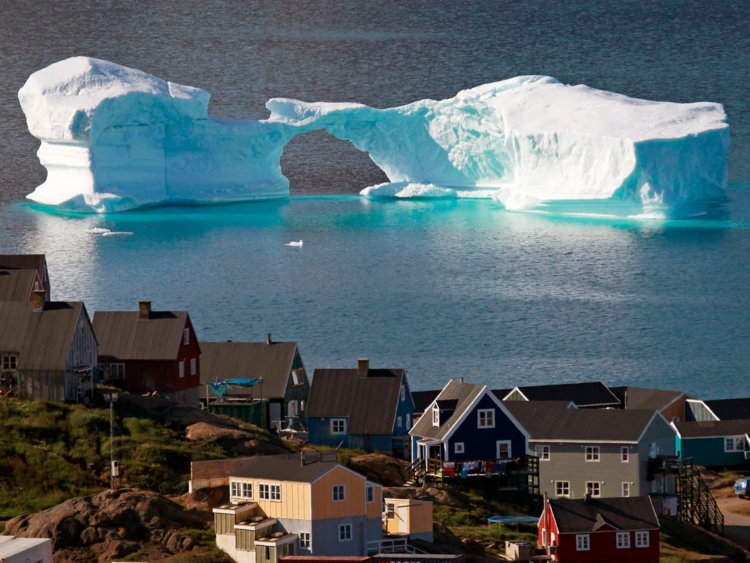 This news comes in the wake of another ominous finding: Antarctica’s melting is also speeding up. In the 1980s, Antarctica lost 40 billion tons of ice annually. In the last decade, that number jumped to an average of 252 billion tons per year — just a hair behind Greenland’s new average.

What happens if the entire Greenland ice sheet melts?

Roughly 1.7 million square kilometers (656,000 square miles) in size, the Greenland ice sheet covers an area almost three times that of Texas. Together with Antarctica’s ice sheet, it contains more than 99% of the world’s fresh water, according to the National Snow and Ice Data Center.

Most of that water is frozen in masses of ice and snow that can be up to 10,000 feet thick. But as human activity sends more greenhouse gases into the atmosphere, the oceans absorb 93% excess heat those gases trap. The warm air and water is leading ice sheets to melt at unprecedented rates.

If the entire Greenland ice sheet were to melt — granted, this would take place over centuries — it would mean a 23-foot rise in sea level, on average. That’s enough to submerge the southern tip of Florida.

If both Antarctica and Greenland’s ice sheets were to melt, that would lead sea levels to rise more than 200 feet (and Florida would disappear).

NASA has created an interactive tool that helps track sea-level rise projections based on how much the two ice sheets are melting. One thing the tool makes very clear: Coastal cities will be heavily impacted.

In the event of a full ice melt, according to amap from National Geographic, cities like Amsterdam, Netherlands; Stockholm, Sweden; Buenos Aires, Argentina; Dakar, Senegal; and Cancun, Mexico (to name just a few) would vanish.