Grey squirrels are on the rise in Britain as they feast on nuts and seeds left out for tits, nuthatches and finches

They’ve already driven out red squirrels, and gardeners have long suspected them of digging up tulip bulbs.

Now grey squirrels have another target – bird feeders. Researchers have warned they are snaffling the nuts and seeds left out for tits, nuthatches and finches.

The team from the University of Reading, who filmed 19 suburban gardens and recorded more than 33,000 visits by wildlife, caught grey squirrels taking food from feeders almost half of the time. 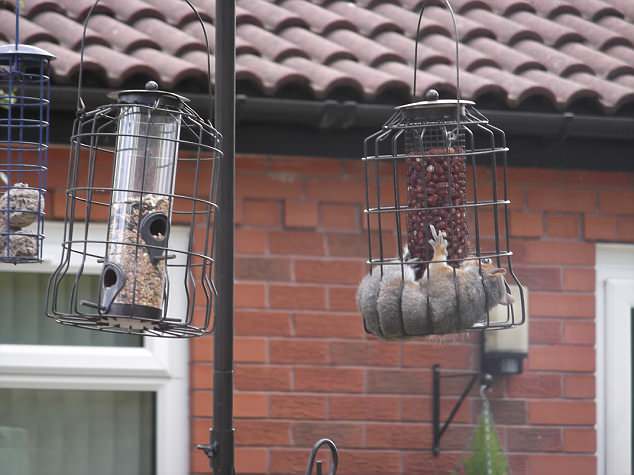 Ready meal: a grey squirrel tucks into bird food provided at a Nottingham home (stock photo). Professor Mark Fellowes, University of Reading, said they are ‘loved by many but are a leading threat to our native red squirrels’

They appeared to be driving away birds as well as stealing their food. There are also concerns that food left out for the birds may be fuelling the rise of the numbers of the greys.

Professor Mark Fellowes, of the school of biological sciences at Reading, said: ‘Grey squirrels are loved by many, but at the same time they are the leading threat to our native red squirrels, can be a major pest in orchards and forestry, and they raid bird nests.’

He said feeders were providing for ‘unintended recipients’ and added: ‘It’s not only that birds lose out on a source of food, but we are supporting a species that can harm the ones we intend to help.’

Almost half of households feed wild birds. Squirrels can be kept at bay by feeders encased in a cage that admits the birds but not the squirrels. 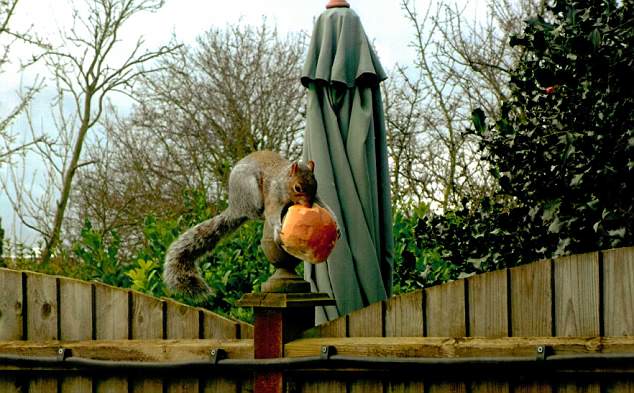 This hungry squirrel is tucking into a crusty bread roll. In gardens where squirrels dominated, feeders were visited less often by birds, even when squirrels were not present

The Reading researchers set up infrared motion detectors and automatic cameras to see which wildlife used bird feeders. They found grey squirrels took up more than 44 per cent of the time during which the feeders were used, being most attracted to peanuts.

Great tits and nuthatches were more likely to stay away if the rodents were there.

In gardens where squirrels dominated, feeders were visited less often by birds, even when squirrels were not present.

Only ten out of almost 25,000 visits to feeders by birds occurred when a squirrel was also there. The research was published in the journal Landscape and Urban Planning.

Grey squirrels were introduced to England from America in the 19th century and are now thought to number around 2.5million. They infect reds with pox and take their food. The red population is now thought to stand at around 15,000.