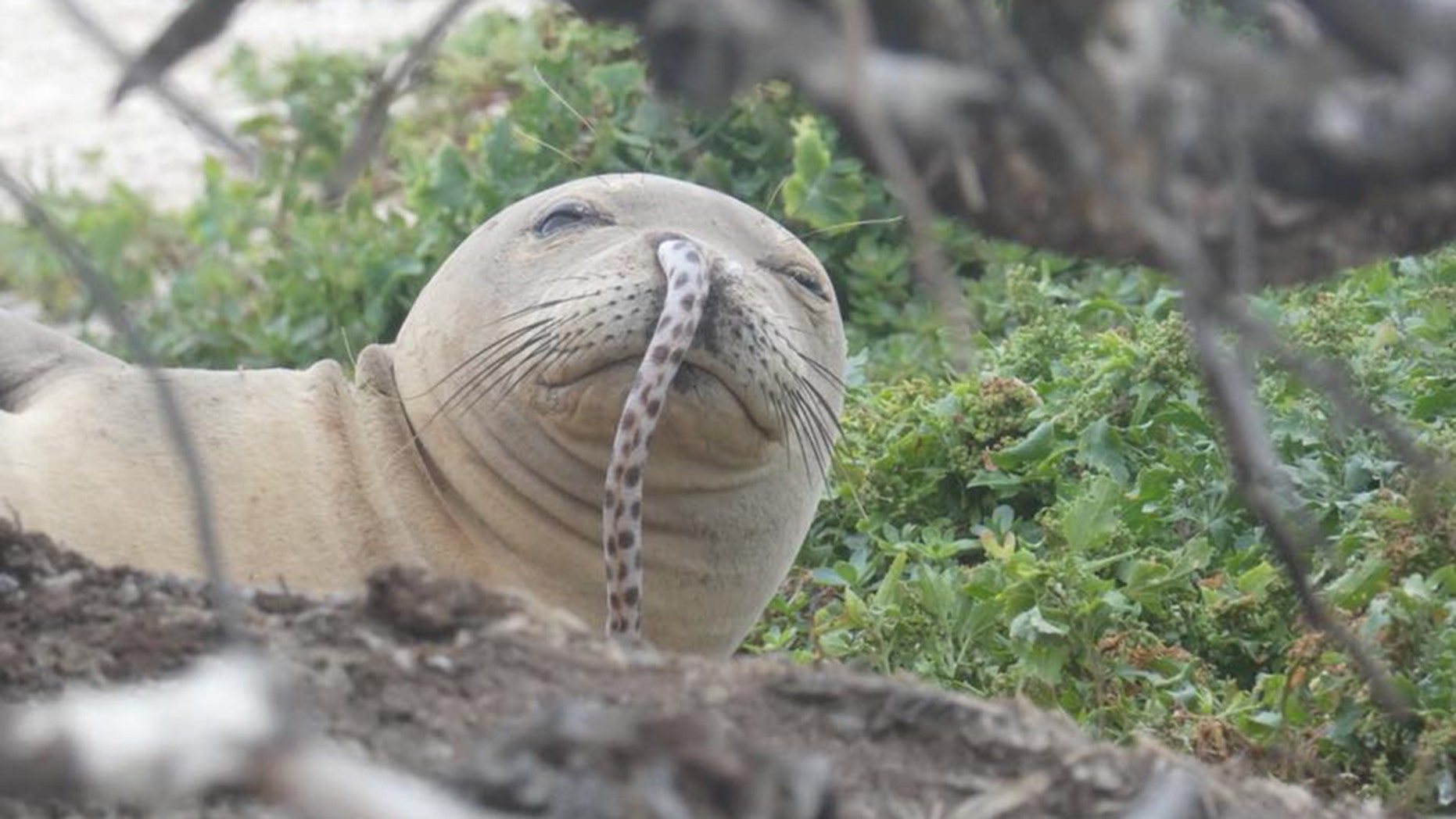 Talk about a nosey nuisance.

A Hawaiian monk seal was spotted over the summer with an eel hanging out of its nose, according to a photo shared by the Hawaiian Monk Seal Research Program on Monday.

“Mondays…it might not have been a good one for you but it had to have been better than an eel in your nose,” the group, which is a part of the National Oceanic and Atmospheric Administration (NOAA), wrote.

Experts with the organization told Hawaii News Now the eel was seen dangling from the seal’s nose near the French Frigate Shoals over the summer. Field researchers — who were in the area at the time to study the seal population there — noted the “rare” sighting and were quick to restrain the animal before removing the lengthy creature from its snout.

The removal process reportedly took less than a minute, according to the publication.

The eel likely entered the monk seal’s nose when it was feeding in coral reefs, as these sea creatures “feed by sticking their noses in coral reefs and digging in sand,” the group told Hawaii News Now, noting "it is possible the eel was defending itself or trying to escape and forced itself into the nose.”

There's also a possibility “the seal regurgitated it and it went out the wrong place. More likely the first…,” the group told the publication.

Officials with the Hawaiian Monk Seal Research Program said they have reported on the odd phenomenon in the past, explaining it was "first noted a few years back," the group added.

"We have now found juvenile seals with eels stuck in their noses on multiple occasions. In all cases, the eel was successfully removed and the seals were fine. The eels, however, did not make it,” the organization wrote.

The picture elicited a variety of jokes and comments on social media, many users comparing the sighting to other unusual — and dangerous — trends among today’s youth, such as eating Tide Pods and snorting condoms.

“Where are these young seals learning this eel sniffing stuff from? Video games?” one person joked.

“It starts with Tide Pods….” another said.

Hawaiian monk seals are “one of the most endangered seal species in the world,” according to the NOAA. While recovery efforts have slowed the declining population, the “current numbers are only about one-third of historic population levels."

These seals, which are capable of holding their breath for 20 minutes and can dive nearly 2,000 feet, are endemic to the Hawaiian archipelago and are not found anywhere else in the world.

Habitat loss, disease and intentional killing, among other reasons, are all factors which threaten the Hawaiian monk seal species.

eel, Hawaiian, monk, seal, St, With
You may also like: