Hear the eerie sounds emitted between Saturn and its moon Enceladus

Saturn’s eerie song: Scientists reveal the spooky sounds emitted by the strange bond between the gas giant and its moon Enceladus

An eerie chorus of spooky celestial sounds has been found hidden in strange signals picked up on by a doomed Saturn space probe in its final days.

As the Cassini Saturn orbiter plummeted ever closer to the surface of its host planet, experts used instruments aboard to analyse waves of energy.

They recorded for the first time patterns created by plasma – a hot, charged gas – passing between the Saturn and its sixth largest moon, Enceladus.

Experts noticed that the vibrating signals looked incredibly similar to soundwaves, and decided to use the recordings to create an audio file that could be listened to.

What this revealed was a strange ‘whooshing’ sound, somewhat reminiscent of a jet engine flying overhead.

Their observations showed for the first time that the waves travel on magnetic field lines connecting Saturn directly to Enceladus.

The magnetic field lines they found are like an electrical circuit between the two bodies, with energy flowing back and forth.

Cassini also detected electromagnetic waves in the audio frequency range and scientists were able to amplify and play those signals through a speaker.

The recording time was compressed from 16 minutes to 28.5 seconds.

‘Enceladus is this little generator going around Saturn, and we know it is a continuous source of energy,’ said Ali Sulaiman, a planetary scientist at the University of Iowa who was involved in the study and a member of the RPWS team.

‘Now we find that Saturn responds by launching signals in the form of plasma waves, through the circuit of magnetic field lines connecting it to Enceladus hundreds of thousands of miles (km) away.’ 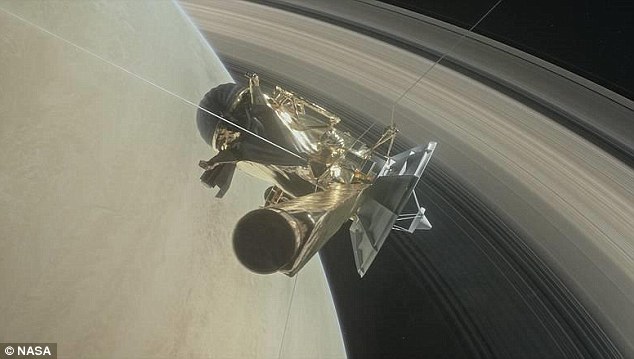 It has been almost ten months since the Casinni space probe plummeted into the surface of Saturn, yet it continues to unlock the secrets of its host. Experts used instruments aboard the doomed probe in its final days to analyse the plasma waves emanating from the gas giant

They used Cassini to convert the recordings of plasma waves into an audio file that we can hear – in the same way a radio translates electromagnetic waves into music. What this revealed was a strange ‘whooshing’ sound, somewhat reminiscent of a jet engine flying close overhead.

Much like air or water, plasma – the fourth state of matter, a hot, charged gas – generates waves to carry energy.

The RPWS instrument on board Nasa’s Cassini spacecraft recorded intense plasma waves during one of its closest encounters to Saturn.

The recording was captured September 2, 2017, two weeks before Cassini was deliberately plunged into the atmosphere of Saturn.

The interaction of Saturn and Enceladus is different from the relationship of Earth and its Moon.

Enceladus is immersed in Saturn’s magnetic field and is geologically active, emitting plumes of water vapour that become ionized and fill the environment around Saturn. 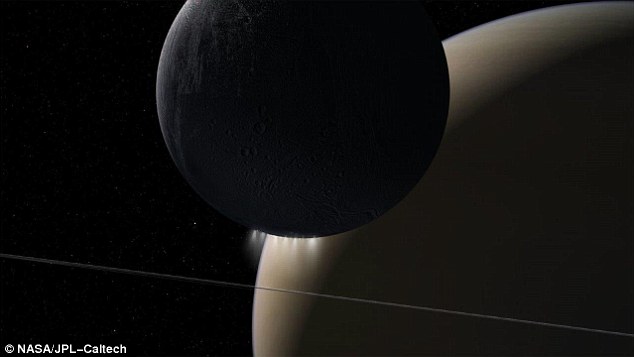 Enceladus (foreground), captured in this Cassini image, is Saturn’s (background) sixth largest moon, at 313 miles wide. Enceladus is immersed in Saturn’s magnetic field and is geologically active, emitting water vapour that become ionised and fill the environment around Saturn

WHAT IS ENCELADUS AND COULD IT HOST ALIEN LIFE? 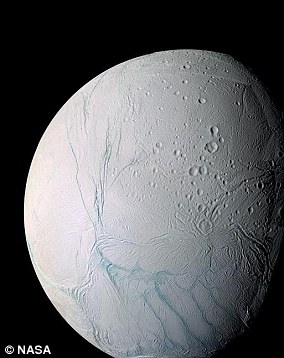 It is an icy satellite with hydrothermal activity – a rare combination – with vents spewing water vapour and ice particles out from a global ocean buried beneath the moon’s frozen crust.

A handful of worlds are thought to have liquid water oceans beneath their frozen shell, but only Enceladus sprays its ocean out into space, where a spacecraft can sample it.

Microbes on our planet either produce these compounds or use them for growth, leading some to speculate that tiny organisms live in Enceladus’s hidden ocean.

This means that while Enceladus may look ‘inhospitable’ like Saturn’s other moons, it is a prime candidate in our search for alien life. 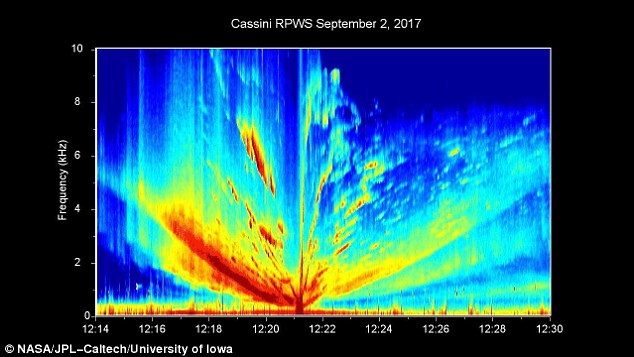 Waves of energy moving outward from Saturn to its rings and its moon Enceladus are responsible for an eerie chorus of celestial music, a new study has shown. Experts converted recordings of plasma waves (pictured) into a ‘whooshing’ audio file that we can hear

A handful of worlds are thought to have liquid water oceans beneath their frozen shell, but only Enceladus sprays its ocean out into space, where a spacecraft can sample it.

Microbes on our planet either produce these compounds or use them for growth, leading some to speculate that tiny organisms live in Enceladus’s hidden ocean.

This means that while Enceladus may look ‘inhospitable’ like Saturn’s other moons, it is a prime candidate in our search for alien life.

Our own Moon does not interact in the same way with Earth. Similar interactions take place between Saturn and its rings, as they are also very dynamic.

The full findings were published in the journal Geophysical Research Letters.

WHAT DID CASSINI DISCOVER DURING ITS 20-YEAR MISSION IN SPACE?

An artist’s impression of the Cassini spacecraft studying Saturn

In 2000 it spent six months studying Jupiter before reaching Saturn in 2004.

In that time, it discovered six more moons around Saturn, three-dimensional structures towering above Saturn’s rings, and a giant storm that raged across the planet for nearly a year.

On 13 December 2004 it made its first flyby of Saturn’s moons Titan and Dione.

On 24 December it released the European Space Agency-built Huygens probe on Saturn’s moon Titan to study its atmosphere and surface composition.

There it discovered eerie hydrocarbon lakes made from ethane and methane.

In 2008, Cassini completed its primary mission to explore the Saturn system and began its mission extension (the Cassini Equinox Mission).

In 2010 it began its second mission (Cassini Solstice Mission) which lasted until it exploded in Saturn’s atmosphere.

In December of the following year it tracked the transit of Venus to test the feasibility of observing planets outside our solar system.

In March 2013 Cassini made the last flyby of Saturn’s moon Rhea and measured its internal structure and gravitational pull.

Cassini didn’t just study Saturn – it also captured incredible views of its many moons. In the image above, Saturn’s moon Enceladus can be seen drifting before the rings and the tiny moon Pandora. It was captured on Nov. 1, 2009, with the entire scene is backlit by the Sun

In July of that year Cassini captured a black-lit Saturn to examine the rings in fine detail and also captured an image of Earth.

In April of this year it completed its closest flyby of Titan and started its Grande Finale orbit which finished on September 15.

‘The mission has changed the way we think of where life may have developed beyond our Earth,’ said Andrew Coates, head of the Planetary Science Group at Mullard Space Science Laboratory at University College London.

‘As well as Mars, outer planet moons like Enceladus, Europa and even Titan are now top contenders for life elsewhere,’ he added. ‘We’ve completely rewritten the textbooks about Saturn.’