Is Christmas in crisis? Swedish herders say there is not enough snow for reindeer to start their annual Arctic migration

Reindeer in the Arctic, along with the herders who rely on them for income, have already begun to feel the effects of climate change.

The indigenous Sami people in Sweden say abnormal temperature fluctuations in the region have disrupted this year’s migration, according to NBC News.

Snow plays a key role in reindeer migration, and is crucial for herders’ ability to track their movement – but without snow, they’ve been forced to postpone their activities. 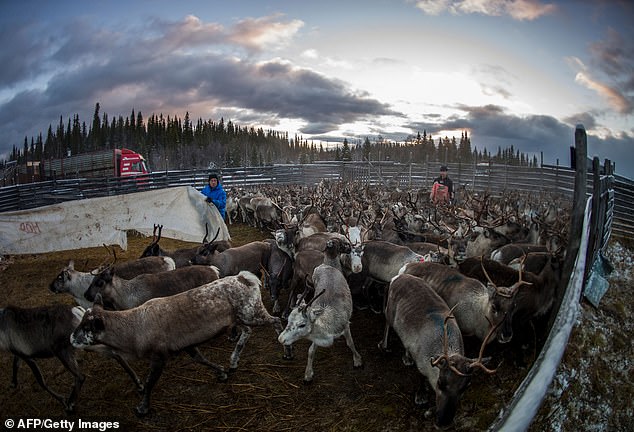 Reindeer in the Arctic, along with the herders who rely on them for income, have already begun to feel the effects of climate change. File photo

It isn’t just warm temperatures throwing a wrench in their plans this year, local herders say.

Instead, the region has experienced fluctuations above and below freezing so far, causing an unusual cycle of freezing and thawing.

While the Sami people typically corral reindeer over a two-week period in November, this year’s weather has gotten in the way.

‘I can’t ask my father what to do now because he hasn’t seen this; it hasn’t happened during his lifetime.’

Reindeer herders gather the animals and kill them for meat during September, leaving the remaining reindeer to graze in the area until winter migration, according to NBC.

When the time comes for the reindeer to move, the herders follow them on snowmobiles. But, without snow, there’s no way for them to do that.

Sweden’s unusual weather comes as the World Meteorological Organization revealed 2018 will be among the hottest years on record. 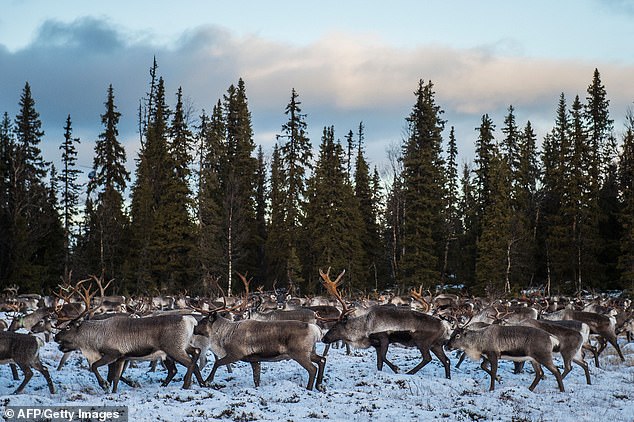 Snow plays a key role in reindeer migration, and is crucial for herders’ ability to track their movement – but without snow, they’ve been forced to postpone their activities. File photo

According to the new WMO report, this year will sit at number four.

Global warming is causing the temperatures all around the world to increase.

This is particularly prominent at latitudes nearer the poles.

Rising temperatures, permafrost, glaciers and ice sheets are all struggling to stay in tact in the face of the warmer climate.

As temperatures have risen to more than a degree above pre-industrial levels, ice continues melt.

This positive feedback loop is also found on glaciers atop mountains.

Many of these have been frozen since the last ice age and researchers are seeing considerable retreat.

Some animal and plant species rely heavily on the cold conditions that the glaciers provide and are migrating to higher altitudes to find suitable habitat.

This is putting severe strain on the ecosystems as more animals and more species are living in an ever-shrinking region.

On top of the environmental pressure, the lack of ice on mountains is vastly increasing the risks of landslides and volcanic eruptions.

The phenomena is found in several mountain ranges around the world.

It has also been seen in regions of Antarctica.

And, the Arctic is often hardest hit by climate changes.

‘Greenhouse gas concentrations are once again at record levels and if the current trend continues we may see temperature increases 3-5°C by the end of the century,’ said WMO Secretary-General Patteri Taalas.

‘If we exploit all known fossil fuel resources, the temperature rise will be considerably higher,” he said.

Herders, not, reindeer, say, Snow
You may also like: