History of human migration throughout the Americas is MAPPED

History of human migration throughout the Americas is MAPPED: Discoveries ranging from Alaska to the Andes redefines our understanding of how people conquered the continent

Research involving scientists from all over the world has redefined our understanding of how humans conquered the Americas.

Analysis of prehistoric human remains ranging from Alaska to Patagonia has helped redefine the movement of people across and throughout North and South America.

People arrived on the continent from East Asia around 20,000 years ago and now three separate papers used the same data to reveal new information about the continent’s colonisation.

One study unpicked the mystery surrounding the early migration of humans through Alaska and discovered the first people to arrive actually contained three different genetic groups.

They found that the majority of Central and South American people are descended from these three ancestral lineages – one of which was lost forever 9,000 years ago.

A separate study looked at how people conquered the Andes with unique adaptations around 12,000 years ago and how the European invasion of the 1530s affected the people who lived at the top of the mountain compared to those residing at the base.

The final finding from the international study reveals the native population of Alaska, the Ancient Beringians, stayed in the region for thousands of years after arriving. 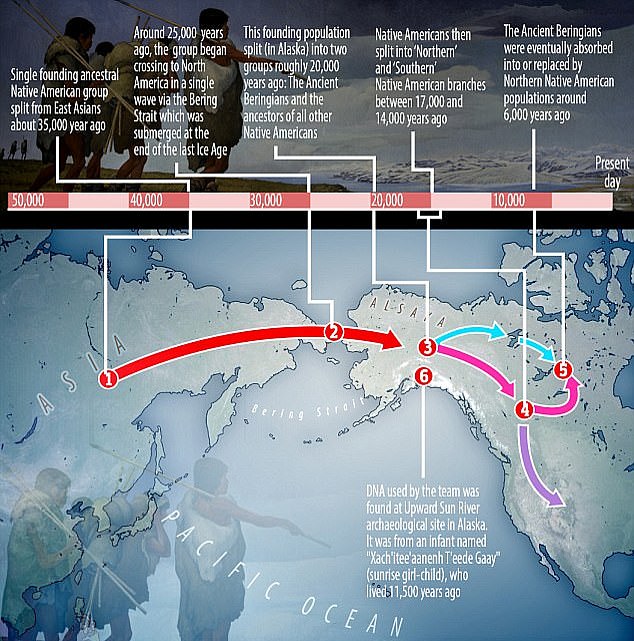 Previous research has focused on the initial migrations into the Americas and less attention has been paid to the subsequent expansion throughout the continents.

‘Nearly all Central and South Americans arose from a star-like radiation of the first lineage into at least three branches,’ says Cosimo Posth, an archaeogeneticist from the Max Planck Institute for the Science of Human History who was involved in one of the studies.

‘That means that nearly all the ancestry of Central and South Americans came from the same source population, albeit one that had already diversified prior to its spread into South America.

‘With DNA evidence largely based on present-day people, those multiple gene flow events are undetectable, highlighting the power of ancient DNA data.’

Three migrations for the price of one

It found that the majority of Central and South American ancestry stemmed from at least three different streams of people from North America.

Previous studies found that the first populations of Americans split from their Siberian and East Asian ancestors around 20,000 years ago.

The authors analysed remains dating back 11,000 years to see if there were any other migrations than the one that was already known.

According to the research, published today in Cell, it was 10,000 years ago that a complex picture of population expansion and diversification emerged throughout the Americas.

People moved widely, randomly and unevenly which created pockets of humans throughout the Americas, the new research revealed.

This critical stage in American history created various populations, some of which were invisible to everything except the genetic record probed by this study. 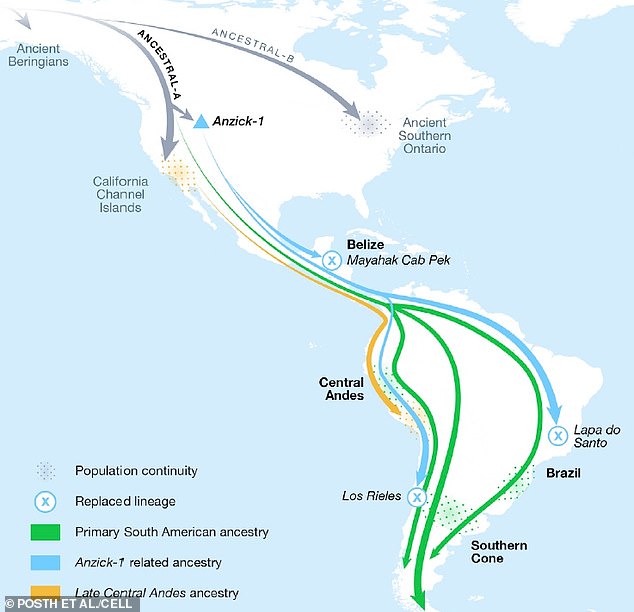 DNA of 49 individuals spanning 10,000 years in Belize, Brazil, the Central Andes, and southern South America was analysed. It found that the majority of Central and South American ancestry stemmed from at least three different streams of people from North America

A distinctive DNA type associated with the Clovis culture was found in Chile, Brazil and Belize between 11,000 and 9,000 years ago with this technique.

‘A key discovery was that a Clovis culture-associated individual from North America dating to around 12,800 years ago shares distinctive ancestry with the oldest Chilean, Brazilian and Belizean individuals,’ said co-lead author Cosimo Posth of the Max Planck Institute for the Science of Human History.

‘This supports the hypothesis that the expansion of people who spread the Clovis culture in North America also reached Central and South America.’

Evidence of this culture disappears from the archaeological record and modern genomes around 9,000 years ago. 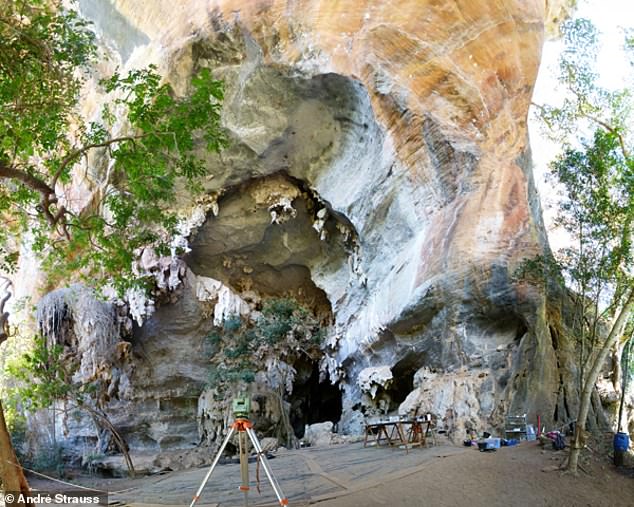 A distinctive DNA type associated with the Clovis culture was found in Chile, Brazil and Belize between 11,000 and 9,000 years ago with this technique. This cave in Brazil was one of the sites where ancient remains were found

‘We have shown that there was a continent-wide population replacement that began at least 9,000 years ago.’

The second previously unknown spread of people revealed ancient Californians from the Channel Islands off the Pacific Coast have a distinctive shared ancestry with people from the southern Peruvian Andes.

A common genetic group between these two factions dates back to 4,200 years ago.

‘It could be that this ancestry arrived in South America thousands of years before and we simply don’t have earlier individuals showing it,’ said Nathan Nakatsuka, a research assistant in the Reich lab at Harvard Medical School and co-lead author of the study.

WHEN DID NORTHERN AND SOUTHERN NATIVES SPLIT?

While the Ancient Beringians split from all other Native Americans around 20,000 years ago, the Northern and Southern groups diverged later on.

Based on previous research, this suggests they must have already been on the American continent south of the glacial ice when they diverged.

The divide probably occurred after their ancestors had passed through the Laurentide and Cordilleran ice sheets.

These are two vast glaciers that covered what is now Canada and parts of the northern United States, but began to thaw around this time.

The ice sheet isolated southbound travellers from the Ancient Beringians in Alaska, who were eventually replaced or absorbed by other Native American populations.

Although modern populations in Alaska and northern Canada belong to the Northern Native American branch, the new analysis shows that these derive from a later ‘back’ migration north, long after the initial migration events.

A separate study published in Science Advances focuses on the genetic prehistory of the South American Andes.

It found the people who lived there had become genetically and culturally adapted to the harsh environment of the mountain range.

Archaeological evidence has previously suggested that the first permanent human occupation of the Andean highlands began more than 12,000 years ago.

The cold temperatures, low oxygen and strong UV radiation that comes with living at high altitude drove natural selection and led to unique set of biological and social adaptations.

The latest study compared ancient genomes and modern genomes and concluded that  permanent highland populations were established in the Andes between 9,200 and 8,200 years ago, far sooner than what has been reported.

They found that genetic traits arose for adaptations to the heart and lungs to cope with the harsh conditions via cardiovascular modifications. 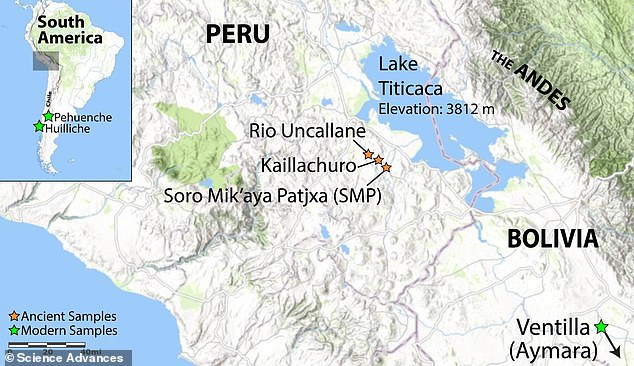 The latest study compared ancient genomes and modern genomes and concluded that permanent highland populations were established in the Andes between 9,200 and 8,200 years ago, far sooner than what has been reported previously 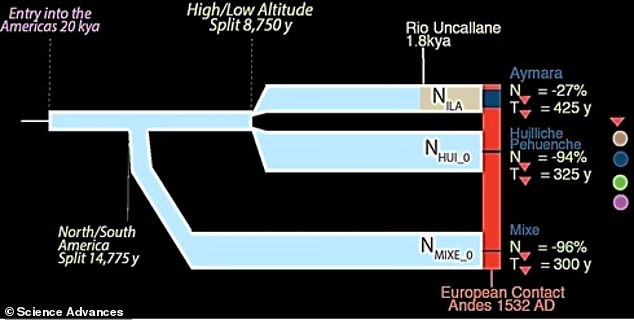 Andean highlanders tend to have enlarged right ventricles which may have improved oxygen intake, enhancing blood flow to the lungs, the researchers say. They did however develop an environmental adaptation to help break down starch.

The South Americans did not develop the responses to hypoxia seen in natives of other high-altitude settings, such as Tibet.

Andean highlanders tend to have enlarged right ventricles which may have improved oxygen intake, enhancing blood flow to the lungs, the researchers say.

They did however develop an environmental adaptation to genes associated with is responsible for the expression of MGAM (maltase-glucoamylase) – an intestinal enzyme useful for breaking down starch.

Potatoes are rich in starch and the authors suggest that the early population developed this adaptation to maximise nutrition from their potato-led diet.

‘We have very ancient samples from the high Andes,’ said Anna Di Rienzo from the University of Chicago, who looked at the Andean genomes.

‘Those early settlers have the closest affinity to the people who now live in that area.

‘This is a harsh, cold, resource-poor environment, with low oxygen levels, but people there adapted to that habitat and the agrarian lifestyle.’

Highland Andeans experienced much smaller population declines after being exposed to European explorers who first came to South America in the 1530s.

In the lowlands the result of this interaction was catastrophic and historical records point to 90 per cent of residents being wiped-out.

This was far worse than those living atop the mountains who had a comparatively gentile 27 per cent population reduction.

A 9,000-year-old child’s tooth found in Alaska as part of the multifaceted study has reshaped the understanding of early Alaskan people, their genetic background and their diets.

The tooth is only the third known remnant of a population of the early migrants known as Ancient Beringians.

It proves that Ancient Beringians stayed in Alaska for thousands of years after first migrating across the Bering Land Bridge that connected eastern Asia and Alaska. 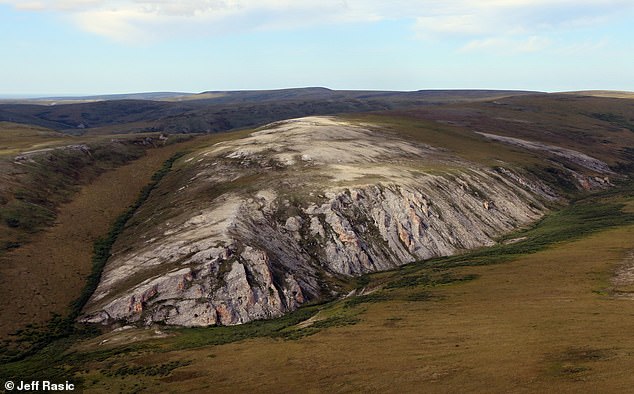 The Trail Creek Caves site on Alaska’s Seward Peninsula. Analysis of a 9,000-year-old tooth from the site has broadened understanding of Alaska’s early inhabitants, their genetic background and their diets

WHO WERE THE ANCIENT BERINGIANS?

According to the researchers’ timeline, a single, ancestral Native American population first emerged as a separate group around 36,000 years ago in northeast Asia.

Constant contact with Asian populations continued until around 25,000 years ago, when the gene flow between the two groups ceased.

This cessation was probably caused by brutal changes in the climate, which isolated the Native American ancestors.

At this point the group likely began crossing to Alaska via an ancient land bridge spanning the Bering Strait which was submerged at the end of the last Ice Age.

Then, about 20,000 years ago, that group split into two lineages: The Ancient Beringians and the ancestors of all other Native Americans.

The newly discovered group continued to breed with their Native American cousins at least until the Upward Sun River girl was born in Alaska around 8,500 years later.

The tooth was analyses by researchers at the University of Alaska Fairbanks and published in the journal Science and was first excavated in 1949.

It remained in storage in Denmark for 70 years but the latest efforts to understand it and date it revealed it belonged to a 1½-year-old child.

It is by far the oldest human specimen in the North American Arctic and genomic testing connected the tooth to the Ancient Beringian people.

‘This one small tooth is a treasure trove of information about Alaska’s early populations, not only their genetic affinities but also their movements, interactions with other people and diet,’ said Jeff Rasic, a Fairbanks-based archaeologist.

Analysis of this bone fragment revealed the child was fed on a diet of land-based animals which came as a surprise to the researchers who expected to see evidence of marine animals and fish.

‘This new find confirms our predictions that Ancient Beringians are directly linked with the cultural group known as the Denali Complex, which was widespread in Alaska and the Yukon Territory from 12,500 to about 6000 years ago,’ said University of Alaska Fairbanks professor Ben Potter, who wasn’t involved in the Science paper.