Hollowed out asteroids could take humans to other solar systems

Forget spaceships, future travellers could travel between stars on giant hollowed out asteroids, according to a radical new plan.

Students and researchers at Delft University of Technology are designing a starship they say will be able to keep generations of crew alive as they cross the gulf between stars.

Dubbed the Evolving Asteroid Starship, the project would create a gigantic city-like structure on the asteroid, allowing travellers stay on board for decades at a time. 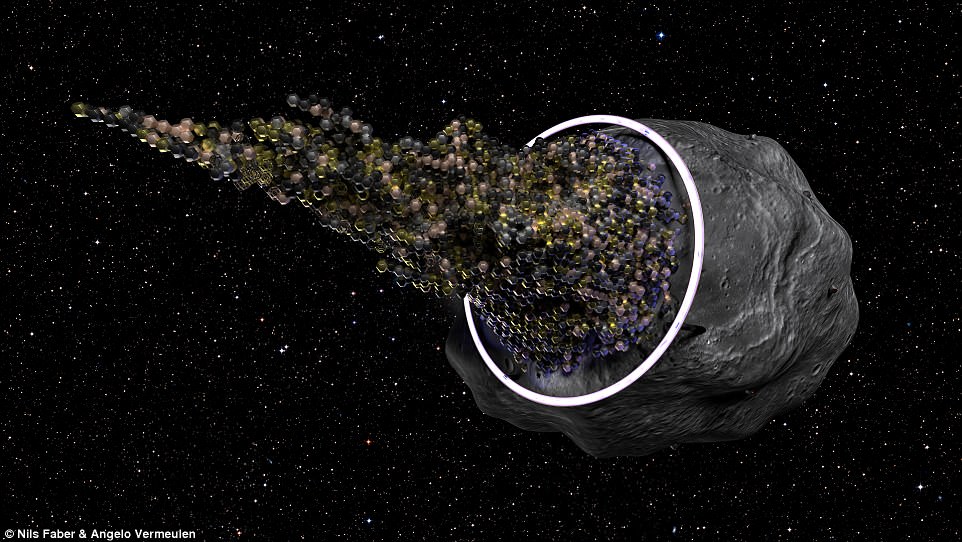 According to a video of the system in action, dozens of rockets would be attached to the asteroid, allowing operator to propel it and control its direction.

The TU Delft Starship Team is already working with the European Space Agency on the life support systems needed.

‘We need self-sustaining and evolvable space technology capable of enduring the many decades needed to journey from our Solar System to another,’ said DSTART leader Angelo Vermeulen.

The aim is not just to focus on the necessary technology, but also to consider the biological and social factors involved in making such a gargantuan voyage feasible.

A journey beyond our solar system could take decades, even a century, the researchers say.

‘A starship therefore also needs to be capable of evolving,’ they claim.

‘After all, returning to earth to tackle problems, as we saw during the subsequent missions towards the moon, is out of the question.

‘The ship needs to be able to behave like a living organism that uses raw materials available in space, such as asteroids.

‘These can be exploited for fuel and building materials, for example.’

3D printers can be taken on board to print new parts and to expand the ship, as it also needs to accommodate a growing ecosystem.

‘As part of that, we are looking at the kind of regenerative life-support system pioneered by the ESA-led MELiSSA (Micro-Ecological Life Support System Alternative) programme.’

The 11-nation MELiSSA programme hopes to build a system, inspired by a natural aquatic ecosystem, to efficiently convert organic waste and carbon dioxide into oxygen, water and food.

A MELiSSA pilot plant in Spain’s Autonomous University of Barcelona hosts an airtight multi-compartment loop with a ‘bioreactor’ powered by light and oxygen-producing algae to keep ‘crews’ of rats alive and comfortable for months at a time.

While the algae yield oxygen and trap carbon dioxide, the rats do exactly the reverse. 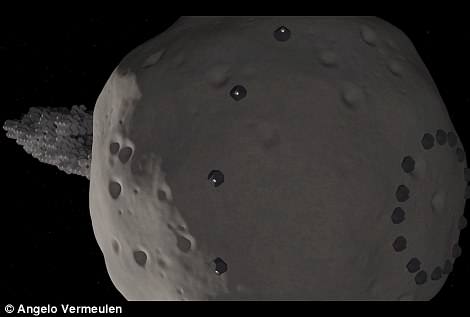 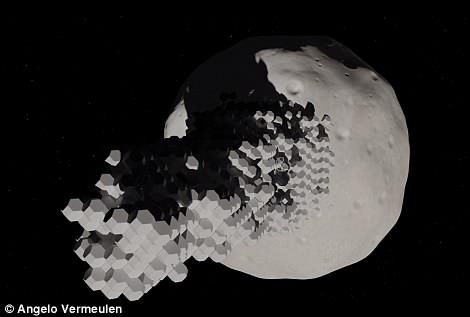 According to a video of the system in action, dozens of rockets would be attached to the asteroid, allowing operators to propel it and control its direction

The bioreactor with oxygen-producing algae was recently demonstrated on the International Space Station.

‘The MELiSSA concept gives the starship its baseline life support,’ said Angelo, a biologist and artist who in 2013 served as crew commander of the NASA HI-SEAS Mars simulation base in Hawaii.

‘Meanwhile, we’re also integrating other technologies such as 3D printing and asteroid mining into our design.’

Next month the team will present the first version of their starship-scale MELiSSA computer simulation at the AgroSpace-MELiSSA workshop in Rome.

The project involves deploying thousands of tiny spacecraft to travel to our nearest star system and send back pictures.

If successful, scientists could determine if Alpha Centauri, a star system about 25 trillion miles away, contains an Earth-like planet.

The catch: It could take years to develop the project, dubbed Breakthrough Starshot, and there is no guarantee it will work.

The small light-propelled vehicles will carry equipment like cameras and communication equipment.