Time to grab the telescope! Huge asteroid that is twice the size of the Empire State Building will race by Earth at 43,000 miles per hour TONIGHT

Amateur astronomers may be able to catch a glimpse of an asteroid twice the size of the Empire State Building when passes Earth at 43,000 miles per hour tonight.

It is estimated to be 3,451 feet (1.052km) in diameter, much larger than the tallest building on earth, the Burj Khalifa in Dubai, which measures 2,722 feet.

Asteroid 7482 (1994 PC1) will safely pass within 1.2 million miles of Earth — around five times farther away from the planet than the moon.

Tonight marks the closest the asteroid has been to our planet since 1933, when it was 699,000 miles away.

While 7482 (1994 PC1) is unlikely to be visible with the naked eye tonight, amateur astronomers may be able to see it in the constellation Pisces using a small backyard telescope, according to EarthSky.

After its close approach on Tuesday, 7482 (1994 PC1) won’t be this close to Earth again until the year 2105, according to NASA JPL-Caltech’s Solar System Dynamics.

The massive asteroid, more than twice the size of the Empire State Building in New York, will come within 1.2 million miles of the Earth 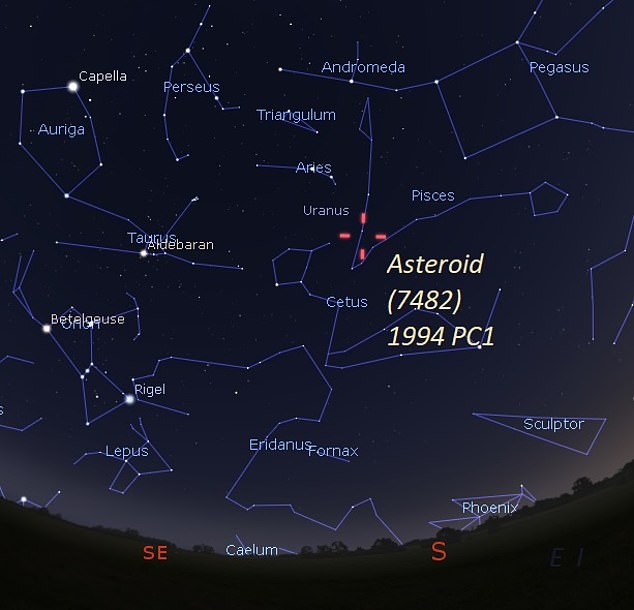 It was spotted by RH McNaught using the Siding observatory in Australia.

It orbits the Sun every 572 days, although has an eccentric orbit taking it from 0.9 to 1.8 AU from the star.

One AU is the distance between the Earth and the Sun.

Asteroid 7482 (1994 PC1), which orbits the sun every 1.5 years, was first discovered in 1994 by astronomer RH McNaught using the Siding Spring Observatory in New South Wales, Australia.

Its orbit is very well known, according to astronomers, and varies from 0.9 AU to 1.8 AU, where 1 AU is the distance between the Earth and the sun.

It is a common stony S-type asteroid, and every close approach gives astronomers the chance to study the surface and learn more about these ancient space rocks.

NASA and other agencies regularly track more than 28,000 known asteroids as they orbit the Sun, and occasionally cross Earth’s orbit.

NASA says none of the known asteroids are expected to collide with the Earth at any point in the near future, but there are asteroids whose orbits aren’t known.

Asteroids and other space objects are being monitored by NASA’s Center for Near Earth Object Studies.  It defines 7482 (1994 PC1) as a near-Earth object (NEO) and a potentially hazardous asteroid (PHA). 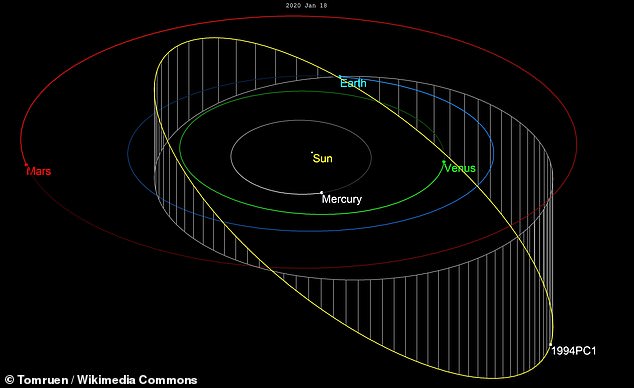 Asteroid 7482 (1994 PC1) orbits the Sun every 1.5 years. Its orbit is depicted here in relation to the planets in our Solar System

If the object is larger than 460 feet (140 meters) across, it is considered a potentially hazardous object (PHO).

‘NEOs are comets and asteroids that have been nudged by the gravitational attraction of nearby planets into orbits that allow them to enter the Earth’s neighbourhood,’ said NASA.

‘Composed mostly of water ice with embedded dust particles, comets originally formed in the cold outer planetary system while most of the rocky asteroids formed in the warmer inner solar system between the orbits of Mars and Jupiter.

‘The scientific interest in comets and asteroids is due largely to their status as the relatively unchanged remnant debris from the solar system formation process some 4.6 billion years ago.’

According to publicly available NASA data, there have been 27,948 NEOs discovered, as of Tuesday.

And there are also an estimated 1,000 NEOs larger than 3,280 feet (one kilometre), highlighting the need to keep track of these space rocks.

On average, Earth is hit by a football pitch-sized rock every 5,000 years, and a civilisation-ending asteroid every one million years, according to NASA’s Near-Earth Object Program.

In an attempt to tackle the threat of asteroids that may one day get a little too close for comfort, NASA formed a planetary defence program, that includes the Double Asteroid Redirection Test (DART) mission, that launched in November.

DART was launched on a SpaceX Falcon 9 rocket and will see the probe deliberately crash head first into the surface of an asteroid in October this year,

Then, using Earth-based telescopes to measure the effects of the impact on the asteroid system, the mission will enhance modelling and predictive capabilities to help us better prepare for an actual asteroid threat should one ever be discovered.

The DART technique could prove useful for altering the course of an asteroid years or decades before it bears down on Earth with the potential for catastrophe.

DART will smash into Dimorphos, which orbits a larger asteroid called Didymos, at 13,500 miles per hour (21,700 km per hour). Dimorphos is depicted here to scale with Rome’s Colosseum

A small nudge ‘would add up to a big change in its future position, and then the asteroid and the Earth wouldn’t be on a collision course,’ NASA said.

Scientists constantly search for asteroids and plot their courses to determine whether they could hit the planet.

‘Although there isn’t a currently known asteroid that’s on an impact course with the Earth, we do know that there is a large population of near-Earth asteroids out there,’ said Lindley Johnson, NASA’s planetary defense officer.

Deflecting an asteroid such as Bennu, which has a small chance of hitting Earth in about a century and a half, could require multiple small impacts from some sort of massive human-made deflection device, according to experts.

Scientists in California have been firing projectiles at meteorites to simulate the best methods of altering the course of an asteroid so that it wouldn’t hit Earth.

According to the results so far, an asteroid like Bennu that is rich in carbon could need several small bumps to charge its course.

Bennu, which is about a third of a mile wide, has a slightly greater chance of hitting Earth than previously thought, NASA revealed.

The space agency upgraded the risk of Bennu impacting Earth at some point over the next 300 years to one in 1,750.

Bennu also has a one-in-2,700 chance of hitting Earth on the afternoon of September 24, 2182, according to the NASA study.

Scientists have been seriously considering how to stop an asteroid from ever hitting Earth since the 1960s, but previous approaches have generally involved theories on how to blow the cosmic object into thousands of pieces.

The problem with this is these pieces could potentially zoom towards Earth and present almost as dangerous and humanity-threatening an issue as the original asteroid.

A more recent approach, called kinetic impact deflection (KID), involves firing something into space that more gently bumps the asteroid off course, away from Earth, while keeping it intact.

Recent KID efforts were outlined at the 84th annual meeting of the Meteoritical Society held in Chicago and led by Dr George Flynn, a physicist at State University of New York, Plattsburgh.

‘You might have to use multiple impacts,’ Dr Flynn said in conversation with The New York Times. ‘It [Bennu] may barely miss, but barely missing is enough.’

Researchers have been working at NASA’s Ames Vertical Gun Range, built in the 1960s during the Apollo era and based at Moffett Federal Airfield in California’s Silicon Valley, for the recent KID experiments.

The team used 32 meteorites – which are fragments of asteroids that have fallen to Earth from space – that were mostly purchased from private dealers.

The tests have allowed them to work out at what point momentum from a human-made object fired towards an asteroid turns it into thousands of fragments, rather than knocking it off course as desired.

‘If you break it into pieces, some of those pieces may still be on a collision course with Earth,’ Dr Flynn said.

Carbonaceous chondrite (C-type) asteroids, such as Bennu, are the most common in the solar system.

They are darker than other asteroids due to the presence of carbon and are some of the most ancient objects in the solar system – dating back to its birth.

According to the findings from experiments at AVGR, the type of asteroid being targeted (and how much carbon it has in it) may dictate how much momentum would be directed at it from any human-made KID device.

‘[C-type] asteroids are much more difficult to deflect without disruption than ordinary chondrite asteroids,’ the experts concluded.

‘These results indicate multiple successive impacts may be required to deflect rather than disrupt asteroids, particularly carbonaceous asteroids.’

Therefore, around 160 years in the future – when Bennu is most likely to collide with Earth, according to NASA – a KID device would have to give it a series of gentle nudges to prevent it from breaking up and sending dangerous splinter fragments flying towards Earth.

NASA’s recent study about Bennu, published in the journal Icarus, did point out there is more than a 99.9 per cent probability Bennu will not smash into Earth over the next three centuries.

‘Although the chances of it hitting Earth are very low, Bennu remains one of the two most hazardous known asteroids in our solar system, along with another asteroid called 1950 DA,’ NASA said in a statement.