Human consciousness is created by the brain’s ‘energy field’ which comes from the electric signals of the organ’s neurons, claims scientist

A professor of neuroscience at the University of Surrey claims to have solved the long-standing mystery of what creates human consciousness.

According to Dr Johnjoe McFadden, the electromagnetic field produced by the brain’s neurons is what produces this uniquely human trait.

Vast amounts of research has gone into deciphering why we have the ability to know we think, whereas other animals do not.

Previous attempts to understand this have included the spiritual and supernatural, including suggesting it comes from a soul. 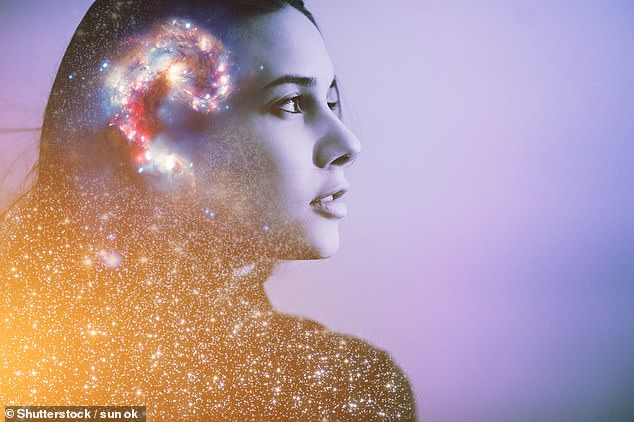 According to Professor Johnjoe McFadden, the electromagnetic field produced by the brains neurons is what produces human consciousness

But Professor McFadden is basing his theory, published in the journal Neuroscience of Consciousness, on well-known scientific fact.

‘How brain matter becomes aware and manages to think is a mystery that has been pondered by philosophers, theologians, mystics and ordinary people for millennia,’ he says.

‘I believe this mystery has now been solved, and that consciousness is the experience of nerves plugging into the brain’s self-generated electromagnetic field to drive what we call “free will” and our voluntary actions.’

Much of the brain’s function remains a mystery but scientists do know that messages are passed around by tiny electrical signals via specialised cells called neurons.

As a result, the brain creates a small electromagnetic field, also an established fact.

It is routinely detected by brain-scanning techniques such as electroencephalogram (EEG) and magnetoencephalography (MEG) but has been dismissed as irrelevant.

But Professor McFadden believes it is far from irrelevant and is instead the answer to one of the most enduring riddles in science.

In his article, he explains that this field is created by the very messages which constitute a person, a byproduct of every thought, movement and process.

As a result, he suggests, it is the very core of what constitutes consciousness, driving free will and all voluntary actions.

It remains purely theoretical and it is currently completely unknown as to how this could be proved.

However, Professor McFadden is bullish about the potential of his theory, saying it could lead to the development of consciousness in robots.

Consciousness is everything you experience.

But it remains one of the great mysteries of science.

Its existence is irrefutable as every human can attest to it.

However, it is exceptionally difficult to prove or quantify.

Consciousness encompasses everything it is to exist and be human.

There are seven theories as to what makes consciousness a thing focusing on two major aspects, a so-called easy problem and a hard problem.

The easy problem is the underlying biological processes which control perception,  memory and attention.

The problem is hotly debated. Even its existence is a topic of disquiet among academics.

This is trying to explain why there is a subjective, first person aspect of consciousness.

For example, why does banging our funny bone hurt? Why do our bodies not simply register the bodily damage?

This question is exactly what science struggles with.

bra, consciousness, human, is, the
You may also like: