Illegal sale of exotic pets is on the rise across Facebook

The Facebook groups fueling the exotic pet trade: Wildlife watchdog uncovers pages from Thailand with over 1,500 animals for sale, including endangered species

A wildlife monitoring group says research it has conducted since 2016 has found a sharp increase in the number of people belonging to Facebook groups in Thailand where endangered animals are bought and sold.

The monitoring network TRAFFIC said its researchers found 1,521 animals for sale online in 12 Facebook groups in Thailand in less than a month of monitoring in 2016.

Follow-up research on the same 12 groups showed that at least nine were still active in July this year, with one becoming secret, and their overall membership had increased to 203,445 from 106,111. 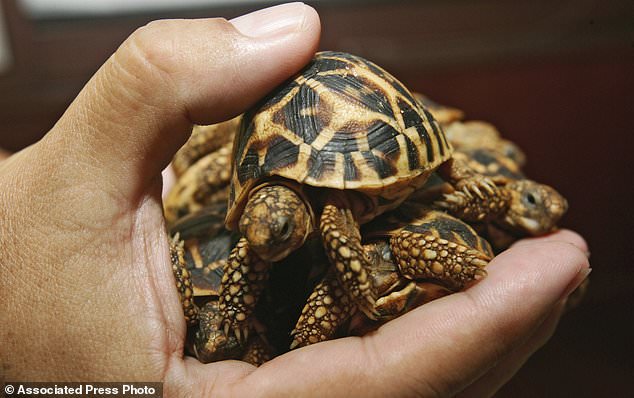 TRAFFIC, a wildlife monitoring group, says research it has conducted since 2016 has found that people are increasingly buying and selling endangered animals on Facebook groups in Thailand

Maethinee Phassaraudomsak, data and research officer for TRAFFIC in Thailand, said in an email Monday that the monitoring ‘shows how easy it is to carry out this business and market wildlife publicly while staying anonymous and out of reach of authorities.’

A new report by the group shows screenshots of exotic animals advertised for sale on Facebook.

In one example, an unidentified user posted a picture of a rare hornbill bird with a caption saying ‘a baby rhinoceros hornbill is available for purchase. Interested buyers, please contact by Facebook private message.’

The report said the vast majority of animals offered in the online wildlife trade were juveniles, prized for pets.

The illegal wildlife trade is not new to Thailand, where wildlife seizures are often announced by authorities.

In 2013, Thailand was considered to have the largest unregulated elephant ivory market in the world but it has since instituted new laws to deal with the problem.

TRAFFIC said its research found 200 different species offered for sale online and 95 of those, mostly reptiles, were not protected by Thai law because they are not native to the country.

WHAT IS THE GLOBAL COALITION TO END WILDLIFE TRAFFICKING ONLINE?

The world’s most endangered species are under threat from an unexpected source, the Internet, according to the World Wildlife Fund.

Advances in technology and connectivity across the world, combined with rising buying power and demand for illegal wildlife products, have increased the ease of exchange from poacher to consumer.

As a result, an unregulated online market allows criminals to sell illegally obtained wildlife products across the globe.

To counter this, the world’s biggest e-commerce, technology, and social media companies have joined forces to shut down online marketplaces for wildlife traffickers.

The Global Coalition to End Wildlife Trafficking Online brings together companies from across the world in partnership with wildlife experts at WWF and Traffic, the wildlife trade monitoring network, as well as the International Fund for Animal Welfare.

This industry-wide approach aims to reduce wildlife trafficking online by 80 per cent by 2020.

WWF and partners are collaborating with tech companies across continents, including eBay, Google, Microsoft and Tencent, to unite the industry and maximise impact for reducing wildlife trafficking online.

It said animals such as the black pond turtle that are not native to Thailand and therefore not protected by Thai law frequently turn up in wildlife seizures in the country and region.

‘Giving such species protection under Thailand’s law and enabling enforcers to take action is the strongest way to address this critical conservation problem,’ Kanitha said.

The TRAFFIC report recommended that ‘Thai authorities should establish a close working relationship with Facebook and develop joint strategies to tackle this problem.’

Facebook said in an emailed response to an AP request for comment that ‘Facebook does not allow the sale or trade of endangered species or their parts, and we remove this material as soon as we are aware of it.

We are committed to working with TRAFFIC and law enforcement authorities to help tackle the illegal online trade of wildlife in Thailand.’