Nasa has released mesmerising footage of what a storm looks like from space.

These remarkable meteorological events form when intense updrafts of wind drag clouds up into the stratosphere where they collide with the raging stratospheric jet-stream.

The plumes have a dramatic impact on storm severity, with AACPs generating 14 times more severe weather events per storm than those that do not have plumes.

In addition, 86 per cent of reports of hailstones larger than two inches (five cm) came from plume producing storms.

Hail from storms is a particularly costly side-effect, causing $1.7 billion (£1.3bn) in damage in the US in 2017 — more than the combined cost from lightning, tornadoes and thunderstorms combined.

Analysis of the plumes could be used to help predict the most severe weather conditions as the images appeared up to 30 minutes before a storm started.

‘You have wind flows exceeding 100 miles an hour at the jet-stream level running into this towering updraft,’ said Kris Bedka, an atmospheric scientist at NASA’s Langley Research Center in Hampton, Virginia.

‘So jet-stream winds are forced to go around.’

The colouration of the image is created based on temperature and shows the U-shaped areas of cold temperatures in blue.

Warmer plumes, which are represented by yellow tints, are visible travelling downstream.

According to Mr Bedka, who studied the images alongside experts from the University of Oklahoma, says the images show the severity of the storms.

‘The plume pattern in the imagery instantly tells you without the need for radar or lightning observations or other information that these are the storms you really, really need to look out for,’ Mr Bedka said.

The plumes and the storms have been a common sight in the US over the summer as tumultuous air patterns has caused bouts of extreme weather.

The Midwest has been affected particularly badly, with high winds, hail and tornadoes all created as a result of the vast plumes.

‘Plume signatures are not only useful for identifying potentially severe storms, but they also represent transport of ice and water vapour into the stratosphere,’ said Elisa Murillo, a graduate student at the University of Oklahoma.

‘Water vapour is a powerful greenhouse gas, and its presence in the stratosphere has strong impacts on climate.’

The plumes are normally a good indicator of a powerful storm as the conditions that create them are unique.

Typical thunderstorms top out at the tropopause,  the boundary between the troposphere — the lowest part of Earth’s atmosphere — and the stratosphere, according to Nasa.

This means that storm clouds, known as cumulonimbus clouds, reach this limit and flatten out, producing an anvil-like appearance. 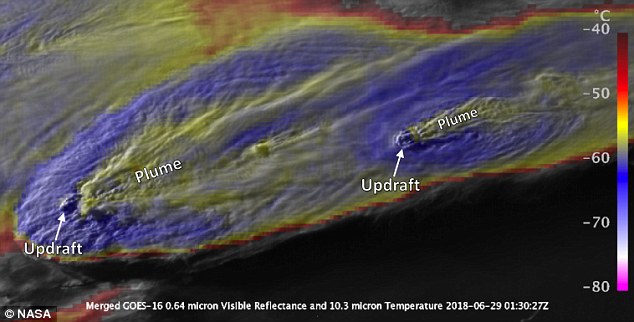 The colouration of this image is created based on temperature and shows the U-shaped areas of cold temperatures in blue. Warmer plumes, which are represented by yellow tints, are visible travelling downstream

However, in the case of an AACP, the tops of these clouds are sucked through this barrier by severe uplifts of wind.

This breach of the tropopause creates a portal for more wind and cloud to soar upwards, where it encounters the rapidly moving jet stream.

‘You have wind flows exceeding 100 miles an hour at the jet-stream level running into this towering updraft,’ said Mr Bedka.

‘So jet-stream winds are forced to go around.’

The mixing of the air currents causes a ripple effect as ice in cirrus clouds is sent downstream and forms the plume.

Plumes are typically warmer than the underlying anvil cloud because they mix with the air in the stratosphere where temperature warms with height. 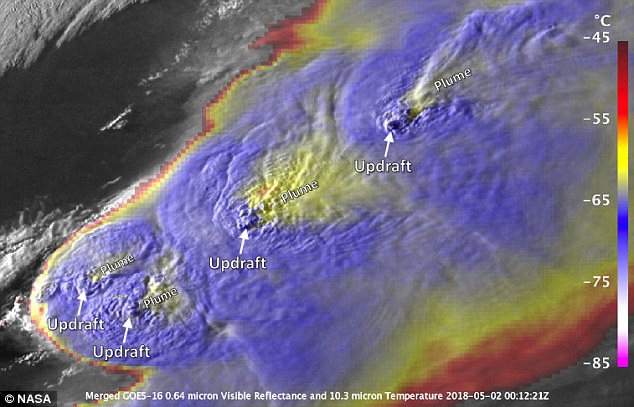 This photo shows the ‘Above Anvil Cirrus Plume’ – or AACP – emanating out of a large North Dakota storm that produced baseball-sized hail. The plumes are normally a good indicator of a powerful storm as the conditions that create them are unique

The satellites took images at one minute intervals and the experts then tracked their origin, how long they lasted and when they dispersed.

They then compared these images to reports of extreme weather and any warnings issued by the National Weather Service (NWS).

The researchers revealed the footage could be used in future to help warn people a severe storm is about to breakout.

‘In about 100 of them you had a plume appearing 10 minutes before the first warning, potentially providing additional lead time for saving lives and property.’

In a few instances, the window between plume detection and the start of a storm was as much as 30 minutes, which could provide valuable time for people in the path of the destructive storm to get out of harms way.