Viagra of the mind: Injection of a hormone found in CHOCOLATE could boost men’s sex drive and improve their performance between the sheets

An injection of a hormone found in chocolate could boost men’s sex drive and improve their performance between the sheets, a study has found.

Researchers found that the chemical made men more aroused when they were exposed to the smell of perfume or images of women’s faces.

The hormone, kisspeptin — dubbed the ‘Viagra of the mind’ — is a naturally occurring chemical that stimulates the release of other reproductive hormones.

It was named in recognition of its discovery at Pennsylvania State University, the town where US brand Hershey’s chocolate ‘kisses’ are made.

Researchers hope that a simple jab with kisspeptin may one day help the sexual boost performance of those suffering from a low sex drive. 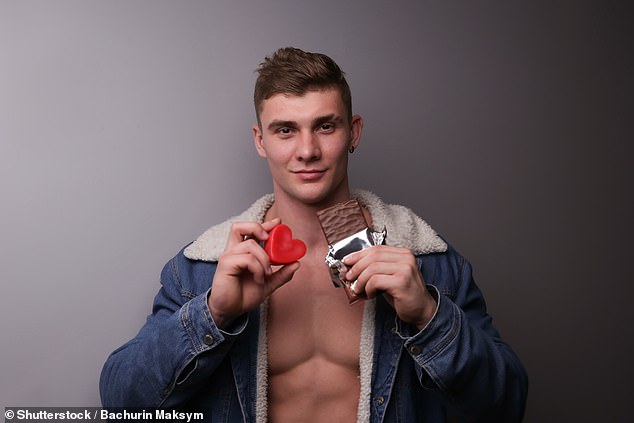 An injection of a hormone found in chocolate could boost men’s sex drive and improve their performance between the sheets, a study has found

‘Psychosexual disorders have a major detrimental impact on wellbeing and can be highly distressing not only to those affected but also their partners,’ said paper author and endocrinologist Alexander Comninos, of Imperial College London

‘Despite the high numbers of people with these disorders,there are currently limited treatment options,’ he added.

‘Our study shows that kisspeptin can boost brain activity related to attraction and, intriguingly, this boosting effect is even greater in men with a low sexual quality of life.”

Up to one in three men suffer from sexual problems — such as low desire — which are psychological in nature rather than physical.

These can harm both relationships and fertility.

One of the most common issues is a loss of libido, or sex drive, which is often linked to personal issues, stress or tiredness.

Waning libido can also be a sign of an underlying medical problem, such as having reduced hormone levels.

Despite how frequently low sex drive occurs in the population, there are few treatments available as not much is known about the brain processes that underlie it. 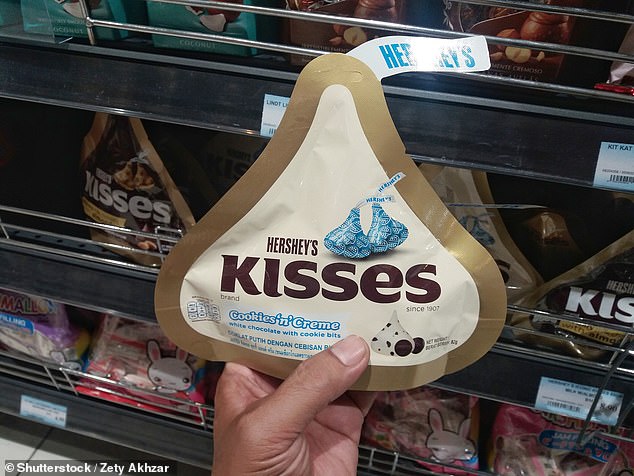 Kisspeptin was named in recognition of its discovery at Pennsylvania State University, the town where US brand Hershey’s Chocolate Kisses are made

In their study, Dr Comninos and colleagues gave magnetic resonance imaging (MRI) brain scans to 33 heterosexual men aged between 18–34 as they smelt a popular fragrance and viewed pictures of women’s faces.

The scent — Chanel No. 5 — has previously been shown to be associated with sexual arousal.

The researchers wanted to see whether kisspeptin can be used to stimulate regions in the brain that govern attraction in young healthy men with a normal libido.

They found that, when given kisspeptin rather than a placebo, activity in the participants’ brains’ attraction pathways was enhanced, both when smelling the perfume and when viewing the women’s faces.

They also found that — when viewing the faces — kisspeptin had a greater effect on attraction pathways in men who had lower sexual quality of life.

The team are now hoping to perform the first clinical trials in patients who have been diagnosed with low libido.

They had previously shown that kisspeptin enhances how the body processes sexual arousal. The latest results highlight its impact on grey matter and attraction — a fundamental process that can lead to arousal and sexual activity.

‘This builds on our previous work that identified a role for kisspeptin in sexual arousal,’ said Dr Comninos.

‘Now we have found kisspeptin may actually enhance the processing of smell and facial attraction, which are often the first steps to sexual arousal.’

‘We hope our growing understanding of how kisspeptin boosts parts of the brain involved in attraction and arousal can ultimately lead to new ways of treating people affected. However, we still have a long way to go.’

‘Attraction is usually the first step to sexual arousal and it’s encouraging to see that kisspeptin can also boost brain activity relating to this,’ added paper co-author and endocrinologist Waljit Dhillo.

‘This new finding helps us further understand the brain activity of people with psychosexual disorders, which could lead to therapeutic targets.’

The team plan to carry out further studies to explore this possibility — and note that the discovery could also lead to better treatments for stress and depression.

The full findings of the study were published in the journal JCI Insight.

Erectile dysfunction, also known as impotence, is when a man is unable to get or maintain an erection.

It is more common in the over-40s but affects men of all ages.

Failure to stay erect is usually due to tiredness, stress, anxiety or alcohol, and is not a cause for concern.

However, it can be a sign of an underlying medical condition such as high blood pressure or cholesterol, side effects of medication, or hormonal issues.

Lifestyle factors than can affect the condition include obesity, smoking, cycling too much, drinking too much, and stress.

a, found, hormone', I, injection, of
You may also like: