Injection that promotes blood clotting could save accident victims

‘Vaccine against trauma death’: Injecting a drug that promotes blood clotting at the scene of the injury could save thousands of accident victims’ lives

The lives of thousands of accident victims could be saved by injecting a common drug that helps stop bleeding at the scene of the incident, a study has found.

Experts from the UK and France found that an injection of tranexamic acid reduces traumatic injury death rates by up to a third — if administered within an hour.

The team proved that the drug can be successfully administered as an intramuscular injection — like a ‘flu jab — rather than the traditional intravenous line.

The finding may be of most benefit in low- and middle- income nations, the team said, where first responders are less likely to be trained to set up intravenous lines.

In fact, these countries see more that 90 per cent of the world’s trauma deaths — around 80 per cent of which occur before the patient even arrives at hospital. 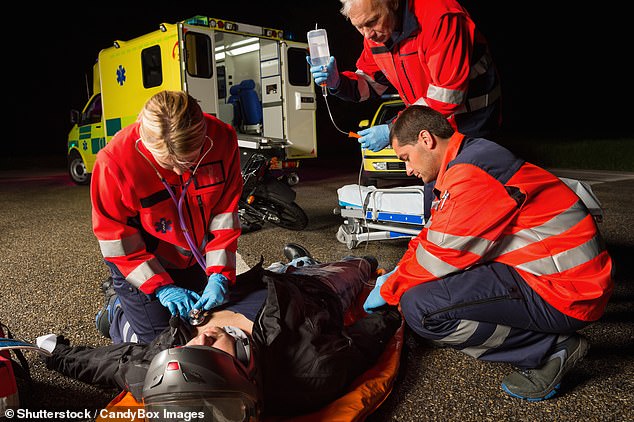 The lives of thousands of accident victims could be saved by injecting a common drug that helps stop bleeding at the scene of the incident, a study has found (stock image)

‘Intramuscular tranexamic acid is like a vaccine against trauma death,’ paper author and epidemiologist Ian Roberts of the London School of Hygiene and Tropical Medicine told the Times.

‘An urgent injection of tranexamic acid is life-saving after serious injury. but patients are not being treated fast enough,’ he added.

‘A rapid intramuscular injection given by first responders or paramedics could mean the difference between life and death.’

Tranexamic acid is already used to stabilise trauma patients — but it is traditionally administered by an intravenous line — which takes longer to set up and work.

‘At the moment in the NHS tranexamic acid is used but patients aren’t getting it quick enough. It’s most effective when given within an hour of injury, and the hours just disappear so quickly,’ Professor Roberts told the Times.

‘It takes time for the ambulance to arrive, time for paramedics to orientate themselves to what’s going on. It takes a little time to put in an intravenous line — sometimes they just say, well, let’s leave that for the hospital.’

‘This way, you can just inject it intramuscularly and forget about it.’

Every quarter-hour delay a patient experiences in getting tranexamic acid reduces the drug’s lifesaving potential by around 10 per cent, Professor Roberts explained — adding that only 3 per cent of UK trauma victims receive it within one hour. 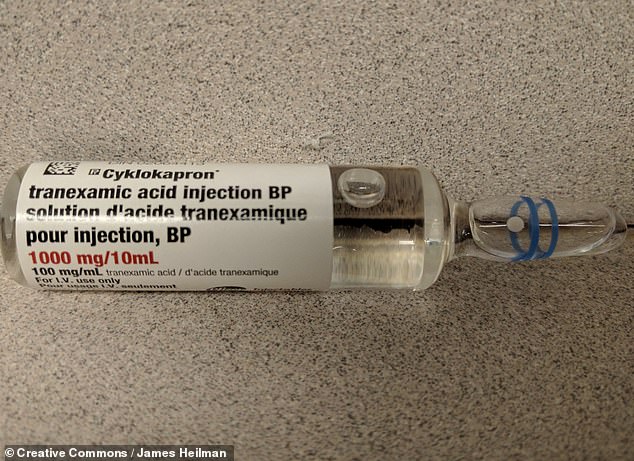 Experts from the UK and France found that an injection of tranexamic acid, pictured, reduces traumatic injury death rates by up to a third — if administered within an hour (stock image)

In their study, Professor Roberts and colleagues treated 30 bleeding trauma patients who had been presented at London-based hospitals.

Each of the patients were given their first dose of tranexamic acid intravenously — but the second was administered by intramuscular injection.

The team found that the drug was rapidly absorbed from the muscles into the patients’ bloodstream — reaching the required level within under 15 minutes in all cases — with no local side-effects except for some redness and swelling.

‘I think we can start using it this way immediately,’ Professor Roberts told the Times.

‘If you could just get to the scene of an injury — somebody lying on the floor by the road, or at the foot of a ladder — you just do the basics, sort out airway, breathing.’

‘Then you could very quickly give an injection of the intramuscular dose of tranexamic acid — and it’s absorbed into the blood so quickly that you get therapeutic effect really, really quickly.’

The team is also collaborating with the British Armed Forces to develop a tranexamic acid auto-injector — which would function much like a allergy sufferers’ EpiPen — and could also be administered to the wounded on battlefields.

‘A simple auto injector device that could be used by lay first responders or police officers — before the ambulance arrives — could save thousands of lives each year,’ Professor Roberts told the Times.

‘It could also be used by wounded soldiers either on themselves or a buddy.’

The full findings of the study were published in the journal British Journal of Anaesthesia.