Iron Age warrior buried with a sword, scabbard and SPEAR after his death 2,000 years ago is unearthed by builders in West Sussex

An Iron Age warrior who lived 2,000 years ago has been unearthed in West Sussex, surrounded by his weapons.

Builders working on 175 new homes on the outskirts of Walberton, near Chichester stumbled across the remains and archaeologists were drafted in to study the grave.

Experts found an iron sword in a highly-decorated scabbard and a spear in the grave.

The grave of the warrior contained a sheathed sword and a spear as well as the remains of a wooden container, preserved as a dark stain, probably used to lower the individual into the grave (pictured) 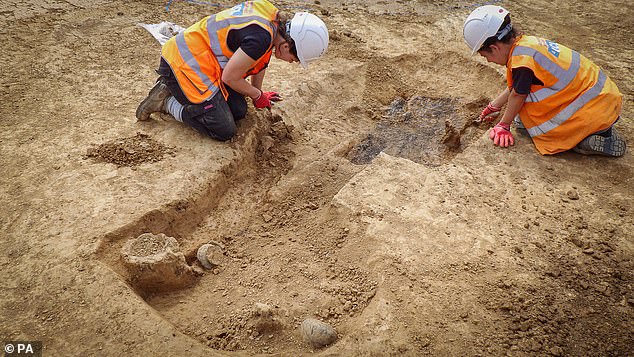 An Iron Age warrior who lived 2,000 years ago has been unearthed in West Sussex surrounded by his weapons

The team that made the discovery were from Archaeology South-East (ASE), the commercial branch of UCL’s Institute of Archaeology.

ASE archaeologist Jim Stevenson, who is managing the post-excavation investigations into the burial, said: ‘There has been much discussion generally as to who the people buried in the ‘warrior’ tradition may have been in life.

‘Were they really warriors, or just buried with the trappings of one?

‘Although the soil conditions destroyed the skeleton, the items discovered within the grave suggest that the occupant had been an important individual.’

The grave dates back to the late Iron Age/early Roman period (first century BC to AD50).

X-rays and initial conservation of the sword and scabbard reveal detailed copper-alloy decoration at the scabbard mouth, which would have been highly visible when the sword was worn in life.

Dotted lines on the X-ray may be the remains of a studded garment worn by the occupant when buried.

This is particularly exciting for the archaeologists, as evidence of clothing rarely survives.

The grave also held the remains of a wooden container, preserved as a dark stain, probably used to lower the individual into the grave.

Four ceramic vessels were placed outside this container, but still within the grave.

The vessels are jars made from local clays and would usually have been used for food preparation, cooking and storage.

It is likely that they were placed in the grave as containers for funerary offerings, perhaps intended to provide sustenance for the deceased in the afterlife.

Archaeologists are continuing to investigate this new discovery and hope to find out more about the identity and social status of the individual, and the local area and landscape around that time.

WHAT DO WE KNOW ABOUT IRON AGE BRITAIN?

The Iron Age in Britain started around 800BC and finished in 43AD when the Bronze Age began.

As suggested by the name, this period saw large scale changes thanks to the introduction of iron working technology.

During this period the population of Britain probably exceeded one million.

This was made possible by new forms of farming, such as the introduction of new varieties of barley and wheat.

The invention of the iron-tipped plough made cultivating crops in heavy clay soils possible for the first time.

Some of the major advances during included the introduction of the potter’s wheel, the lathe (used for woodworking) and rotary quern for grinding grain.

There are nearly 3,000 Iron Age hill forts in the UK. Some were used as permanent settlements, others were used as sites for gatherings, trade and religious activities.

At the time most people were living in small farmsteads with extended families.

The standard house was a roundhouse, made of timber or stone with a thatch or turf roof.

Burial practices were varied but it seems most people were disposed of by ‘excarnation’ – meaning they were left deliberately exposed.

There are also some bog bodies preserved from this period, which show evidence of violent deaths in the form of ritual and sacrificial killing.

Towards the end of this period there was increasing Roman influence from the western Mediterranean and southern France.

It seems that before the Roman conquest of England in 43AD they had already established connections with lots of tribes and could have exerted a degree of political influence.

After 43AD all of Wales and England below Hadrian’s Wall became part of the Roman empire, while Iron Age life in Scotland and Ireland continued for longer.

Age, buried, Iron, S, warrior, With
You may also like: