Follow
Home » Science » Iron brew! First beer created in the UK is discovered back to 400BC

Iron brew! First beer created in the UK is discovered back to 400BC

Iron brew! ‘First beer made in the UK’ dates back to 400BC and is found by archaeologists who unearthed charred remnants of an ancient brewery

Proof of Britain’s first ever beer is found by archaeologists clearing a patch of land between Cambridge and Huntingdon for a new road.

A team working on a project to widen the A14 discovered charred lumps of residue from the beer-making process, potentially from as early as 400BC.

Evidence that locals had a taste for porridge and bread has also been uncovered during work to upgrade the 21-mile (34km) stretch of the road. 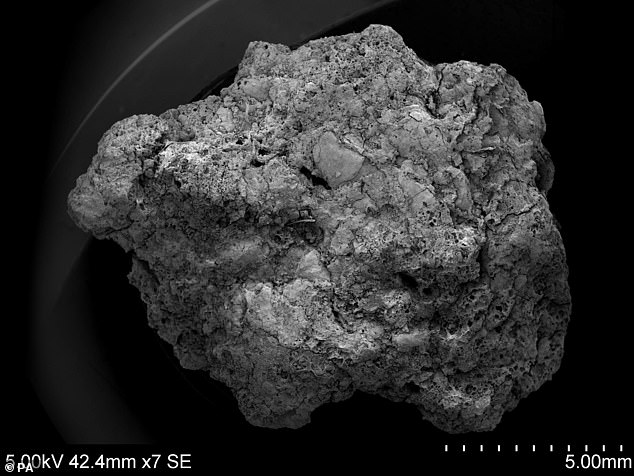 Proof? Fragments of charred residue from a beer-making process, potentially from 400BC

Dr Steve Sherlock, Highways England archaeology on the the A14 project, said: ‘It’s a well-known fact that ancient populations used the beer-making process to purify water and create a safe source of hydration, but this is potentially the earliest physical evidence of that process taking place in the UK.’

Lara Gonzalez, who is one of around 250 archaeologists on the project led by MOLA Headland Infrastructure, made the discovery.

‘I knew when I looked at these tiny fragments under the microscope that I had something special,’ she said.

‘The microstructure of these remains had clearly changed through the fermentation process and air bubbles typical of those formed in the boiling and mashing process of brewing.

‘It’s like looking for a needle in a haystack but, as an archaeobotanist, it’s incredibly exciting to identify remains of this significance and to play a part in uncovering the fascinating history of the Cambridgeshire landscape.

‘The porous structures of these fragments are quite similar to bread, but through microscopic study, it’s possible to see that this residue is from the beer-making process as it shows evidence of fermentation and contains larger pieces of cracked grains and bran but no fine flour.’

She hopes further analysis into the brewing fermentation process will reveal more. 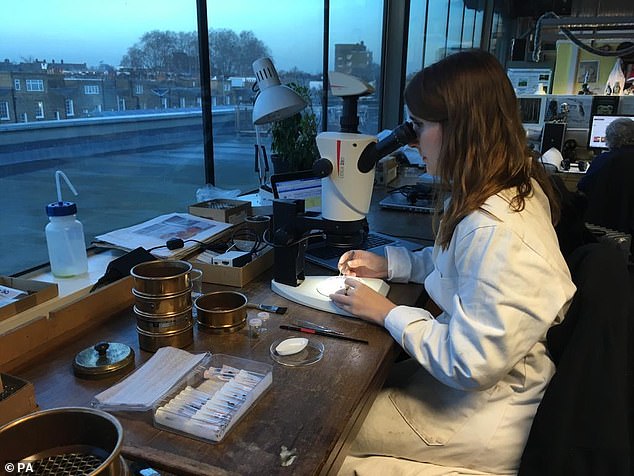 Cheers to that! Lara Gonzalez (pictured) made the discovery of what is believed to be evidence of the first beer brewed in the UK

Beer expert Roger Protz, former editor of the Campaign for Real Ale’s Good Beer Guide, said: ‘East Anglia has always been of great importance to brewing as a result of the quality of the barley that grows there.

‘It’s known as maritime barley and is prized throughout the world. ‘When the Romans invaded Britain they found the local tribes brewing a type of beer called curmi.’

He said this was probably made from grain, and that hops were not used in Britain until the 15th century.

Workers on the A14 project have already uncovered a woolly mammoth tusk, an abandoned medieval village, and several prehistoric burial grounds.

The upgraded road is due to open to traffic by December 2020.

WHEN DID HUMANS START DRINKING BEER?

Humans have had a long history of consuming alcohol.

It is believed the primitive cultures of Mesopotania could have been brewing malted barley scraps as far back as 10,000BC but there are no records of it.

The earliest proof of beer-drinking dates back to Northern China 9,000 years ago.

This ancient brew was made using hawthorn fruit, Chinese wild grapes, rice and honey, and is the oldest known fermented beverage in history – older even than wine.

The earliest proof of beer-drinking dates back to Northern China 9,000 years ago

To make it the corn was milled and moistened in the maker’s mouth to convert starches in the corn into fermentable sugars – before it was ‘spat’ into the beer.

Throughout history, the consumption of alcohol may have helped people become more creative, advancing the development of language, art and religion.

This is because alcohol lowers inhibitions and makes people feel more spiritual.

It is believed the Egyptians started brewing beer around 5,000BC, according to the papyrus scrolls.

They were brewing things like dates, pomegranates and other indigenous herbs.

At around 3150 BC, the Egyptians used industrial-scale breweries to provide beer for the workers who built the pyramids of Giza.

Eventually beer made its way from the Middle East to Europe where an abundance of barley crops provided lots of raw ingredient for brewers.

Experts have now found evidence of brewing in Greece during the Bronze Age.

Researchers believe that these prehistoric people enjoyed getting merry with alcoholic drinks for feasts all year-round and not just when the grapes were ripe.

Not only was it considered nutritional it was also a safe alternative to drinking water.

It was in the Middle Ages that malted barley became the main source of fermented sugar and beer became the beverage we are familiar with today.