The first astronauts arrived on the International Space Station 20 years ago today, marking the start of two decades of continuous human presence in low-Earth orbit.

Construction of the £75 billion ($100 billion) space station began in 1998, with the launch of the first module, named Zarya, on a Russian Proton rocket from Baikonur.

NASA’s Bill Shepherd and Russian cosmonauts Yuri Gidzenko and Sergei Krikalev were the first to step foot on the station on 2 November 2000, after arriving on a Soyuz capsule from Kazakhstan.

Since then, humans have permanently occupied the 420-tonne space station, with 240 men and women setting up camp over the last two decades.

The astronauts are whizzing around the Earth 254 miles up at 17,000 miles per hour in a football field-sized station for anything up to a year at a time.

Astronauts from around the world have done stints there, including Tim Peake, who became the first official British astronaut on the ISS in December 2015. 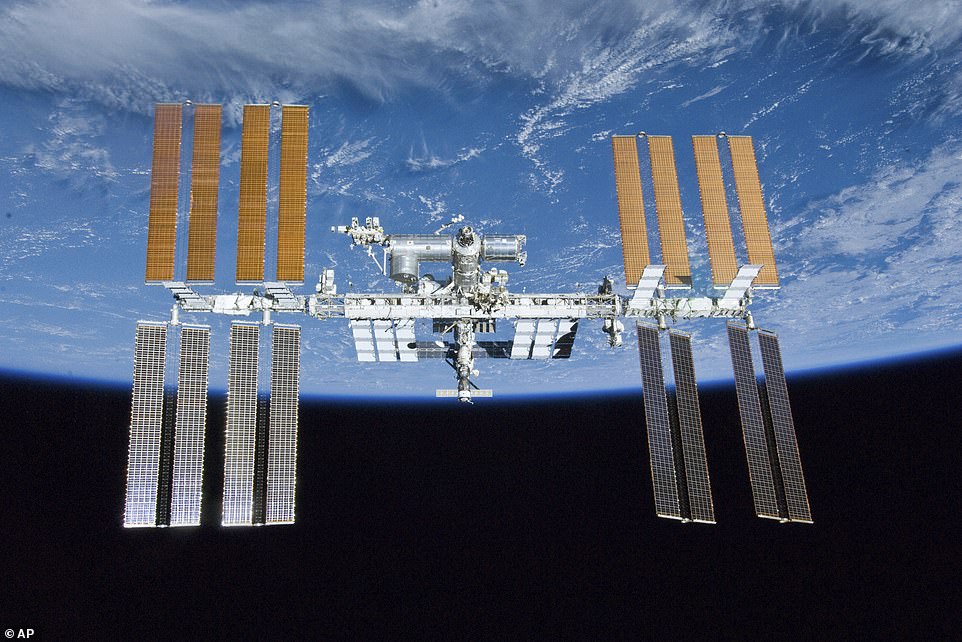 The first astronauts arrived on the International Space Station 20 years ago today, marking the start of two decades of continuous human presence in low-Earth orbit

Previous British astronauts who have headed to the space station have either had US citizenship and worked for Nasa, or been privately funded or sponsored.

The first crew on the station was named Expedition 1, today the crew onboard the orbiting laboratory is part of Expedition 64.

Two days later, they docked with the ISS to begin uninterrupted operations leading to the establishment of the world-class laboratory in space.

Libby Jackson, who is the human exploration programme manager at the UK Space Agency, said having an orbiting space lab is something ‘you can’t put a price on’. 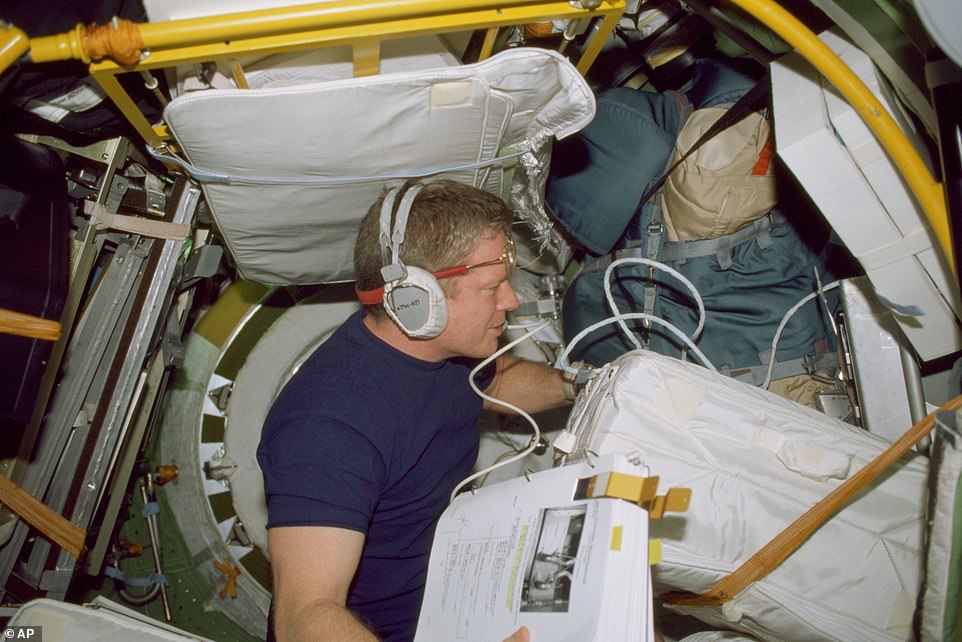 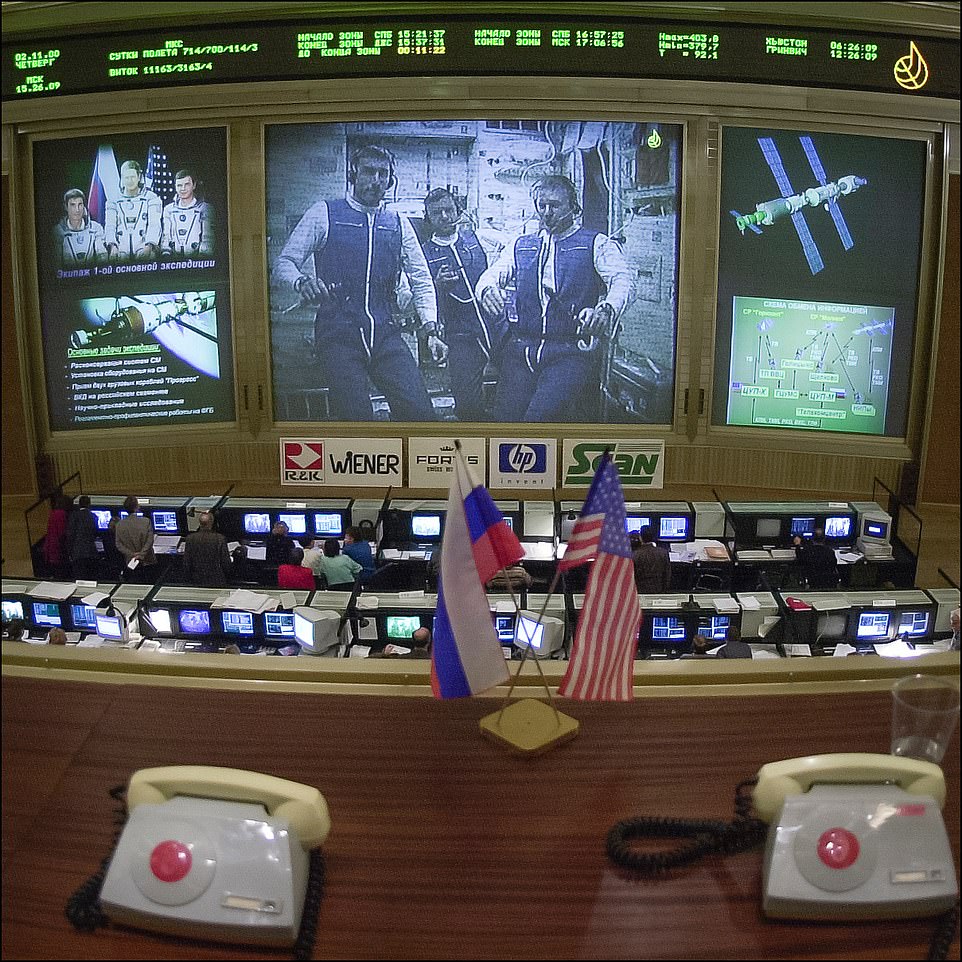 Shepherd, Gidzenko and Krikalevcan be seen on the screen on the ISS from this control centre picture showing the Russian and US flags in the foreground

She said: ‘It is a unique scientific laboratory and the science that we are doing on the space station cannot be done anywhere else on Earth.’

At the time of the first Expedition, the space station was a small orbiting complex of just three modules.

Today it is a sprawling research complex that is as large as a five-bedroom home with a gym, two bathrooms and a 360-degree bay window looking at Earth below.

Around 250 scientific investigations are conducted on the station at any given time, and an astronaut’s usual stay aboard the orbiting laboratory is six-months.

‘There’s kids now who are in college who, for their entire lives, we’ve been living off the planet,’ Kenny Todd, NASA’s deputy program manager for the ISS told National Geographic. ‘When I was a kid, that was all stuff that was just dreams.’

The station serves as a test bed for innovative technologies like recycling waste plastic and carbon dioxide filtration that are critical for long-duration missions on the lunar surface as part of the Artemis program.

Crew member safety also is important for lunar missions, so data collected from bone scans and eye exams helps inform what happens to the human body in space.

State-of-the-art facilities on board station help NASA increase understanding of what it will take to expand human exploration beyond low-Earth orbit.

Ms Jackson said: ‘There have been over 2,775 different experiments (conducted in the space station) involving more than 100 countries.

‘We have been looking at how cells change, how humans change and how materials change in space. 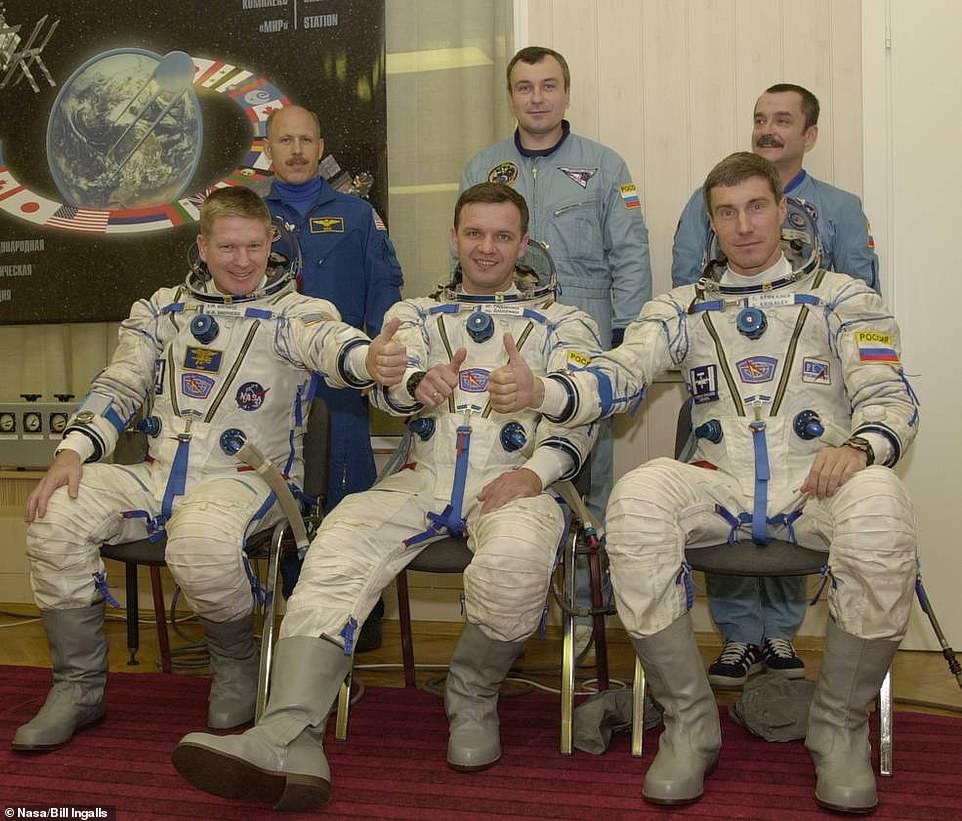 ‘All of these things are answering questions that are of benefit to everybody on Earth.’

Nearly 100,000 people worked together to design, build, launch and operate the station from the mid-1980s to today.

‘When you compare the station to the procession of great structures and buildings built by humanity since the dawn of civilization, it’s up there with the Pyramids, the Acropolis—all the great structures and edifices,’ David Dixon, who worked on ISS designs for NASA in the 1980s, told National Geographic.

It hasn’t always been plain sailing, with suspected air leaks taking months to fix, a 2.5 foot tear in one of the solar panels that required a risky spacewalk and failed resupply missions coming from Earth are among some of the issues facing ISS crew. 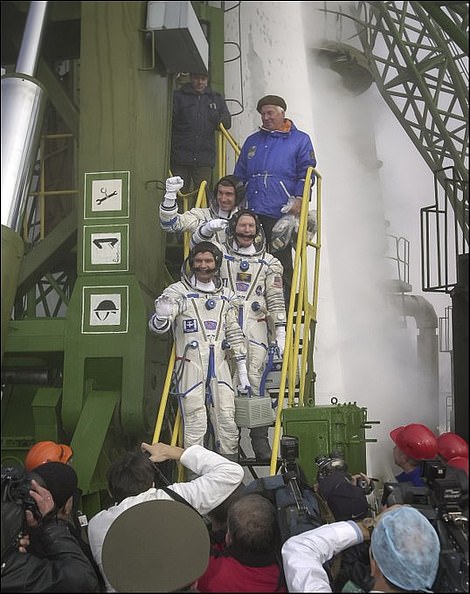 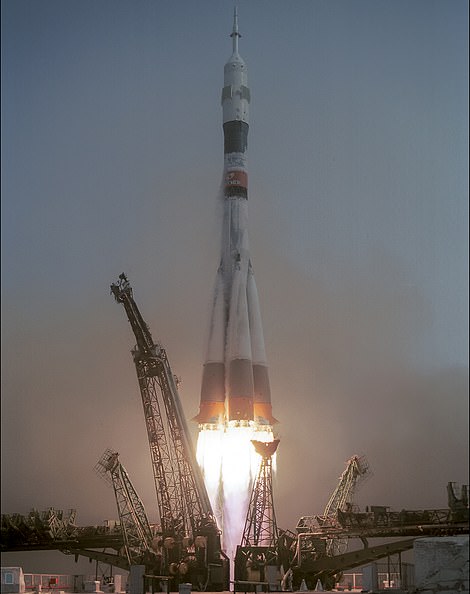 The space shuttle disasters of 1986 and 2003 that resulted in 14 deaths on the Challenger and Colombia also slowed construction of the station.

Around four billion US dollars (£3 billion) a year is spent on maintenance costs and service flights, leading to questions over the future of the space station.

The ISS includes contributions from 15 nations including the UK and members of the European Space Agency, who send astronauts and experiments.

However, given the extensive running costs, the bulk of which is provided by NASA, different sources of revenue could be needed in future. 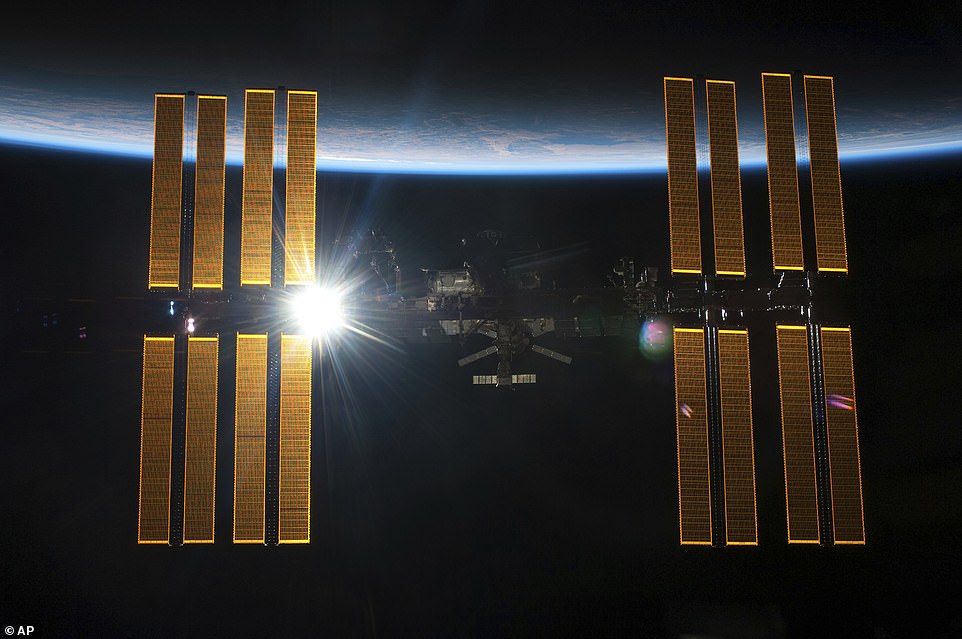 Construction of the £75 billion ($100 billion) space station began in 1998, with the launch of the first module, named Zarya on a Russian Proton rocket from Baikonur

It has travelled more than 120,000 orbits of the Earth – or about 3.3 billion miles – since it first launched but despite that, and a few issues, it is going strong.

The US space agency has indicated it plans to end support in the near future as it focuses on lunar and Mars trips as part of the Artemis mission.

NASA plans to put the first woman and next man on the Moon by 2024 and part of the wider mission will see a space station built in orbit around the Moon.

Ms Jackson said she is hopeful that private companies will step in to run the International Space Station on a commercial basis in future.

One such company includes Texas-based Axiom Space, which recently signed a deal with Tom Cruise’s production agency to send the actor to space along with film director Doug Liman. 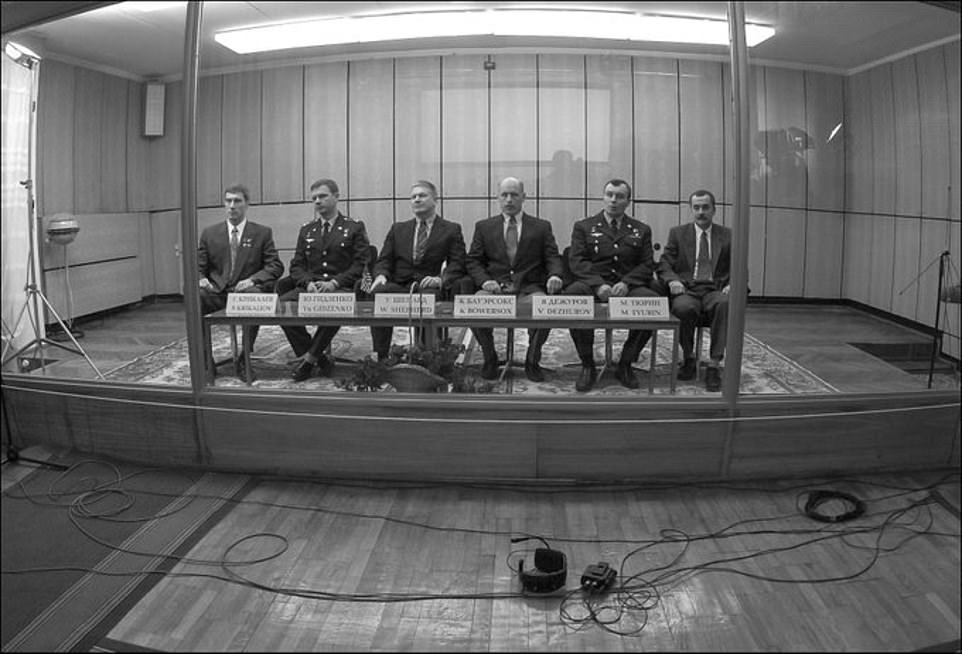 Other aspects of operations to the ISS have already become commercial, with Elon Musk’s SpaceX ferrying astronauts to the station, and other firms such as Northrop Grumman and Boeing taking cargo to the orbiting laboratory.

Caroline Harper, who is head of space science at the UK Space Agency, said she hopes the international co-operation that led to the ISS will continue with future human explorations, including the Moon and Mars.

She said: ‘(Even when) politics on the ground is not great, it has been wonderful to see all that co-operation going on up there on the space station.

‘International co-operation is a huge factor and I don’t think the academics will want to let go of that.’

The European Space Agency and others are working with NASA on the Lunar Gateway space station and other aspects of the Artemis mission, which in future could see European astronauts land on the Moon.

November 20, 1998 – The International Space Station is born as the first module, called Zarya, launches into low-Earth orbit from Baikonur Cosmodrome in Kazakhstan on board a Russian Proton rocket.

November 2, 2000 – Continuous occupation of the International Space Station begins as Nasa astronaut Bill Shepherd and cosmonauts Yuri Gidzenko and Sergei Krikalev become the first crew to live on board the ISS.

February 7, 2001 – Destiny, the US Laboratory module, becomes part of the station. It continues to be the primary research laboratory for US payloads.

April 28, 2001 – US multimillionaire Dennis Tito boards a Soyuz rocket bound for the ISS, becoming the first private citizen to go to space. Mr Tito spent 20 million US dollars (£15m) on the flight and a six-day stay aboard the space station. Since then, there have been six other space tourists.

February 7, 2008 – The European Space Agency’s Columbus laboratory heads to the ISS aboard Space Shuttle Atlantis. It is the ESA’s largest single contribution to the space station and the first permanent European research facility in space.

December 7, 2009 – The first-ever monarch butterflies in space take flight on the ISS, allowing students on Earth to compare their life cycle to butterflies raised in terra firma.

2011 The main construction of the ISS is complete, although modifications still continue to the present day. It is about 109 metres long and weighs 420 tonnes. The station consists of eight solar arrays generating about 84 to 120 kilowatts average power.

May 22, 2012 – The first commercial cargo ship completes a successful test flight to dock with the ISS. The SpaceX Dragon capsule carries 1,200 pounds of supplies for the crew and experiments designed by students.

November 7, 2013 – Russian cosmonauts Oleg Kotov and Sergey Ryazanskiy perform a hand-off of the Olympic torch ahead of a six-hour spacewalk, which later makes its way to the 2014 Olympics in Sochi, Russia.

December 15, 2015 – Tim Peake becomes became the first official British astronaut to join the ISS crew. Previous British astronauts who have headed to the space station have either had US citizenship and worked for Nasa, or been privately funded or sponsored.

October 18, 2019 – The first ever all-female spacewalk takes place, with US astronauts Christina Koch and Jessica Meir venturing out into the vacuum to replace a battery unit on the Port 6 truss structure.

May 30, 2020 – SpaceX makes history by becoming the first private company to send humans into orbit. US astronauts Robert Behnken and Douglas Hurley travel to the ISS on the Crew Dragon capsule after blasting off on a Falcon 9 rocket.

conti, decades, hails, ISS, of, two
You may also like: