Jupiter is flinging space rocks at the Earth ‘like a sniper’ – NOT sucking up or deflecting dangerous debris, physicist claims

Jupiter’s huge bulk and crushing gravitational pull is firing space rocks towards Earth like a slingshot, a leading physicist claims.

Most scientists believe Jupiter — the largest planet in the Solar System — helps protect the worlds closer to the sun, such as Earth, and acts as a planetary shield.

But leading physicist Dr Kevin Grazier says this theory has been ‘laid to rest’ and claims it also acts as a celestial ‘sniper’ — with Earth firmly in its cross-hairs.

His research claims the gas giant is more likely to hurl rocks towards the Sun and its orbiting rocky planets than it is to suck them up or deflect them away.

The academic says that while Jupiter may protect Earth from some space missiles, it also redirects those that would otherwise pass harmlessly by. 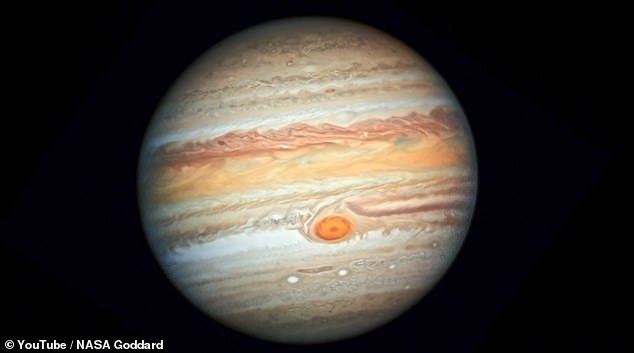 The Jupiter shield theory claims the huge planet, which has a mass more than 300 times greater than Earth’s, sucks in any passing asteroids or comets.

But computer simulations conducted conducted by Dr Grazier revealed in a series of books reveal this to be false.

Dr Grazier told Gizmodo: ‘I wouldn’t say that it’s in jeopardy—I would say that it has been laid to rest.

‘Our simulations show that Jupiter is just as likely to send comets at Earth as deflect them away, and we’ve seen that in the real solar system.’

A series of papers, including one titled ‘Jupiter as a Sniper Rather Than a Shield’, led him to his most recent endeavour — understanding how Jupiter flings debris towards Earth.

Work conducted in association with NASA’s Jet Propulsion Laboratory and the University of Southern Queensland provided evidence that Jupiter is, in fact, a shield and a sniper.

Jonti Horner, an astronomer at the University of Southern Queensland, told Gizmodo: ‘It takes things that threaten Earth and flings them away, clearing space near our planet.

‘So in that sense, it is something of a shield.

‘On the flip side, though, it takes things that come nowhere near Earth and flings them our way, meaning it is also a threat.

‘To find out which side is more important—to determine whether Jupiter is truly friend or foe—you need to look at the story in some detail.’

WHAT IS NASA’S JUNO MISSION TO JUPITER?

The Juno probe reached Jupiter in 2016 after a five-year, 1.8 billion-mile journey from Earth

Following a successful braking manoeuvre, it entered into a long polar orbit flying to within 3,100 miles (5,000 km) of the planet’s swirling cloud tops.

The probe skimmed to within just 2,600 miles (4,200 km) of the planet’s clouds once a fortnight – too close to provide global coverage in a single image.

No previous spacecraft has orbited so close to Jupiter, although two others have been sent plunging to their destruction through its atmosphere.

The maelstrom of high energy particles travelling at nearly the speed of light is the harshest radiation environment in the Solar System.

To cope with the conditions, the spacecraft was protected with special radiation-hardened wiring and sensor shielding.

Its all-important ‘brain’ – the spacecraft’s flight computer – was housed in an armoured vault made of titanium and weighing almost 400 pounds (172kg).

The craft is expected to study the composition of the planet’s atmosphere until 2021.

comets, hurling, is, jupiter, towa
You may also like: