Laughter really is the best medicine! Chuckling with friends reduces the risk of disability by more than 30 per cent in over-65s, study claims

It’s known as the best medicine, but laughter really can help our health – as long as we’re laughing with friends, a new study suggests.

Sharing a laugh with a good mate reduces the risk of cognitive or physical disability by over 30 per cent for people aged 65 and over, researchers have found.

This was in comparison to people of the same age who laughed alone, such as when they were watching TV with no-one for company.

While the reason for the findings remains unclear, researchers suggest that laughing with friends may improve our immune functions, which in turn can reduce the risk of disability. 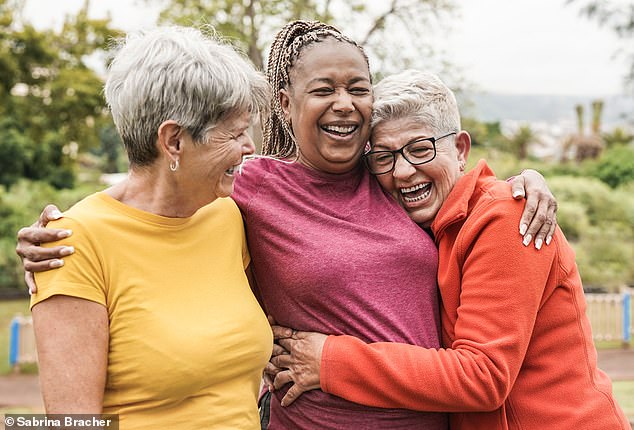 Laughter is the best medicine: Sharing a joke with friends reduces the risk of disability by over 30 per cent, according to the study (stock image)

WHAT IS FUNCTIONAL DISABILITY?

Functional disability has been defined as acquired difficulty in performing basic everyday tasks or more complex tasks needed for independent living, either due to cognitive or physical impairment.

Disabilities in old age are common occurrences affecting the functionality and thus compromising the ability to carry out the activities of daily living.

According to a 2022 study,  laughing with friends can reduce the risk of functional disability developing.

Laughing with friends reduced the risk of functional disability by more than 30 per cent in people 65 and over.

The study, published in Preventive Medicine, aimed to examine the link between laughter in daily life and the onset of ‘functional disability’ among people in Japan.

So far, the potential health benefits of laughing in daily life have rarely been explored.

To learn more, Tamada and colleagues turned to the Japan Gerontological Evaluation Study (JGES), which was established in 2010 with the aim of examining the factors associated with the health and well-being in adults aged 65 and above.

The researchers used data from 12,571 ‘physically and cognitively independent’ participants – 46.1 per cent male – from JGES, who all returned completed surveys on their laughter habits.

That’s because both babies and chimps chuckle while inhaling and exhaling, unlike adult humans who laugh mainly during exhalation, researchers have discovered.

The breathy, squeaky sound may happen because, like apes, babies do not have great control of their vocal tracts, so laugh as they inhale.

But as we age, our laughter becomes less chimp-like and more human.

During an average follow-up period of 6.3 years, 1,420 (11.3 per cent) of participants developed functional disability.

After adjusting for potential confounders such as alcohol intake, participants who laughed with others reduced their risk of functional disability by 30 per cent, the team found.

Similarly, the number of situations to laugh with others was inversely associated with the risk of functional disability.

‘Having more situations to laugh with others or at least the situation to laugh with friends might contribute to reducing the risk of functional disability later in life,’ the team say in their paper.

How exactly laughter helps improve our health is still unknown, although the suspected mechanisms underlying the health benefits of laughter are thought to be stress relief and improvement of immune functions.

The team admit that their study cannot clearly conclude that laughter itself can prevent the onset of functional disability, and so further research is needed to accurately identify causality.

In recent years, a growing number of studies have focused on the link between laughter in daily life and several health outcomes.

For example, in 2016, Japanese researchers established a link between more laughter and prevalence of heart disease.

While in 2020, incidence of cardiovascular disease were found to be significantly higher among subjects with a low frequency of laughter.

And in 2021, infrequent laughter was linked with long-term blood pressure increases among middle-aged men.

YOU’RE HAVING A LAUGH! DUTCH AND JAPANESE PEOPLE CAN DETECT IF A PERSON IS FROM THE SAME COUNTRY AS THEM BASED ON THE SOUND OF THEIR CHUCKLES, STUDY FINDS

Both Dutch and Japanese people can recognise their fellow countrymen by listening to the sound of their laughter alone, a 2021 study found.

Researchers recorded the sounds of different types of laughter produced by volunteers from both Japan and the Netherlands.

They then played these clips to a total of 404 Dutch and Japanese participants, who were able to tell if the laughter belonged to the same cultural group as them.

Spontaneous (rather than forced) laughter was rated as most positive by both groups, but Dutch listeners rated Dutch laughter as being the most positive of all.