Legends of ‘Negrito’ people living in Taiwan CONFIRMED: Skull of woman reveals ‘short, dark-skinned people’ lived on the island more than 6,000 years ago – before indigenous tribes – then suddenly disappeared

The ancient Taiwanese legend of ‘short, dark skinned’ people who lived in remote mountains and suddenly disappeared has been confirmed to be true following the discovery of a ‘Negriot’ woman’s remains in a cave that dates back 6,000 years.

The nation’s indigenous tribes have long shared stories about small stature hunter-gatherers who were already settled when they arrived 4,800 years ago – but a lack of evidence has shrouded this group in mystery for several hundred years.

A DNA analysis on the skull shows it is close to African samples and features of the cranium resemble Negritos of the Philippines and South Africa, who all are well known for their short stature and small body size.

It is still not known what happened to this ancient group, but researchers involved with the study suggest the arrival of the Austronesian peoples could have led to the decline and disappearance of the Negritos in Taiwan. 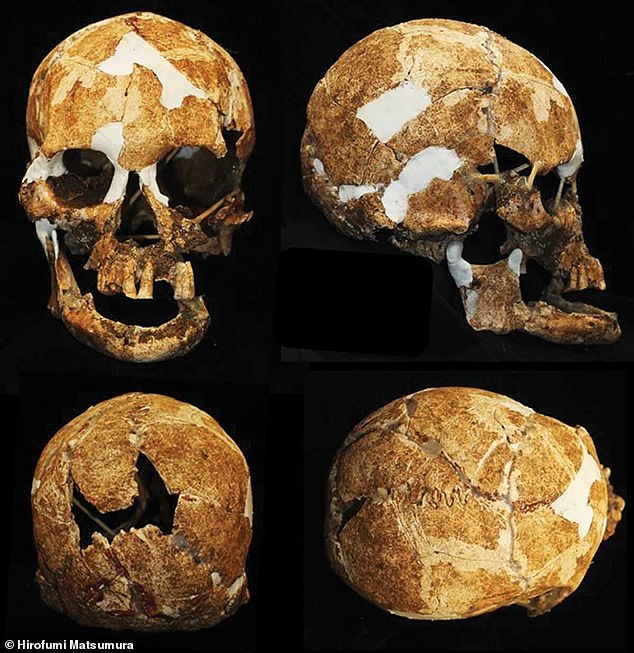 A DNA analysis of the skull shows it is closer to African samples and features of the cranium resemble Negritos of the Philippines and South Africa, who all are well known for their short stature and small body size

‘The term ‘Negrito’, little black person, is a Spanish diminutive of negro, first used by the 16th-century Spanish missionaries to describe the hunter-gatherers in the Philippines,’ reads the study published in World Archeology.

‘As the Negrito groups are characterized by their short stature, dark skin, and frizzy hair, all groups of a similar phenotype in the neighboring region, including the Mani (Maniq) in southern Thailand, the Semang groups in Peninsular Malaysia, and the Andamanese in the Andaman Islands are often labeled together as the Negritos.’

There are 16 recognized Austronesian groups in Taiwan and all but one have similar legends about the Negrito people.

The legends about the apparent ‘Negritos’ of Taiwan were collected during three major cultural periods: the Chinese Qing Dynasty of 1683 to 1895, the Japanese Rule period of 1895 to 1945, and then the post-1945 era. 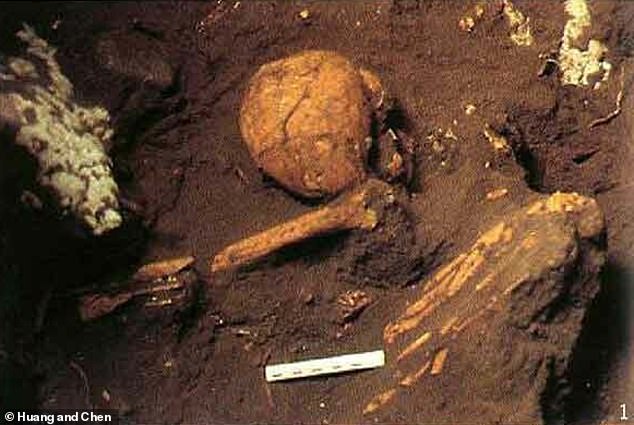 The woman’s remains were found inside a cave and are believed to be at least 6,000 years old

Several documents from the Quin Dynasty have mentioned the existence of ‘small-statured and dark-skinned people’ on the island, noting they spoke a different language and only intermarried among themselves.

During the Japanese period, scholars collected and interpreted the tales about Negrito people through field research among the Austronesian tribes – a total of 25 of these legends in Taiwan were collected.

After 1945, this topic had attracted more attention, and the number of collected stories increased to 258 through linguistic and ethnological field research.

The Austronesian groups, however, varied on opinions about Negritos.

Some of the indigenous tribes viewed them as their ancestors, while others saw them as ‘aliens and enemies,’ the study describes.

One tribe, the Saisiyat, claim they learned medicine, singing, dancing and other rituals from the who they called, Ta’ai.

More than 1,000 years ago, the Saisiyat killed what they believe to be the last village of Negritos in a battle over women – and the tribe still feels the guilt of their ancestors’ actions.

The Saisiyat forced a battle, cornering so many people on a bridge that the entire tribe drowned when warriors tipped it into a fast-flowing mountain river Chu Fung-lu, master of ceremonies for the memorial held in Wufeng Village deep in the mountains of central Taiwan, told Reuters. 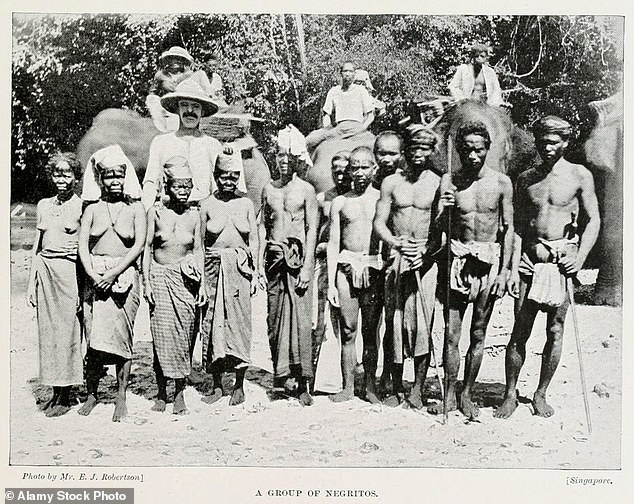 The ancient Taiwanese legend of short, dark skinned people who lived in remote mountains. Pictured is a group of Negritos in Singapore 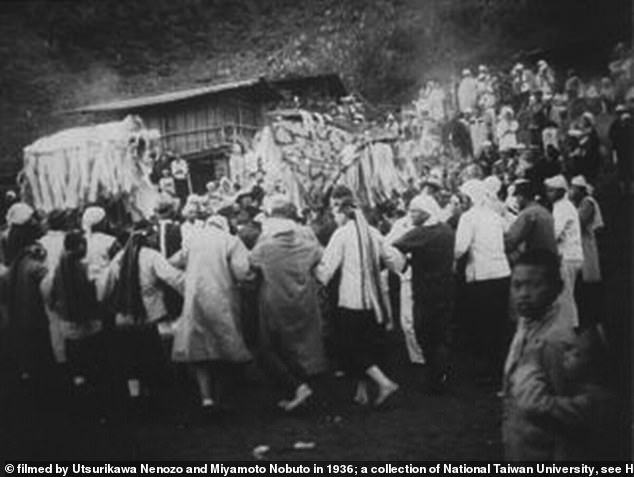 One of Taiwan’s indigenous tribes, the Saisiyat, claim they learned medicine, singing, dancing and other rituals from the who they called, Ta’ai. Here they are performing a dance said to have come from the Negrito group 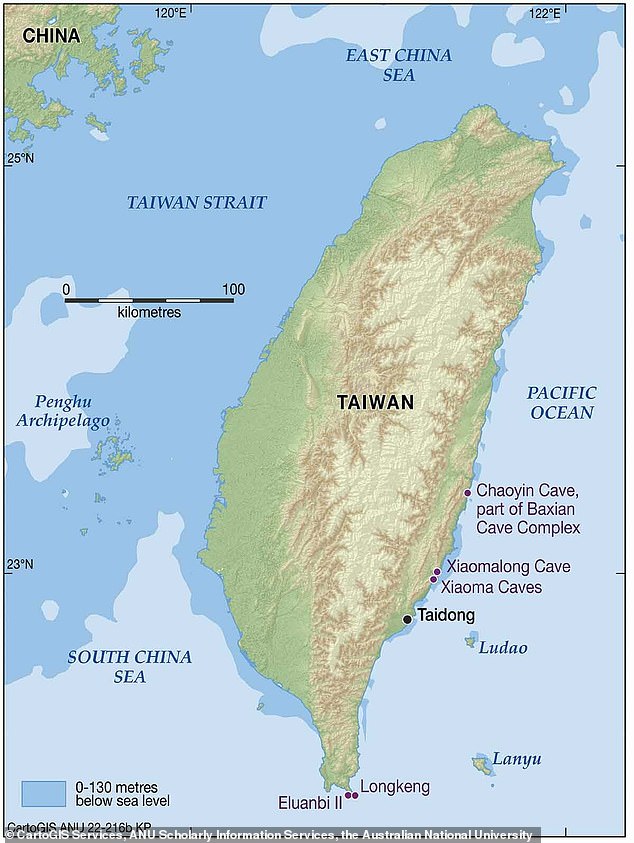 The woman’s remains were found buried inside one of the largest Xiaoma caves that sits on the eastern coastline of the island.

Also in the layers of dirt were deposits of Neolithic pottery-bearing and Iron Age findings that date back between 2,000 and 6,200 years ago.

The position of the woman’s remains suggest she was laid to rest in a squatting position, which matches other methods of hunter-gatherer graves in southern China and Southeast Asia from late Paleolithic (50,000 to 12,000 years ago) through Mesolithic (10,000 to 20,000 years ago) and Preceramic, which began 4,000 years ago.

Archaeologists determined the sex through the skull, as the pelvis was not available to analyze.

‘The individual was ascertained to be female because of the gracile cranium, small mastoid processes, smooth occipital muscle attachment area, perpendicular and elevated frontal bone, and the smooth contour of the mandibular base,’ according to the study.

The Negrito population is believed to be tied to the ‘first layer’ of anatomically modern humans who show a closer resemblance to Africans than present-day Eurasians who represent the ‘second-layer.’