Carbon dioxide levels are still at a record high despite factories closing, planes being grounded and energy use reducing during Covid lockdown, scientists warn

Levels of carbon dioxide in the world’s atmosphere did not dwindle as a result of the widespread cessation of industrial activity throughout 2020, official data shows.

The coronavirus pandemic forced businesses to close, grounded flights and saw people stay at home instead of venturing outside.

As a result, emissions of greenhouse gases, including CO2 and the more potent but less prevalent nitrous oxide and methane, dropped dramatically.

However, the World Meteorological organization (WMO) says this global drop of up to 7.5 per cent is insufficient to impact on the amount of CO2 already trapped in the atmosphere. 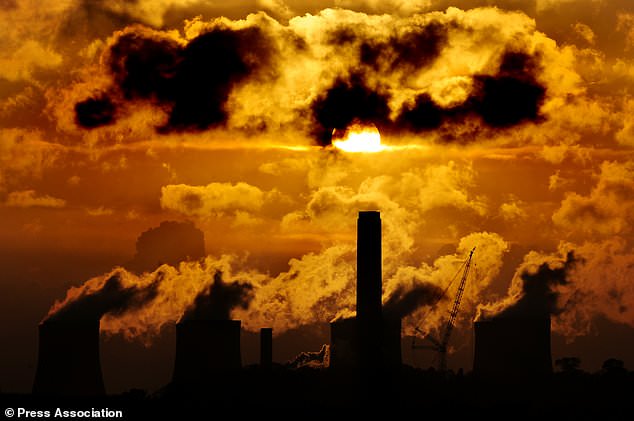 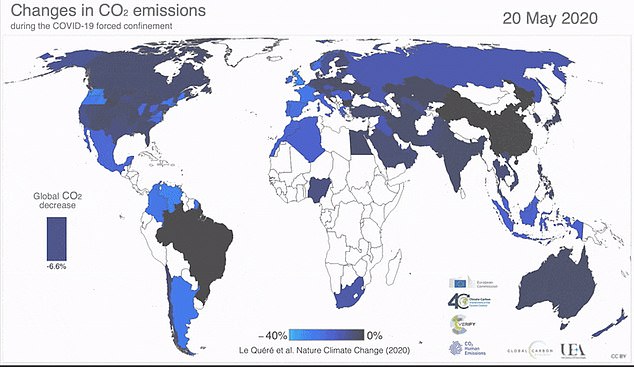 Researchers from the University of East Anglia said earlier this year that the global COVID-19 lockdown has had an ‘extreme’ effect on daily carbon emissions but it is ‘unlikely to last’. This graphic shows the global level of CO2 decrease by the end of May 2020

Levels of methane have surged in recent years and the atmospheric concentration of the greenhouse gas has now reached a record high, a study shows.

Scientists say several human activities are to blame for the soaring levels, including coal mining; oil and gas production; cattle and sheep farming; and landfills.

Stanford University researchers and the Global Carbon Project assessed emissions from 2010 up until 2017, the last year complete data was available.

It found that in 2017 Earth’s atmosphere absorbed nearly 600 million tons of the colourless, odourless gas that is one of the most potent pollutants.

Methane traps almost 30 times more heat than the same amount of carbon dioxide and more than half of all methane emissions now come from human activities.

In 2019, the global average for carbon dioxide concentrations in the atmosphere breached the threshold of 410 parts per million (ppm).

Before the Industrial Revolution, the average amount of CO2 in the atmosphere was around 278ppm, with fossil fuel burning, cement production and deforestation to blame as primary drivers for a 148 per cent spike.

This figure continued to rise in 2020 according to official data from the World Meteorological Organization.

The WMO’s annual greenhouse gas bulletin looked primarily at the amount of greenhouse gases in Earth’s atmosphere as of 2019, before the Covid-19 pandemic broke out, but did include insight from data gathered already in 2020.

Preliminary estimates for this year indicate that as a result of the Covid-19 pandemic, global annual emissions of CO2 fell by between 4.2 per cent and 7.5 per cent.

But these kinds of reductions will not cause the amount of carbon dioxide in the atmosphere to go down, the WMO warned.

Carbon dioxide levels will continue to go up, and while the rate of growth will be slightly reduced by the fall in emissions, it will have no more effect than the changes seen from year to year as a result of natural variability in the system.

Once released into the atmosphere from processes such as burning fossil fuels for power, transport and industry, as well as deforestation and agriculture, greenhouse gases trap heat.

Carbon dioxide, the main greenhouse gas, remains in the atmosphere for centuries, continuing to warm the planet.

‘Carbon dioxide remains in the atmosphere for centuries and in the ocean for even longer,’ said WMO Secretary-General Professor Petteri Taalas.

Widespread use of nitrogen-based fertiliser is jeopardising ambitious climate targets and putting the world at risk of overshooting the Paris Agreement.

It is less prevalent than carbon dioxide, but is 300 times more potent as a contributor to global warming.

The dangerous gas depletes the ozone layer, which protects us from the harmful ultraviolet rays of the sun, and remains in the atmosphere for a century.

A landmark study has found human-induced emissions of the chemical have surged since the 1980s, increasing by 30 per cent over the past four decades.

This figure is increasing every year at a rate of around 1.4 per cent, according to the data.

‘The last time the Earth experienced a comparable concentration of CO2 was 3-5 million years ago, when the temperature was 2-3°C warmer and sea level was 10-20 meters higher than now. But there weren’t 7.7 billion inhabitants.’

In the last ten years, almost half (44 per cent) of all CO2 emitted into the atmosphere stayed there and was not absorbed by either land or sea.

‘We breached the global threshold of 400 parts per million in 2015. And just four years later, we crossed 410 ppm,’ says Professor Taalas.

‘Such a rate of increase has never been seen in the history of our records. The lockdown-related fall in emissions is just a tiny blip on the long-term graph. We need a sustained flattening of the curve.’

Concentrations of methane and nitrous oxide also climbed to new highs in 2019, the annual greenhouse gas bulletin from the WMO showed.

Methane is an extremely potent greenhouse gas which traps almost 30 times more heat as the same amount of carbon dioxide.

Levels of this gas are were measured at an average of 877 parts per billion in 2019, a 260 per cent surge from pre-industrial levels.

Approximately 60 per cent of all methane emissions come from human sources, including livestock, rice farming and landfills.

Nitrous Oxide is less prevalent than carbon dioxide, but is 300 times more potent as a contributor to global warming.

Areas with higher levels of air pollution are more likely to more Covid-19 cases, according to a new study that found a clear link between pollution and the R rate.

Researchers from Washington University in St Louis compared the R rate in US towns and cities with population density and pollution estimates for each location.

They found there was a higher R rate in places with greater levels of PM2.5 – particles of pollution – in the atmosphere compared to areas with a cleaner sky.

The R rate is an indication of how fast Covid-19 is spreading, if it is above one then one person can spread the illness to more than one person.

The authors say someone’s health when they get Covid-19 impacts how ill they become and the same applies to how clean air is and fast the virus spreads.

Rajan Chakrabarty and colleagues examined 43 confounding factors including pollution levels, population density and any stay at home orders in April 2020 across US cities with the highest rate of R.

‘There was a strong, linear association between PM2.5 exposure and R,’ he said.

PM2.5 refers to ambient particles with a diameter of 2.5 micrometers or less; at that size, they can enter a person’s lungs and cause damage.

For this reason, PM2.5 can be detrimental to respiratory health. But how this relates to the spread of COVID-19 through a population had yet to be explored.

at, carbon, dioxide, levels, of, re
You may also like: