Mars has long been touted as a home for alien life, most likely in microbial form, as the Red Planet once had conditions similar to Earth, with an atmosphere and flowing waters. Europa, one of the 79 moons of Jupiter, is another celestial body in our galactic neck of the woods which could home life.

This is because the lunar satellite could contain water beneath its thick icy exterior, which could shield any life from the Sun’s harmful radiation.

Now, one expert has stated that it is almost a certainty life will be found on these two bodies, both of which are a target for NASA.

Professor Monica Grady, professor of Planetary and Space Science at Liverpool Hope University, said: “When it comes to the prospects of life beyond Earth, it’s almost a racing certainty that there’s life beneath the ice on Europa.

“There you’re protected from solar radiation. And that means there’s the possibility of ice remaining in the pores of the rocks, which could act as a source of water. 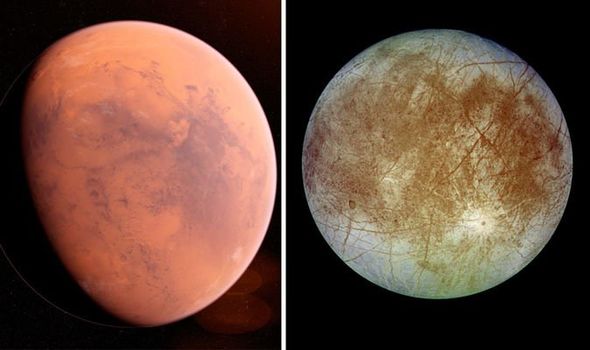 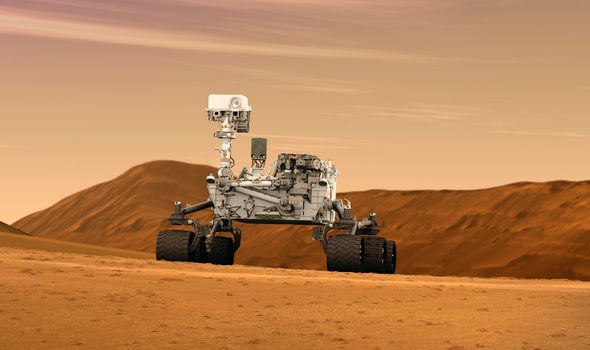 “If there is something on Mars, it’s likely to be very small – bacteria.

“But I think we’ve got a better chance of having slightly higher forms of life on Europa, perhaps similar to the intelligence of an octopus.”

“Our solar system is not a particularly special planetary system, as far as we know, and we still haven’t explored all the stars in the galaxy.

“Humans evolved from little furry mammals that got the opportunity to evolve because the dinosaurs were killed by an asteroid impact. 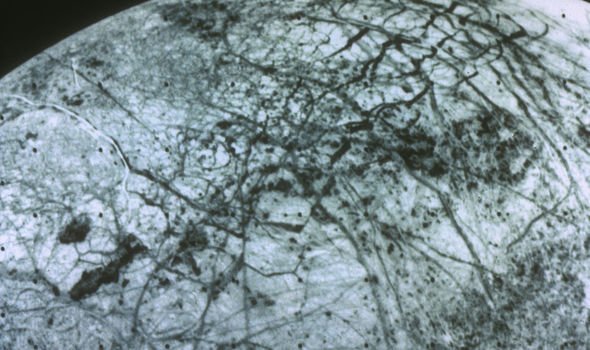 “That is probably not going to happen on every planet – but it’s at least possible based purely on a statistical argument.

“Whether we will ever be able to contact extraterrestrial life is anyone’s guess, purely because the distances are just too huge.

“And as for so-called alien ‘signals’ received from space, there’s been nothing real or credible, I’m afraid.”

NASA has plans to travel to Europa, which is one of 79 moons orbiting Jupiter, between 2023 and 2025 with its Europa Clipper spacecraft.

The Clipper’s primary mission is to perform 40 to 45 flybys, involving surface investigations and high-resolution imaging of the moon. 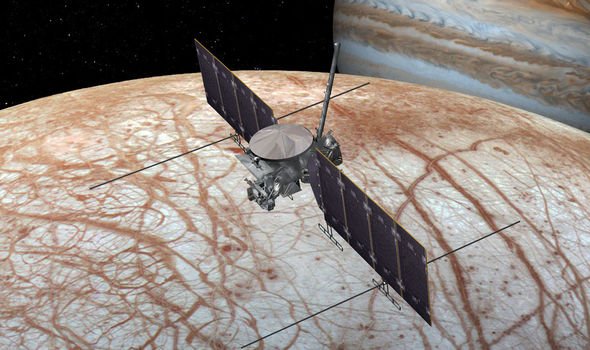 Europa Clipper will have to complete flybys of the moon, rather than orbiting it, due to the danger of radiation from Jupiter fry the machine’s electronics, NASA said.

The spacecraft will be searching for alien life on the moon, which is believed to be an ideal candidate for life.

A statement from NASA said: “The Europa Clipper mission, launching in the 2020s, will be the first dedicated and detailed study of a probable ocean world beyond Earth.

“Jupiter’s moon Europa, slightly smaller than Earth’s Moon, may host a liquid water ocean under its frozen shell, making it a tantalising place to search for signs of life.

“The mission will conduct an in-depth exploration of Jupiter’s moon, Europa, and investigate whether the icy moon could harbour conditions suitable for life, honing our insights into astrobiology.”