The locusts are tearing through crops, devouring entire fields and blotting out the skies when they swarm. The United Nations’ Food and Agriculture Organization (FOA) expects widespread breeding to spawn new waves of locusts in the “coming weeks”.

The worst-affected areas are in Kenya, where locusts swarms are being reported in the northern and central parts of the country.

The locusts, a species known as desert locust, are already mature and have laid their eggs.

As the eggs hatch, the short-horned grasshoppers are likely to spread into neighbouring countries.

FOA said: “The situation remains extremely alarming in the Horn of Africa, especially in Kenya, Ethiopia and Somalia where widespread breeding is in progress and new swarms are expected to form in the coming weeks.

“In the past few days, there has been a significant movement of swarms over the Arabian Peninsula, unrelated to the Horn of Africa, that reached both sides of the Persian Gulf.” 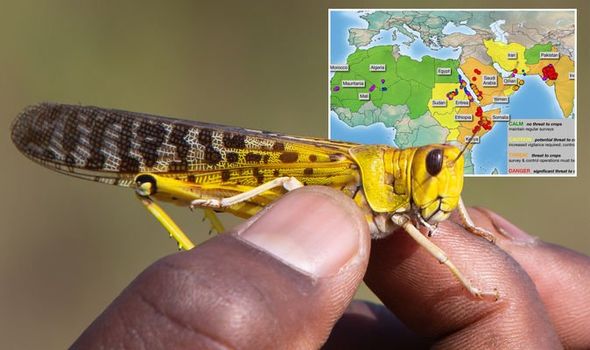 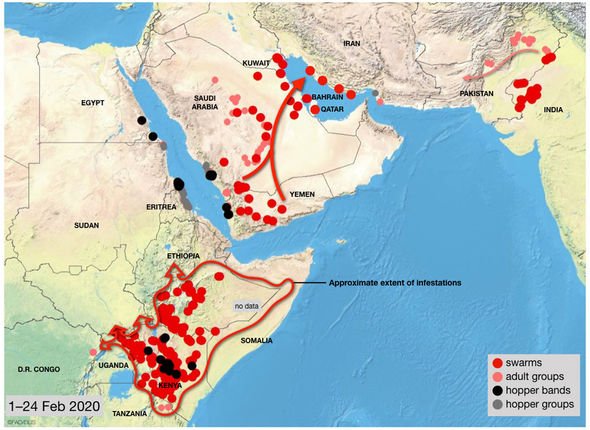 In January, the UN agency warned Africa was facing the worst locust plague in 25 years

The situation is also dire in Ethiopia, where swarms are breeding and hatching in the Somali, Oromiya, SNNPR and Rift Valley regions.

The locusts are likely to push northwards in search of food, as well as from Somalia and Kenya.

Breeding swarms have also been seen in the northeast of Somalia where “new immature swarms” are expected to form in about one week.

Uganda and Sudan have also been affected, with swarms entering from Kenya and forming near the border.

A small group of mature locusts has also arrived in the Democratic Republic of the Congo (DRC), appearing on the westerns shore of Lake Albert on February 21.

The situation remains extremely alarming in the Horn of Africa

Food and Agriculture Organization of the United Nations

The desert locust is considered the most dangerous of locust species thanks to its voracious appetite and ability to devour entire fields in short periods of time.

A single square kilometre (0.3 square miles) of desert locusts holds about 40 million insects that can eat as much as 35,000 people in a single day. 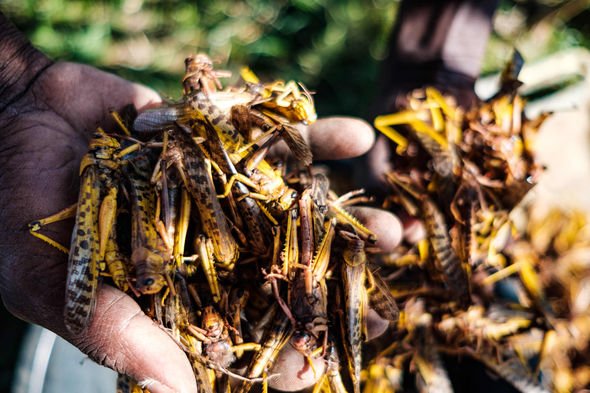 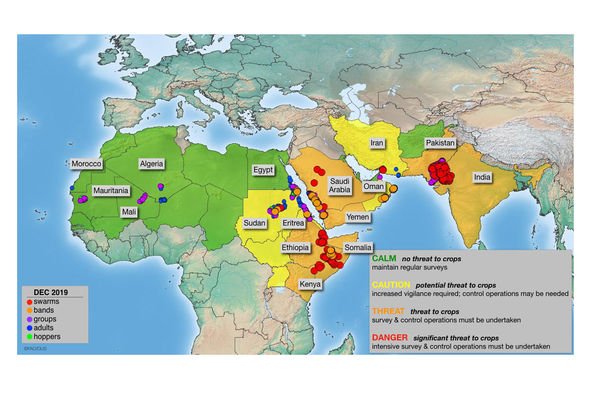 On February 20, the swarms entered the Arabian Peninsula, appearing in Kuwait, Bahrain, Qatar and parts of Iran.

Bands of locusts are being mounted along the Red Sea coast in Saudi Arabia and Yemen.

FOA said: “Immature and mature swarms were reported in the interior during this past week.

“Surveys remain limited and control could not be carried out.

“During several days of strong winds, dense immature swarms arrived in Kuwait, Bahrain, Qatar and along the southwest coast of Iran between Bushehr and Kish Island on 20 to 21 February.

“More swarms are likely during periods of southerly winds.