Incredible moment man, 22, who lost the ability to speak after a crash talks in his native Black Country accent thanks to a special voice computer

A man from Wolverhampton who lost his voice as a child has been able to speak again in his Black Country accent, with the help of a special voice computer.

Jack Smith, 22, had been using equipment that generated a ‘posh and boring’ voice that he felt did not represent his Black Country roots.

His new voice was created thanks to hundreds recordings from a volunteer with an accent similar to Mr Smith’s that was fed into communication software.

Mr Smith’s new accent was showcased to his favourite football team when he read out the names of Wolves players at a Premier League match they won. 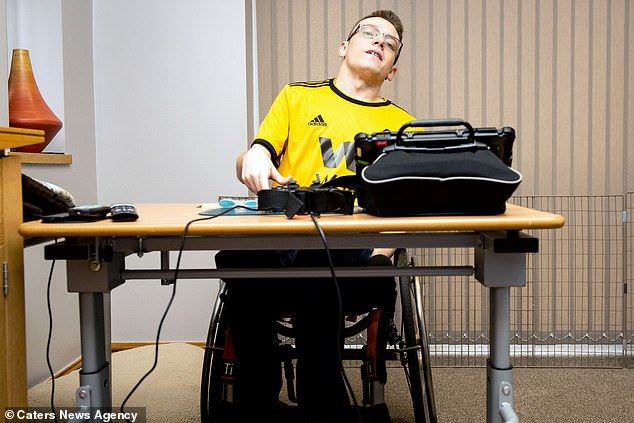 With the help of assistive technology, a man from Wolverhampton who lost his voice as a child has been able to speak in his Black Country accent. Jack Smith, 22, felt that the ‘posh and boring’ voice that he had been previously given did not represent his roots

Jack Smith was forced to use a ‘posh and boring’ robotic standard generated communication aid throughout his childhood after a car crash paralysed him and robbed him of his ability to talk.

But he always felt part of himself was missing, and went on the BBC’s The One Show to appeal for viewers to help him regain his true accent through his communication device.

He appeared on the show with three other students who all want wanted regional accents but found few age-appropriate regional voices for their communication devices.

Customisable voices are available for purchase from private companies but can be expensive with certain options costing hundreds of pounds online.

After a number of volunteers came forward, Mr Smith chose the a man called Jack McBride, an actor and forklift truck driver was one of five people who auditioned.

Mr Smith liked his voice the best, so the 23-year-old then attended National Star College to have it recorded.

Mr Mcbride recorded over 600 phrases in his own Black country dialect for Mr Smith’s device.

Mr McBride said: ‘I had seen The One Show were looking for to record someone with a Black Country Accent for a project.

‘I applied and auditioned, It was a bit like the voice – Jack and some others listened to me talk and Jack liked my voice the most so I got the offer to do it.

‘I felt bad for the recording staff, as the first time the day we did it the recordings didn’t work so they had to get me back in and listen to my voice again all day.

‘I hadn’t even thought about people with communication aids losing their accents, it really made me think, and I think It’s really given Jack his character.

‘It was for a good cause, so I was happy to do it, and his family are lovely.

‘Jack’s dad called me to thank me for what I had done for his son, but it was a pleasure.’ 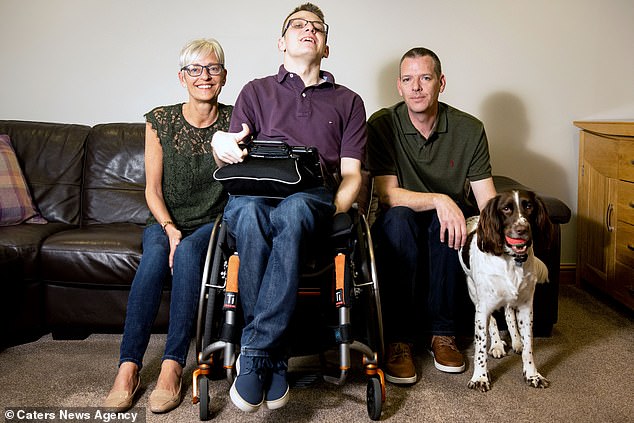 Mr Smith attends The National Star College in Cheltenham for students with disablilities with its own reserach and development initiatives for assistive technologies. The college’s website has its own team of specialist tecnologists that develop programmes for students

Mr Smith, attends The National Star College in Cheltenham for students with disablilities with its own reserach and development initiatives for assistive technologies.

The college has its own team of specialists who develop programmes for its students.

According to the National Star College’s website, ‘ technologists work with a number of developers and specialist colleges to test, trial and develop a variety of equipment.’

‘Students are given access to the latest and cutting edge technologies to trial and provide their feedback on’.

The National Star has also been a finalist in a Tech4Good Awards.

Wheelchair user Mr Smith, who now lives in Woodseaves, Staffordshire, can now speak more than 650 phrases in an accent which matches the rest of his family. 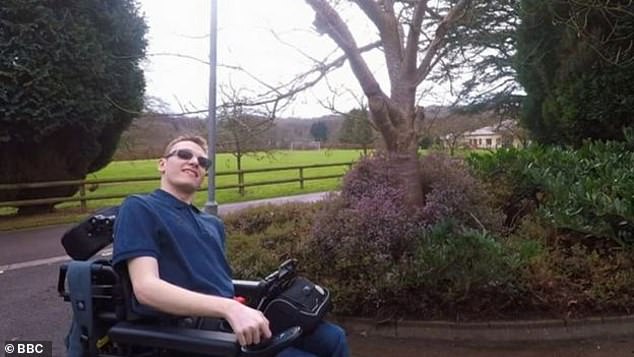 For years, 22-year-old Smith was forced to use a ‘posh and boring’ robotic standard generated communication aid throughout his childhood after a car crash paralysed him and robbed him of his ability to talk 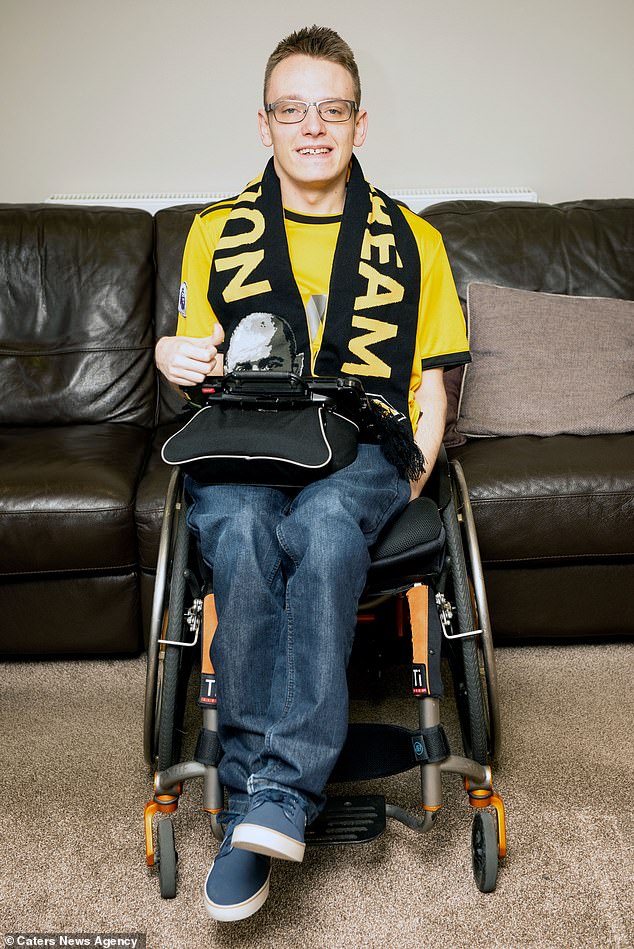 He went on BBC’s The One Show to appeal for viewers to help him regain his true accent. He appeared on the show with three other students from his college who all want wanted regional accents but found few age-appropriate regional voices to use for their communication devices

Mr Smith said: ‘I’m chuffed to bits with my new voice. I didn’t know Jack (McBride) before all of this, but he gave up his time to give me my accent – I’ll be forever grateful.

‘Everyone loves my new voice. It’s bostin’. It’s something I’ve wanted for a long time and now I sound like the rest of the family.

‘Thanks everyone, and a big thank you Jack for giving me his voice. If I could talk, I think this is how I would sound.

‘I’ve been using the voice much more since having the new accent which represents my identity.’

Mr Smith was only seven when he lost the ability to speak and the use of his legs and left arm after he was knocked over by a taxi at a crossing in Telford in 2004.

The youngster was airlifted to hospital but suffered a brain injury and has been in a wheelchair ever since.

Mr Smith is currently studying sport at the National Star College in Cheltenham, a residential college where he lives, but comes back to the Black Country at weekends to see his family.

After deciding that his communication aid had a boring voice since starting college in 2016, Mr Smith wanted his original accent back.

This was made possible by fellow Black Country resident and drama graduate Jack McBride, 23, from Brierley Hill, Dudley, who spent around seven hours recording a host of words and phrases for the speaking aid after 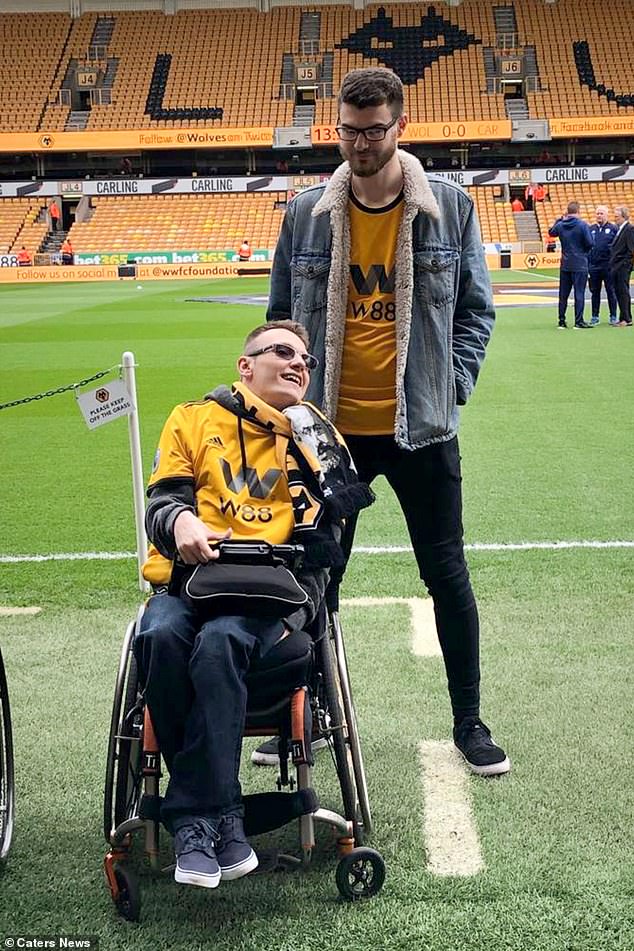 An avid Wolves football club fan, Mr Smith read out the team’s names in his new voice, with the players’ names having to be pre-programmed into the computer

Mr Smith’s mum Jo Smith, 49, a prison worker, said: ‘It’s like listening to a real person, rather than a computer, it’s brilliant.

‘The fact that five people turned up to offer their voices was just brilliant. We can’t thank Jack McBride enough.’

Mr Smith’s dad Andy Ball added: ‘Jack’s over the moon with his voice. When he used the device, it sounded just like our local accent.

‘Jack uses the buttons to access the Black Country phrases.

‘When they are in a classroom, if six people have communicators you don’t know who said what.

‘We listened to a radio show and it was four students speaking using communication devices, but you didn’t know who was talking.

‘Now you know it’s Jack right away. He definitely has got a part of himself back.’

When avid Wolves fan Mr Smith  read out the teams in his new voice on Saturday, the players had to be pre-programmed into the computer – with captain Conor Coady proving the hardest to say.

Andy added: ‘With his talk box, what a lot of people don’t realise is that it’s all pre-programmed so we’ve had to programme the whole teams.

‘Sometimes it doesn’t sound like what the player is called – Conor Coady was one of the worst – it just would not say ‘Coady’.

‘The Portuguese players were fine, but it didn’t like saying Coady.’

The avid Wolves fan was even able to read out the team names in his new voice at the Premier League team’s 2-0 win again Cardiff on Saturday [March 2].