The NASA photos shed light onto the geological processes that have shaped the surface of Mars for millions of years. Believed to have once resembled a young Earth, Mars today is a barren landscape of sand, rock and frozen ice deposits. In a series of photos snapped by NASA’s Mars Reconnaissance Orbiter (MRO), researchers have shown how these features form intricate and outright alien patterns on the planet’s surface.

The Mars photos were shared by the University of Arizona in the US.

Together with NASA, the university manages the High Resolution Imaging Science Experiment or HiRISE – the most powerful camera ever sent to another planet.

NASA’s MRO has so far spent 13 years and eight months above Mars, capturing more than 368 terabits or 46,000 gigabytes of data.

In one of its photos, the spacecraft photographed a “Martian Game Board” in the planet’s Northern Hemisphere. 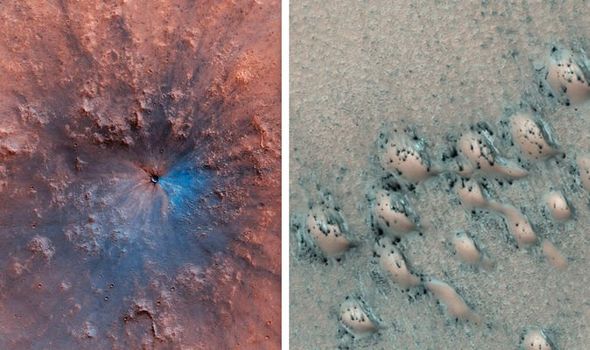 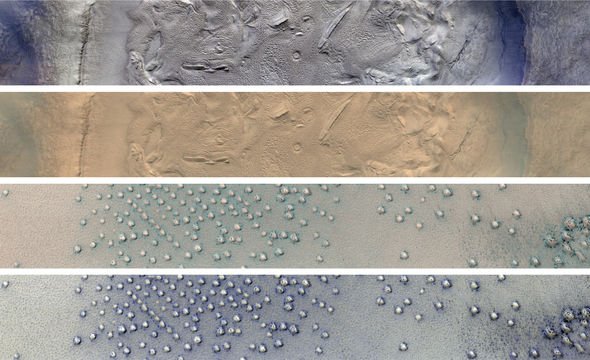 When viewed from orbit, the picture appears to show dozens of little figures assembled on a tabletop surface.

Up-close, however, the “unearthly scene” reveals a large collection of ice-covered dunes.

Ken Herkenhoff from the University of Arizona said: “It’s spring in the Northern Hemisphere of Mars, and the polar region is still blanketed by seasonal carbon dioxide frost – dry ice.

“This image shows an area near the sane sea – called an ‘erg’ – that is surrounding the water ice-rich layered deposits.

“The many bumps are sand dunes less than 100m across that are mostly covered by seasonal frost, appearing in a manner that looks artificial but is a natural consequence of the wind patterns in the region.”

The darker spots or blotches on the dunes are the result of icy layers subliming back into a gas.

The combination of these features makes for an unearthly scene

When the patches of ice disappear, they expose the darker surface hidden underneath.

Mr Herkenhoff said: “The combination of these features makes for an unearthly scene.”

In another HiRISE picture, the MRO snapped a beautiful crater filled with deposits of icy water mixed with Martian dust. 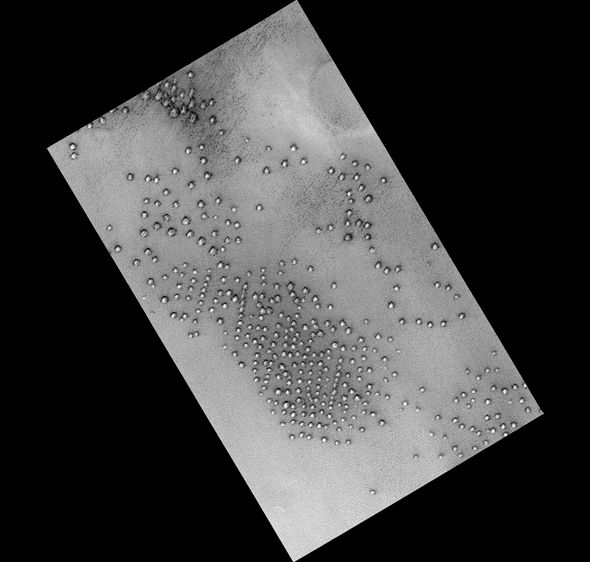 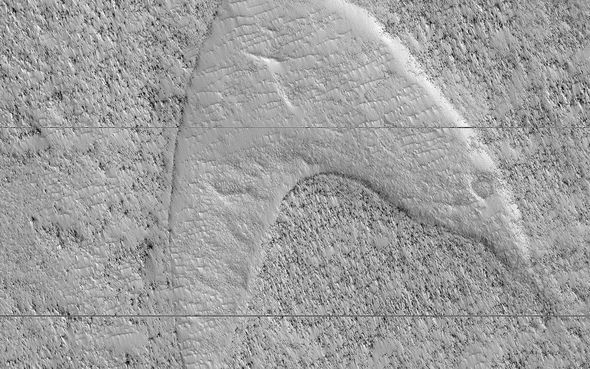 These icy deposits of water can be “tens of metres thick” and are abundant around the Red Planet’s mid-latitudes.

The more dust covers the icy deposits, the more likely they are to survive the planet’s harsh surface conditions.

Dan Berman from the University of Arizona said: “These mantling deposits are thought to have been mobilised from the polar caps and redeposited from the atmosphere millions of years ago during periods when Mars’ axial tilt was higher than it is today.

“The floor of this crater appears filled with such deposits, as evidenced by surface textures such as pits, hollows, grooves and other small filled craters.

“The material has undergone viscous flows, resulting in many curved ridges.

“Much of the original ice may have been lost to sublimation but it is likely that a significant amount of ice remains.”

The possibility of finding water on Mars is exciting because scientists consider it to be one of the main building blocks of life.

If the Red Planet once resembled Earth with a hot and humid climate, some researchers speculate it may have given birth to primitive forms of microbial life.