Look up this week! UK stargazers will get their best view of Mars in a DECADE as it appears brighter than any star before disappearing behind the moon on Thursday

This week stargazers in the UK will get the best view of Mars on offer this decade – and they won’t need a telescope.

The Red Planet will be in opposition on Thursday morning – meaning it’ll be located in the opposite direction to the sun, relative to Earth.

It will appear bigger and brighter in the sky because it’ll be at its closest point to Earth – around 50 million miles (81 million km) away.

Coincidentally, on 4.58am GMT on Thursday morning, Mars will disappear behind the full moon – an event known as an occultation – before reappearing at 5:59am. 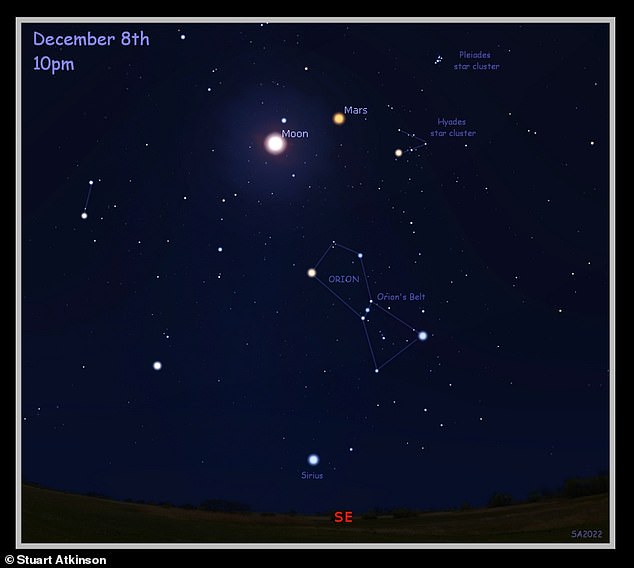 In the first part of December northern hemisphere observers will enjoy their best view of Mars until the 2030s. The red planet will be high in UK skies and will appear brighter than any star. It will be unmistakable in front of the stars of Taurus, from the UK above the familiar pattern of Orion

According to Dr Robert Massey at the Royal Astronomical Society, the public will easily be able to see Mars under clear skies this week by looking east.

For people in the UK and other parts of the Northern Hemisphere, there won’t be as good a view of Mars again until the 2030s.

Like all the planets in our solar system, Earth and Mars orbit the sun. But Earth is closer to the sun, and therefore races along its orbit more quickly.

So sometimes the two planets are on opposite sides of the sun, very far apart, and other times, Earth catches up with its neighbour and passes relatively close to it.

These Mars oppositions – when Earth orbits between the Sun and Mars – occur about every 26 months.

‘If you want to see Mars, go out after sunset when it’s dark and look east,’ Dr Massey told MailOnline.

‘It will be really obvious if you’ve got a clear sky – a brilliant red dot.’

Dr Massey said there are two events involving Mars that are happening together on Thursday – ‘occultation’ and ‘opposition’.

Occultation is the name given to the moon blocking Mars, while opposition is Earth being between the sun and Mars.

Because of the orbits of the two planets, opposition occurs about every 26 months, but occultation and opposition happening together is much rarer and ‘very unusual’, Dr Massey said.

On Thursday, the exact point that opposition happens is at 5:35am – so a little over half way through the occultation, while Mars is behind the moon.

‘But the planet is close throughout December and it’ll be obvious through January too,’ he added.

The ‘elliptical’ (not perfectly circular) orbit of Mars means some oppositions are better than others, and for the rest of this decade the planet will be further away than it is this month. 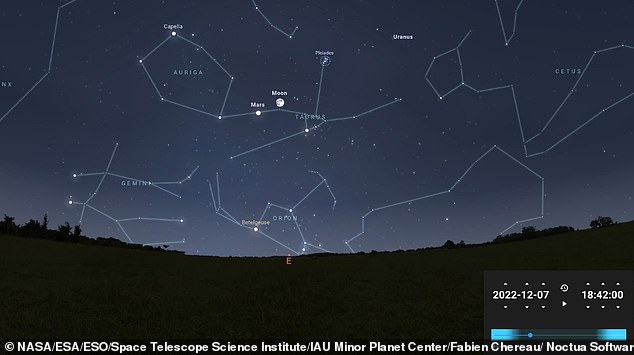 This sky map shows Mars rising into the eastern. sky and appearing a bright orange colour as it will do this week. The view here shows what it will look like at 6:42pm on December 7 from London 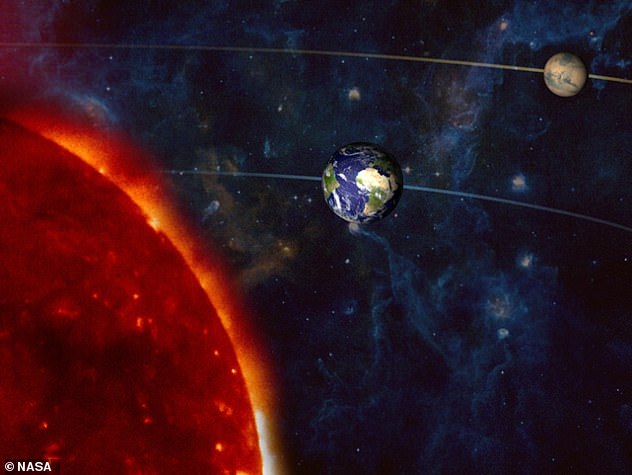 Like all the planets in our solar system, Earth and Mars orbit the sun. But Earth is closer to the sun, and therefore races along its orbit more quickly. Earth makes two trips around the sun in about the same amount of time that Mars takes to make one trip (687 Earth days). So sometimes the two planets are on opposite sides of the sun, very far apart, and other times, Earth catches up with its neighbour and passes relatively close to it. These Mars oppositions – when Earth orbits between the Sun and Mars – occur about every 26 months 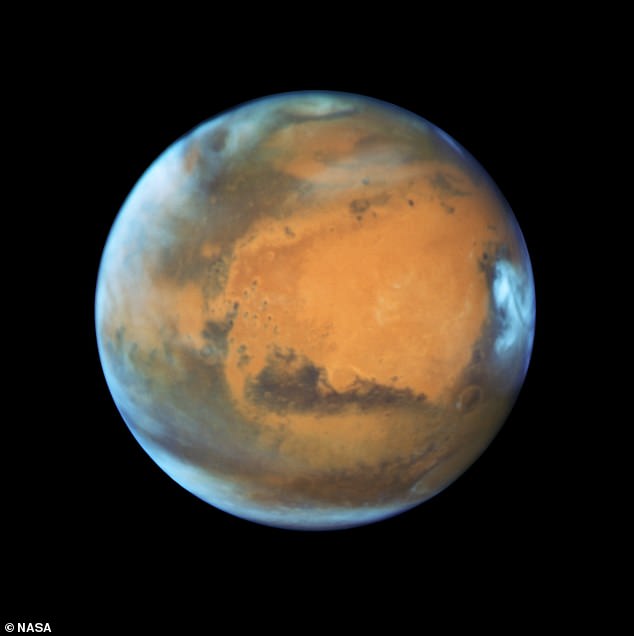 The Red Planet is in opposition – meaning when viewed from Earth it’s opposite the sun in the sky so it’s shining brightly. Pictured, Mars captured by the Hubble telescope

The further up you are, the better your chance of a clear sky to see the stars.

Take a hike in your local area and explore the surroundings to find the perfect stargazing spot!

The further you are away from light pollution the better chance you’ll have of seeing the stars.

Moons always rise in the east and set in the west – so follow this direction in your search.

Turn off the lights

For those stargazing from the comfort of their homes, turning off the lights indoors can improve the visibility of the night sky, so long as you’re not afraid of the dark!

Artificial light can make it harder to see stars in the sky so make sure wherever you are is as dark as possible.

Throughout the night on Thursday, Mars will get closer and closer to the moon before disappearing behind it (‘occultation’) at 4.58am.

‘In the hours before that occultation takes place the moon will be just to the right of it [Mars] in the sky,’ Dr Massey said.

‘If you were to stay up later and later it will get closer and closer until it covers it.’

Aside from the UK, Mars (and its occultation by the moon) will be visible in other parts of western Europe, North America and north Africa.

Although Mars will easily be seen with the naked eye, the public will get a better view of its surface with a small telescope.

Looking through a telescope, careful observers will be able to see the polar ice caps and dark markings on its surface.

‘People want to know when they’ve seen planets and this is a really good chance to go out and look at Mars,’ said Dr Massey.

‘There might once have been life there and there might just still be simple life there today, so if you want to know where that is this is the time to go out and look for it.

The moon will also be full, at 100 per cent illumination, on Wednesday and Thursday this week. 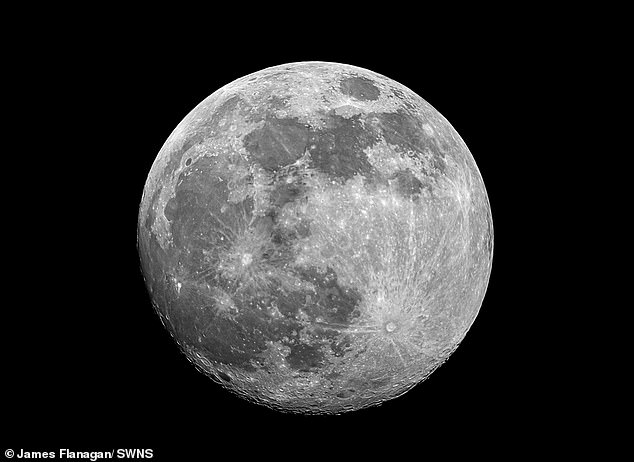 The moon will also be full, at 100 per cent illumination, on Wednesday and Thursday this week

A full moon occurs once every 29.5 days – the length of time it takes for the Moon to go through a whole lunar cycle.

When the full moon arrives in February, astronomers give it the name ‘Cold Moon’ because it often coincides with the longest nights of the year.

Other names include the Snow Moon in February to coincide with heavy snow and the Worm Moon in March at a time when the Sun increasingly warmed the soil and earthworms became active.