Millions of mature human cells are generated inside a mouse embryo

Scientists say they have been able to produce millions of mature human cells in a mouse embryo for the first time.

The researchers injected human stem cells into a mouse embryo, which then generated millions of mature human cells as it developed.

The researchers claim that up to four per cent of the total number of cells in the mouse embryo were human cells.

Previous efforts to produce human cells in mouse embryos have only generated small amounts of immature cells that are hard to quantify.

The cells could be used to treat chronic diseases, such as diabetes or kidney failure, by replacing a patient’s damaged cells with healthy human cells or tissues.

They could also be used to create more effective mouse models to study diseases that gravely affect humans, such as malaria or COVID-19. 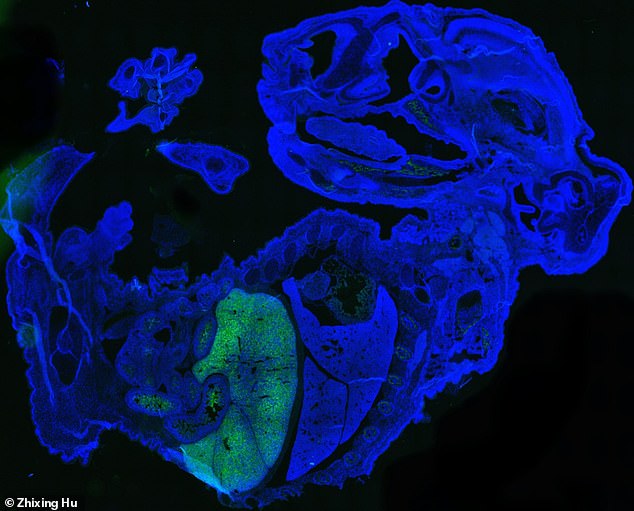 This incredible image shows a large quantity of human cells (labelled green) in a 17-day old mouse embryo (blue). Most of the human cells are red blood cells, which are accumulated in the mouse fetal liver

‘This is fundamental research that allows us to use the mouse embryo to help us better understand human development,’ said Dr Jian Feng, professor of physiology and biophysics in the Jacobs School of Medicine and Biomedical Sciences at University of Buffalo (UB).

‘We have a lot of questions to answer before the technology can be useful, but this is the first time that anyone has generated so many mature human cells in a mouse embryo.’

WHAT ARE STEM CELLS?

Stem cells are special human cells that have the ability to develop into many different cell types, from muscle cells to brain cells.

In some cases, they also have the ability to repair damaged tissues.

Embryonic stem cells can become all cell types of the body because they are pluripotent – they can give rise to many different cell types.

Adult stem cells are found in most adult tissues, such as bone marrow or fat but have a more limited ability to give rise to various cells of the body.

Meanwhile, induced pluripotent stem cells (iPSCs) are adult cells that have been genetically reprogrammed to be more like embryonic stem cells.

The research team claims it could be possible to use the new method to produce mice with even more mature human red blood cells.

Such mice would be very effective in the study of malaria, a disease which affects only humans by destroying our red blood cells.

‘Further development of our technology could enable the generation of even larger quantities of specific types of mature human cells to allow us to create more effective mouse models to study diseases that gravely affect humans, such as malaria or COVID-19,’ Dr Feng said.

Previously, the disease-curing potential of human stem cells has been thwarted by the inability to produce sufficient quantities of mature human cells in vivo – in a living organism.

Producing human cells in vivo is critical because cells made in vitro – in lab equipment such as a tube or petri dish – often do not behave the same way that cells do in the body.

Researchers injected 10 to 12 immature human stem cells into a mouse blastocyst – an early-stage embryo – which then generated millions of mature human cells, including red blood cells, eye cells and liver cells, as it developed.

‘We know that up to four per cent of the total number of cells in the mouse embryo were human cells,’ said Feng.

‘This is a low estimate because we cannot quantify the large amount of human red blood cells generated in the mouse embryo.’ 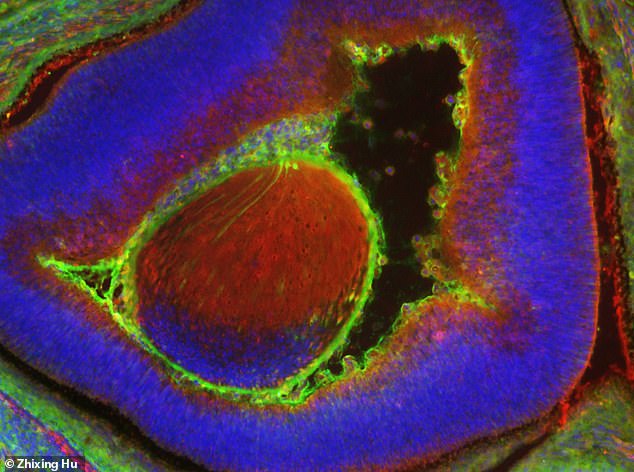 Because these mature human red blood cells do not have a nucleus, they are not counted by the method that the scientists use to quantify the total number of cells.

The team’s technique involved overcoming an important challenge – converting ‘pluripotent’ human stem cells into a form that makes them compatible with the inner cell mass of a mouse blastocyst.

Pluripotency – the capacity for a stem cell to develop into any cell type in the body – can be described by a range of states, from ‘naïve’ to ‘primed’.

The human stem cells are in a ‘primed’ state, whereas the inner cell mass inside the mouse blastocyst is in a ‘naïve’ state – and therein lies the key obstacle.

When the primed human cells are put into the mouse blastocyst, they fail to develop, likely due to the mismatch between the cells’ different developmental stages.

‘We wanted to see if it was possible for the human primed cells to go back to the naïve state, just like the pluripotent stem cells inside a mouse blastocyst,’ said Feng.

‘This is what we have done.’

The research team’s method temporarily inhibits a key enzyme – the mTOR kinase – for three hours to ‘shock’ the human primed cells into the naïve state.

‘Blocking the mTOR kinase triggers a series of events that rewire gene expression and cellular metabolism so that the primed cells become naïve,’ said Dr Feng.

Converting the later stage human primed stem cells back to an earlier, less developed naïve state allowed the human stem cells to co-develop with the inner cell mass in a mouse blastocyst.

Out of 13 rounds of injection into fertilised mouse eggs, 10 generated mature human cells representing all three ‘primary germ layers’ – the three layers of cells that form during embryonic development and from which all organs and tissues develop.

‘The injected human stem cells now develop at the much more rapid pace of the mouse embryo, supporting the generation of millions of mature human cells in 17 days,’ said Dr Feng.

By the middle of the seventeenth embryonic day, at which point each of the experiments were concluded, 14 embryos contained between 0.1 and 4 per cent of human DNA.

The study authors note the need to carefully weigh ethical considerations as research in this area progresses.

The study has been published in Science Advances.

Stem cells, often dubbed the building blocks of life, are cells that have the ability to develop into different cell types.

Scientists can take stem cells from adult tissue such as bone marrow but the most controversial type are embryonic stem cells, which come from human embryos.

Stem cells are also taken from the umbilical cord placenta, which is considered throw away tissue.

Stem cell research was much hyped a decade ago as the miracle cure for degenerative diseases, like Parkinson’s.

But things turned sour when the therapy became mired in controversy over the use of stem cells derived from the fetuses of aborted babies.

Embryonic stem cells quickly became a divisive and highly-politicised issue in the US.

cells, human, mature, millions, of
You may also like: